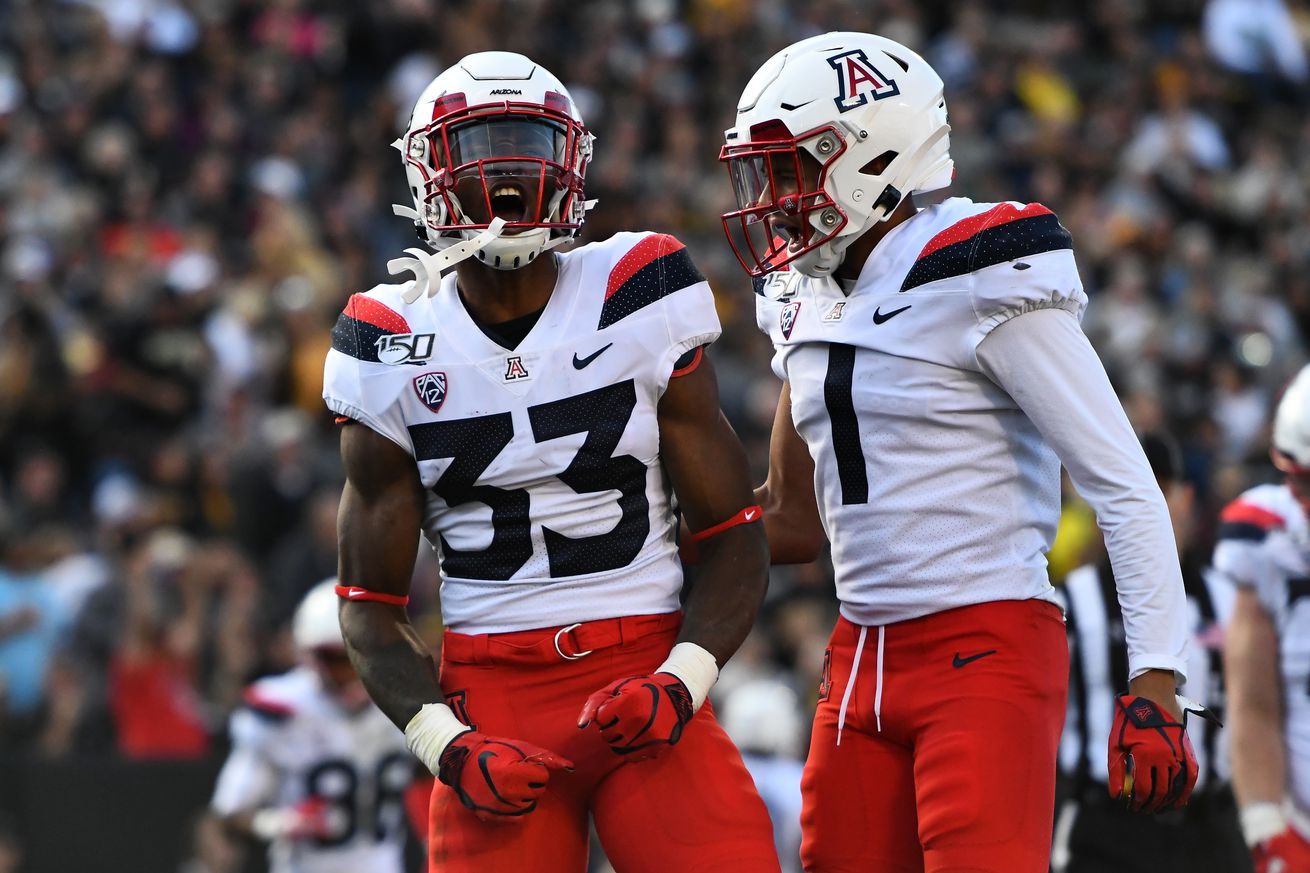 We already took a look at the five, really six, most important players are for the Arizona Wildcats on offense and defense this season. This time around, we will delve into the players who are poised to break out this season.

Curry’s development was hindered last season from a shoulder injury he suffered near the end of fall camp. That injury delayed his debut on the field, but he eventually made his way into playing time.

This season is different. From all accounts, Curry has had a wonderful camp. He is fully healthy and is learning to use his size and strength to become an effective Pac-12 receiver. He has all but solidified his spot on the outside and gives Grant Gunnell a massive weapon.

Speaking of Gunnell. Curry has been a close, long-time friend of the Gunnell’s for some time. Grant and Boobie have a very deep and close bond that I’d expect to show up on the field.

Wiley started to carve out a niche as a reliable pass catcher out of the backfield during his freshman campaign last season. He wasn’t as effective as a runner…but somehow….I think that’ll change this season.

Wiley has added more size and strength…and size this offseason. Wiley has easily gained anywhere from 15 to 20 pounds of muscle this offseason and has been more authoritative while running. He will look to split time with Gary Brightwell, as well as the next player on our list.

Tilford is going on his fourth year with the program and has easily been one of the most clamored about players by fans. And rightfully so. He is quite the physical specimen and has shown some great power and speed at times. His biggest hurtle has been the little nuances of the running back position at the Power Five level.

I think this year will be different for Tilford. A.J. Steward is a fantastic coach and knows how to coach to his player’s strengths. Tilford is poised to be one of the most used backs this season, along with Brightwell and Wiley. That makes this season ripe for the taking for Tilford.

Miller was a great addition for the Wildcats and has made a great impression with his teammates and coaches alike. In fact, he has done so well that he was able to make the depth chart for the canceled game against Utah last week.

This is really good to see. I personally wanted to see how Miller developed in high school, especially since his high school (Peoria-Centennial) was not a pass first offense. That he was able to make such a strong impression early, in a surprisingly deep position group, is a good sign.

Morgan is someone I’m really excited to see. He is an athletic tackle with incredible upside. He has just started to tap into his potential and you are starting to see that with him being rewarded with the starting left tackle job. That is one of the most important positions on the field that requires a lot of trust from your teammates and coaches.

Donovan Laie is an NFL-caliber offensive lineman. I don’t think Morgan is that far behind him.

The freshman backer is getting thrown into the fire, but it appears he is ready. His name was probably the most common of the newcomers to hear this camp. He was a heck of a steal for the ‘Cats when he committed, and I said so as much back then. He is built unlike any backer that is on Arizona’s roster right now, sitting at 6-foot-3 and 229 pounds.

He will be playing inside with Anthony Pandy and he couldn’t ask for a better mentor and leader playing alongside him. I’m really interested to see how he handles the starting job. My initial thoughts are that he will be able to step up to the challenge.

After redshirting last year with a little bit of game experience thrown in, Watson will get his shot this season. He will be starting at the SAM backer spot in the new defense and, to be honest, that fits his skillset more than playing defensive end. He has done a good job of gaining weight as well, adding on 20 pounds from last season.

Watson is a legit pass rusher, much like Jalen Harris, but he is athletic enough to drop back in coverage if needed. Naturally, with that combination of skills, he will be starting at the SAM backer spot, which will include some pass coverage.

Turner is a freak athlete, coming from both a football and basketball background. His freshman season, and subsequent development, was cut short last season due to a shoulder injury. He had surgery on the bum shoulder and is healthy and ready to go. He has had a good camp and was able to snag the starting strong safety spot from incumbent Christian Young.

Turner is faster than you might think and has a knack for making plays on the ball. Now that he is healthy, I can’t wait to see what he does.

Another name that has been around for awhile, Short is on the verge of not only getting the first playing time of his career, but breaking out as well. He was labeled as a co-starter with Jarrius Wallace at the free safety spot for the Utah game. That is a good sign. Word is he had himself a very good camp and has made leaps and bound from last season.

Short is someone who was patient and worked, biding his time. Now it appears his time has come.

Barrs burst onto the scene last year as a true freshman. Another late steal for Arizona, Barrs quickly worked his way up the depth chart and held his own. He is now up to a better playing weight, and honestly, is in good shape. He is on tabs to start as the defensive tackle for the ‘Cats and will be surrounded by experience with Roy Lopez and Aaron Blackwell taking the other defensive line spots. Barrs may have made an impact last season, but I believe this’ll be the year that we are able to see what he can really do.