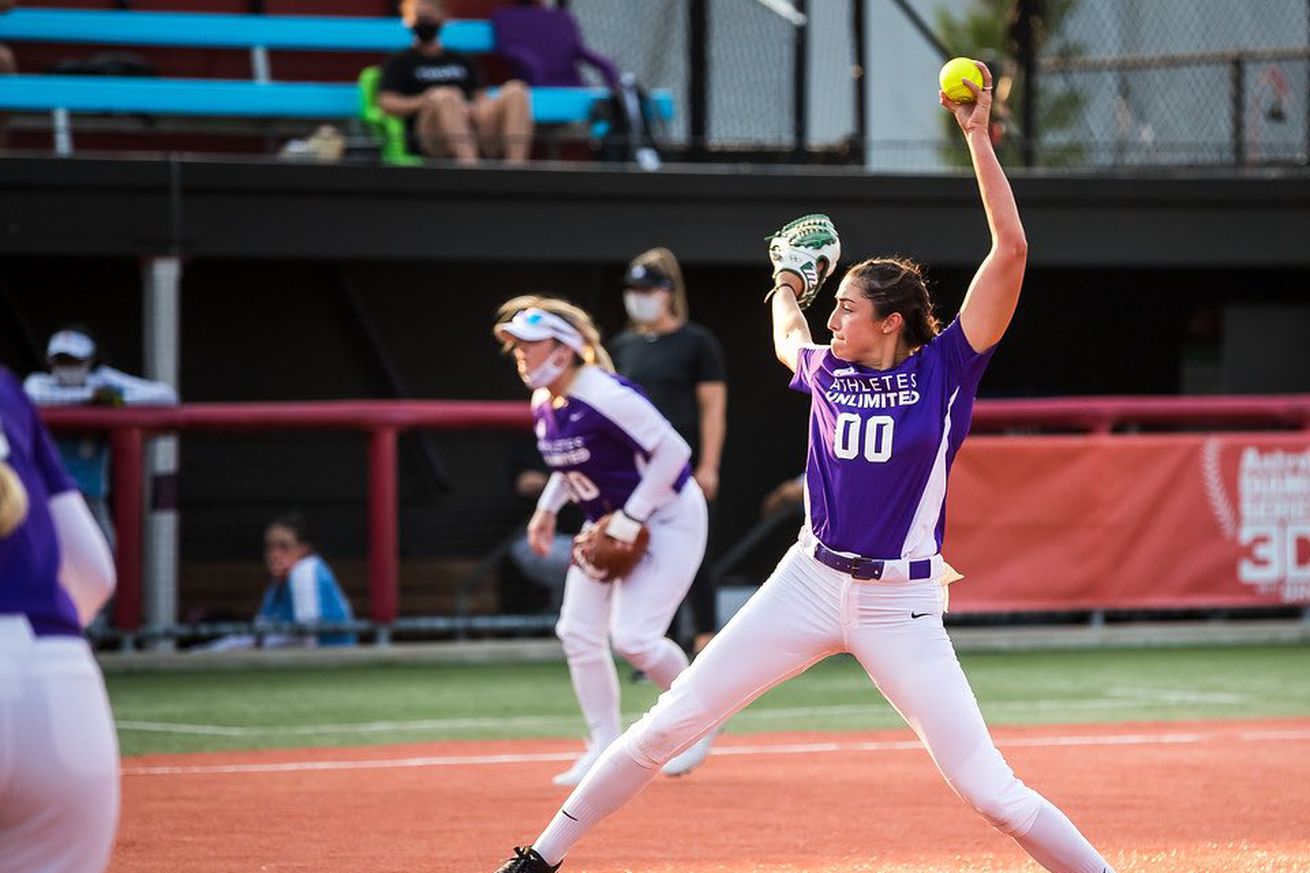 The league features 56 athletes and four teams that are re-drafted each week, with the top performers serving as the team captains.

Points are earned through individual stats, innings won, and team wins. At the end of the season, players will be ranked individually by points, with cash bonuses and MVP titles awarded to the top scorers.

This league-produced graphic breaks it all down:

The inaugural season begins Saturday and runs through Sept. 28. Thirty games (15 doubleheaders) will be played over five weeks at the Parkway Bank Sports Complex in Rosemont, Illinois, which is located on 27 Jennie Finch Way.

Holding games in a central location reduces the risk of a coronavirus outbreak. Players are also tested twice a week and provided housing to help shield them from the outside world.

Every game will be broadcast on CBS Sports Network, ESPN2, ESPNU or ESPN3, a big deal for a sport that has struggled to get exposure at the pro level.

Saturday’s season openers will air on ESPNU, with Team Warren taking on Team Fagan at 10 a.m. PST and Team Wagner and Team Pendley rounding out the doubleheader at 1 p.m. PST. (The full season schedule can be found HERE.)

“This new league has given so many women the opportunity to be in charge of their own career,” O’Toole said in a statement. “In doing so, the platform for women’s sports has grown in just a few short months.”

For O’Toole and fellow left-hander McQuillin, this is also a key part of their preparation for the Tokyo Olympics. They are two of six members of the Mexican National Team playing in Athletes Unlimited. Several Team USA players are in the league as well.

The Olympics were supposed to be held in July, but were postponed a year due to the coronavirus pandemic.

“I am excited to not only play with my fellow teammates, but with athletes from multiple countries who will be participating in Tokyo as well,” said O’Toole, the 2017 Pac-12 Pitcher of the Year. “In preparation for 2021, these next six weeks will be priceless for many of us.”

Added McQuillin: “We are getting the best of the best competition, where all the players in the league are top notch.”

McQuillin also hopes Athletes Unlimited inspires the next generation of players and paves the way for more pro opportunities for female athletes in the future.

“The goal is to get softball viewed professionally the way people view softball collegiately,” she said in a statement. “Growing the game will allow a higher number of viewers past the college level and extend softball beyond that.”

McQuillin and O’Toole, both All-Americans at Arizona, were teammates in 2016 and 2017.

Mauga and Perez were among UA’s best hitters those years.

Together, they helped the Wildcats capture the 2017 Pac-12 championship, their first conference title in a decade.

Mauga graduated second in NCAA history in home runs (92), blasting 20 or more in all four seasons at Arizona, including 25 as a senior when she sported a .356 batting average—and a ridiculous .507 on-base percentage because she was intentionally walked a lot.

A speedy lefty with pop, Perez batted .387 that year, with six homers and a sparkling .491 on-base percentage in the leadoff spot.

Mauga and Perez played professionally for a year after graduating in 2017—Mauga for the Scrap Yard Dawgs and Perez for the USSSA Pride.

Mauga spent the 2020 college season as a volunteer coach at Mississippi State, an SEC rival of Arkansas, where McQuillin was on staff as a graduate assistant.

O’Toole and McQuillin pitched in National Pro Fastpitch last season, but that league canceled its 2020 campaign due to the pandemic, opening the door for Athletes Unlimited to begin a new, though radically different, chapter of pro softball.

“Athletes Unlimited has worked hard to get us not only what we need as athletes, but what we need as professionals, and a big factor is TV time,” said O’Toole, who coached at the University of San Diego and now gives pitching lessons. “For the younger generation to watch us, to dream like we did, it’s a blessing.”