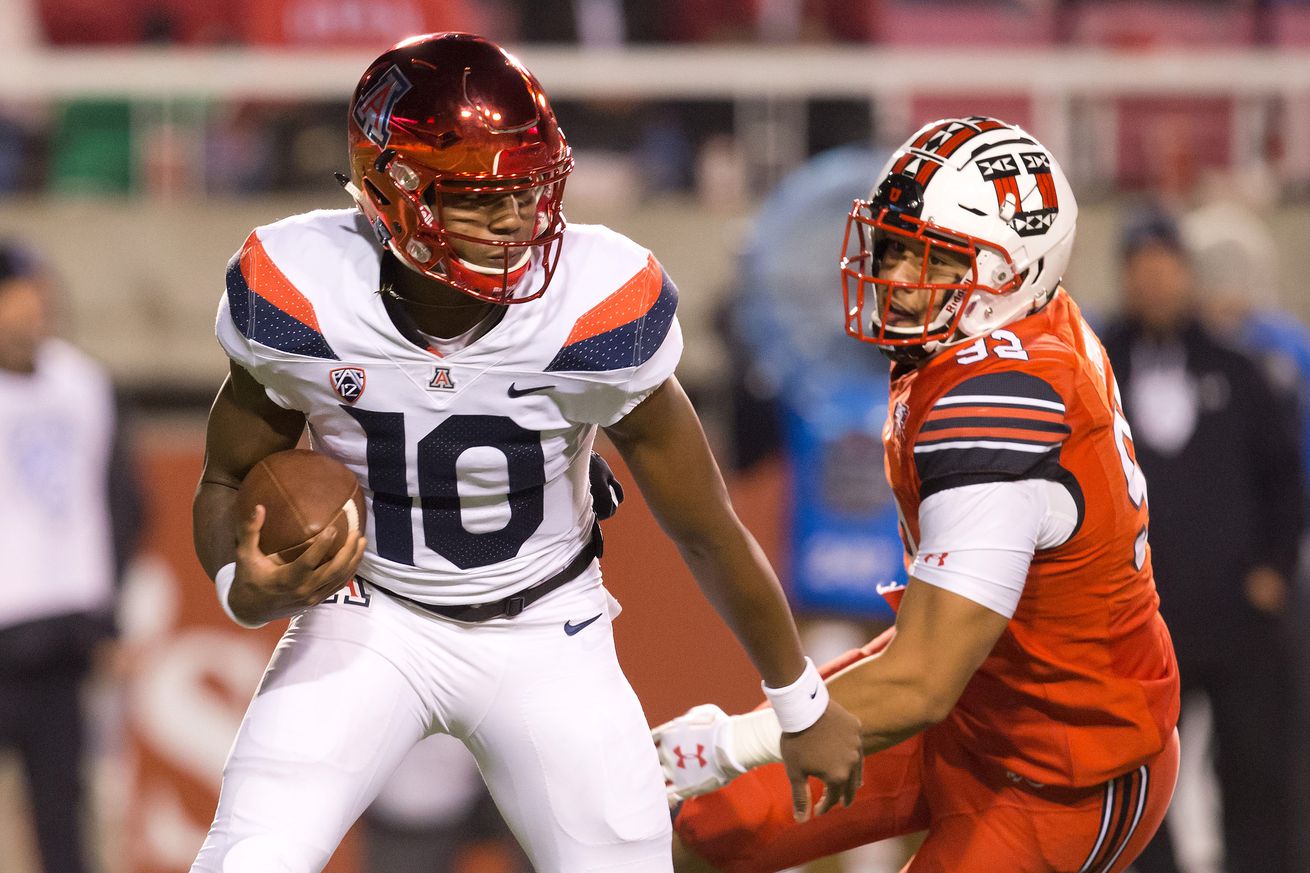 We finally have an Arizona Wildcats football schedule. Which replaces the previous schedule that came out in July. Which took the place of the original one released nearly a year ago.

So it goes for the Pac-12 in a pandemic.

The conference, which announced a little over a week ago that it was bringing football back this fall, revealed its shortened slate on Saturday. The 6-game slate (with a seventh matchup to be determined) begins Nov. 7 and runs through the third weekend of December.

Our schedule announcement story can be found here. Below are some things that stand out about the slate:

The gauntlet is early

With only six games it should be harder to break a schedule down into easy and tough stretches, yet Arizona’s has a clear delineation: it starts out very difficult.

Three of the Wildcats’ first four games are on the road, including at defending South Division champion Utah and at Washington on Nov. 21. Wedged in between is a Nov. 14 visit from USC, whom Arizona hasn’t beaten since 2012.

The Nov. 28 trip to UCLA can be considered Arizona’s easiest road game, but that’s a relative term. The Wildcats haven’t won at the Rose Bowl since 2010 and haven’t claimed victory on a grass surface other than Colorado’s Folsom Field since 2012.

Arizona is the only Pac-12 team that will play three of its first four on the road, but as a result is the only one to end with two straight at home. At least it won’t have to play in any of the league’s colder locales in December, so there’s that.

It could have been harder

Based on how the SEC protected its top teams by giving them the easiest possible extra opponents for its 10-game schedule, it seemed likely the Pac-12 would go the same route and ensure its best clubs got the weakest crossover foes.

Instead, the Wildcats go to Washington, which is probably the second-toughest North Division team behind the Ducks (who get UCLA at home for their crossover game).

Had the UA been matched up with someone from the bottom tier of the North, like Oregon State or Washington State, the chances of being able to pick up another win would have been much higher. Instead it’s tasked with trying to win in Seattle for the first time since 2007.

Other than the occasional bowl game, December contests are not common for Arizona. Its last time playing in the regular season in that month was the forgettable 2014 Pac-12 title game loss to Oregon, and 2010 was the last time the Wildcats played at home in December (losing 30-29 to ASU).

But nothing is impossible in 2020, which is why Arizona has two December home games to end the season against Colorado (Dec. 5) and ASU (Dec. 11).

A third could be in line, depending on who the Wildcats would match up against—and where it would be—for the seventh game that’s to be determined based on final division standings.

From earliest Territorial Cup to latest

When the Pac-12 released its 10-game conference only schedule back in late July, only to cancel football less than two weeks later, the 94th Territorial Cup between Arizona and ASU was set for Sept. 26. That would have been the earliest the teams had ever played in a season.

Now their scheduled meeting will be the latest it’s ever been in a year, on Dec. 11, a Friday. The Cup has been contested in December four previous times, including thrice between 2007-10, yet Arizona is only 1-3 in those instances.

As of now there are no kickoff times, so we’ll have to wait a little longer to find out how many of Arizona’s games land in #Pac12AfterDark territory. The ASU game, being on a Friday, is almost certain to be at night, and it wouldn’t be surprising to have most (if not all) of the others kick off with the sun down. That’s just how it is for the UA.

Will the Wildcats be a part of a morning start? The ASU/USC opener on Nov. 7 will be played at 9 a.m. PST (10 a.m. in Tucson) on Fox, and it stands to reason at least one other Pac-12 game will be in that early time slot.

If Arizona were to be in one it would probably be at home, both because that would mean a 10 a.m. start and because neither UCLA or Washington have seemed keen on hosting such games. That means the best chance would be Dec. 5 vs. Colorado.

Ironically, Colorado was Arizona’s opponent the last time it started before noon in Tucson, in November 2012. Most notable from that game: Ka’Deem Carey ran for a school and conference-record 366 yards in the 56-31 win.

If there’s one good thing about the shortened, delayed 2020 schedule, it’s that every Pac-12 game will be shown on a TV channel that nearly the entire country gets. The league said in its news release that all games will be on an ESPN or Fox network, meaning zero will be relegated to the Pac-12 Network, which is not on every cable package.

Unfortunately, this is probably just a 2020-only scenario. The Pac-12 has lucrative contracts with ESPN and Fox, contracts that require a certain number of games be shown on those networks, and with only 42 contests (including the TBD Week 7 ones) the entire inventory goes to them. Expect 2021 football games to be back on that channel, along with plenty of basketball this winter.