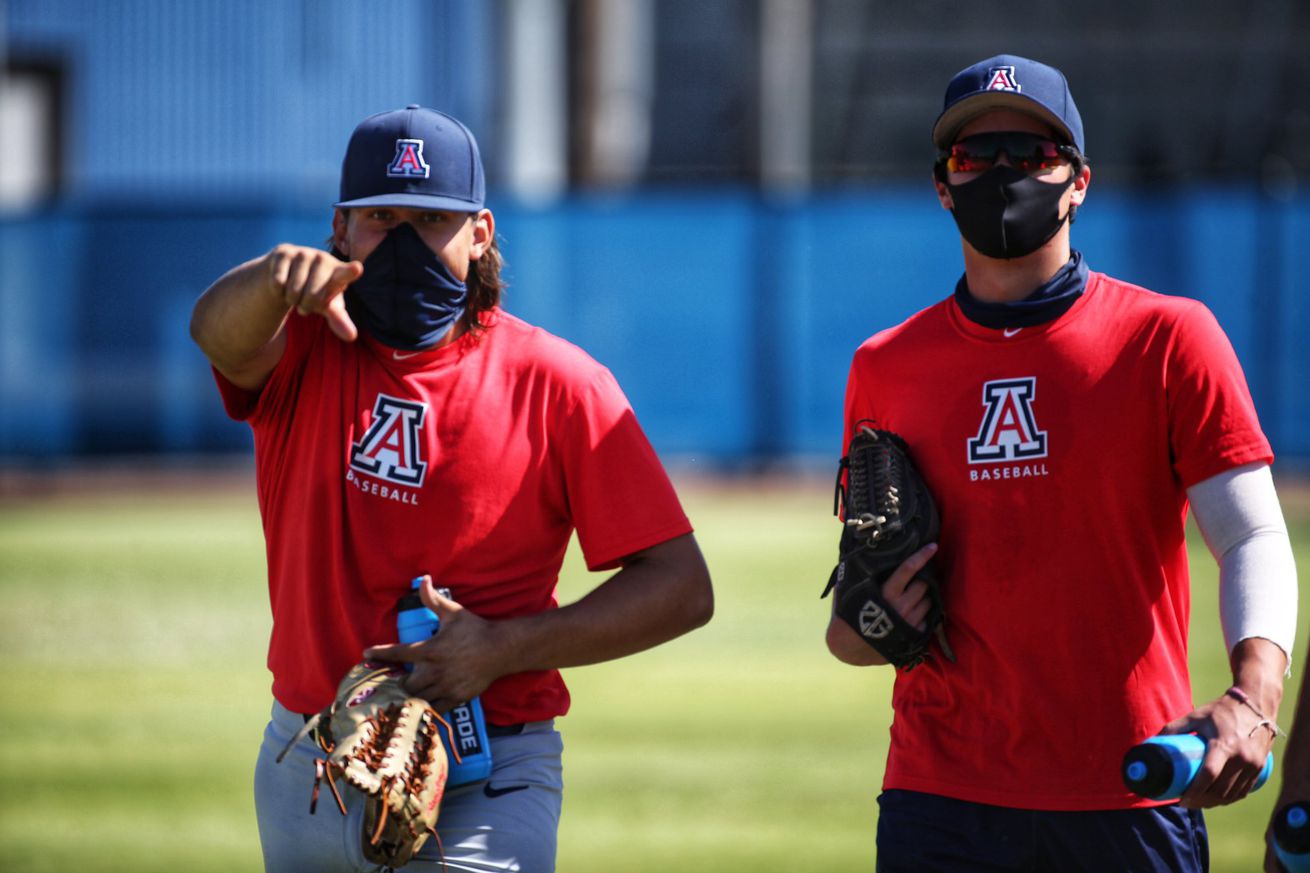 The Arizona Wildcats were all set for a huge home series against Oregon State to start Pac-12 play back in March when, like everything else in college sports, COVID-19 shut things down.

Seven months later, the UA baseball team has finally returned to the practice field in hopes that its 2021 season can be played as planned.

Fall practice began for the Wildcats this past weekend, the first chance for coach Jay Johnson to work with his overflowing roster that includes 14 newcomers as well as an unprecedented number of seniors.

“For the first time it feels a little bit like normal,” Johnson said Thursday via Zoom. “We’re very grateful for that, and certainly not taking it for granted. Last Friday night I just kind of took a deep breath and said ‘man, this is so great to be back here with the lights on, even with a 3-inning scrimmage happening.’”

Fall ball is normally a time to focus on fundamentals, and this time around that’s even more so. Though many of Arizona’s players competed in summer leagues, that doesn’t make up for all the games they missed out on between March and June.

“It’s not lost on us as a coaching staff that even our returning players lost three to four months of game opportunity to test their skill,” he said. “We’ve kind of gone back to Day 1 type fundamentals in each area of the game. We have a very deliberate progression offensively, baserunning, bunting, defensive individual skills and team defense. We’re working through that right now. Same way that we have in the past.”

The most noticeable differences: masks on all players, who are spread out much more than normal during drills. It helps the UA has a full Spring Training complex to work with in and around Hi Corbett Field, especially since it will have the largest roster in recent history.

In addition to the NCAA granting an extra year of eligibility to all spring student-athletes it also lifted the cap on roster size for 2021. Johnson said he doesn’t have to declare his final roster until the team’s first game next year, but suffice it to say it will be large.

Arizona only lost seven players from its 2020 roster. Catcher Austin Wells and utilityman Matthew Dyer got taken in the COVID-shortened five-round MLB Draft, while senior pitchers Nate Brown and Davis Vainer opted not to take advantage of the extra year of eligibility. Also no longer with the program are infielder Dayton Dooney, outfielder Tate Soderstrom and 1B/OF Blake Klassen.

The 2021 roster will include at least 10 players in their fourth or fifth year of college baseball, most notably right-handed pitcher Vince Vannelle, lefty arms Gil Luna and Garrett Irvin (who went 4-0 as a starter during the brief 2020 campaign) and outfielder Dont’a Williams.

“It’s a big deal; we haven’t had a ton of seniors the last few years on our rosters,” Johnson said. “As a coach that appreciates experience, appreciates leadership, it’s very valuable. We’re actually working with them continually on how to be a good leader. It’s really a skill you’ve got to learn.”

Arizona’s newcomers include 10 freshmen who helped make up a 2020 recruiting class that’s ranked fourth in the nation by Baseball America—“I think that the talent in this particular group exceeds any that we’ve had at any one time—as well as four transfers, most notably flamethrowing righty Austin Smith, who previously pitched at Division III Southwestern (Texas) University.

“It’s a very unique roster where we have guys with a lot of extremes,” Johnson said.

Arizona’s 2021 schedule has yet to be released, but Johnson said he’s been told to prepare as if it will start in early February like normal.