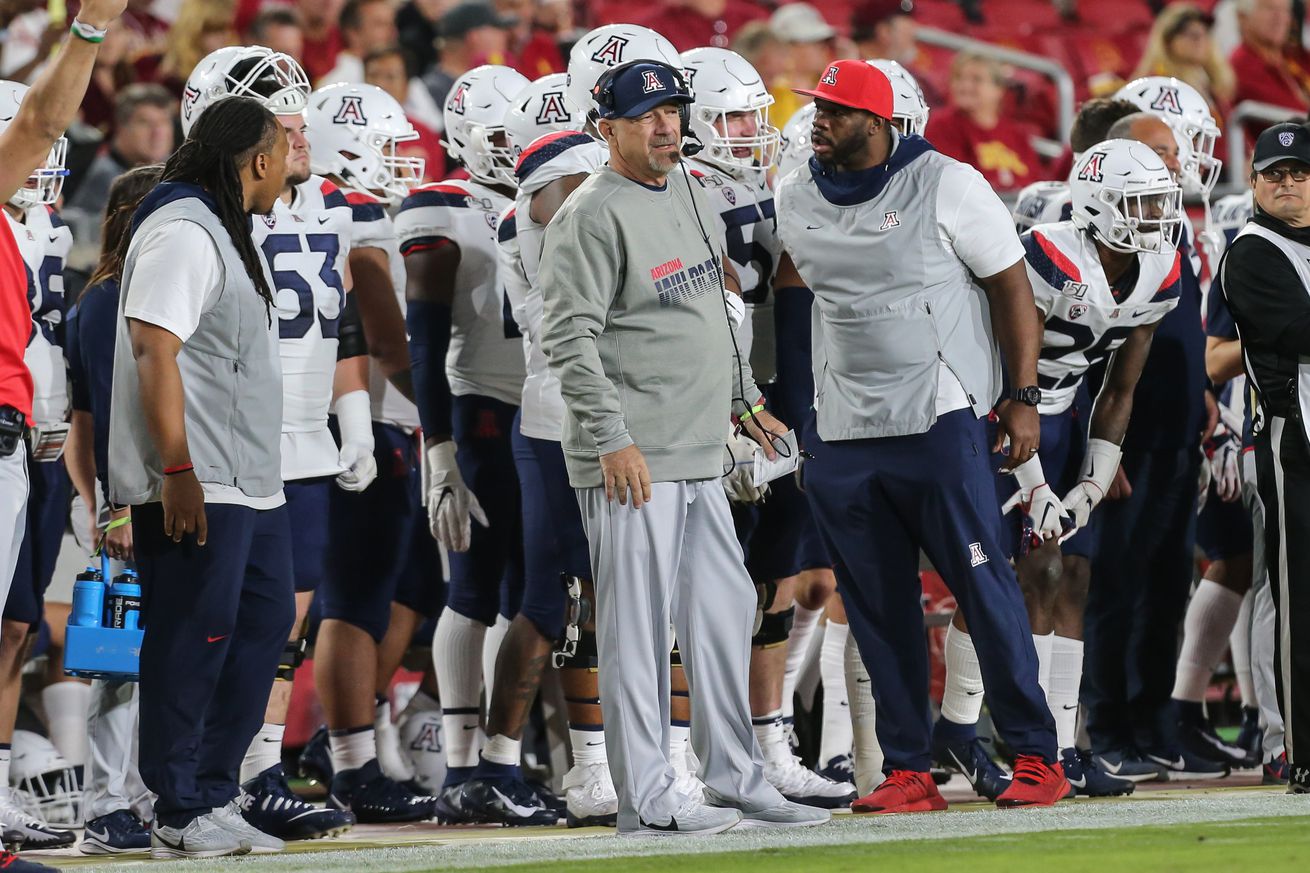 Had the Arizona Wildcats gone any longer without being able to practice, Noel Mazzone would have needed to figure out a new way to take up all his free time since the main option had been exhausted.

“The best thing about them letting us finally get out and practice is, I basically had no more Netflix shows to binge watch,” the UA offensive coordinator said Saturday via Zoom, after the UA’s second preseason practice. “So I was in trouble.”

Mazzone—who highly recommends Ozark and Money Heist, though warned the latter includes subtitles “so you might have to read a lot”—enters his third season at Arizona feeling really good about the pieces he has on offense.

Arizona returns a promising young quarterback in sophomore Grant Gunnell, a deep and experienced offensive line and a stable of skill weapons.

“Mentally, we’re so much further ahead now than we’ve ever been,” Mazzone said, citing the countless hours he’s spent with his players on Zoom. “That’s kind of like a way of life for us now. That mentally has really put us ahead of the curve. Now they can go out and be comfortable with the verbiage and all the things mentally you need to know in this game, and now I think they can go out and just play.”

Here are some takeaways from Mazzone’s time with reporters:

Spring evaluations in the fall

Mazzone said all of the online time has made it so the early part of the preseason doesn’t need to be bogged down by players learning where to line up or what to do. Instead, it gets to be used evaluating players’ skills and abilities, something that spring ball is normally used for.

“The downside of all this for all of us is that spring ball is usually your evaluation time, you can usually make some decisions on some players,” he said. “Where do we fit them into the offense, what can we do with this guy and what are their strengths. We didn’t have, so right now for about a week or so we’re kind of going through that process.”

For instance, Mazzone said he’d ideally like to have entered fall camp with a good idea of how his quarterbacks lined up behind Grant Gunnell.

“I wanted to come out of spring ball with those guys competing, so Coach Sumlin and I could really evaluate the quarterback position,” he said. “Besides Rhett (Rodriguez), who’s the old man of the group … I’ve got three young guys that really have no experience. So missing the spring ball probably, on the field stuff, hurt those guys worst, but mentally I think they’re ahead of the game right now. So it’s just a matter of them taking that information to the field and being able to do that on the field. Coach and I want to go here for about a week or so and give these guys a chance to show where they are in their growth and then kind of make some decisions on the position behind Grant.”

Sorting out the receivers

Nowhere did the loss of spring practices impact Arizona’s offensive hierarchy more than at wide receiver, where nine returning players started at least one game in 2019. Including running backs, the Wildcats bring back nearly 71 percent of their receiving production from a year ago.

Brian Casteel was Arizona’s top pass catcher, with 45, while Jamarye Joiner led the team in receiving yards (552) and touchdowns (five). Five returning receivers had at least 14 catches and six produced more than 100 yards.

“Any good football team has competition,” Mazzone said. “You’ve got guys that are pushing each other, it’s not like okay we’ve got three receivers and the rest of the guys can’t play. That’s not a good situation. I think we’re in a great situation now because we’ve developed some depth, guys are pushing each other. It’s like life, performance-based, so they understand that when they go out there they need to perform or they can lose their job. It’s a really good, healthy competition.

“I cannot question at all their want-to and their hard work right now, because they’ve come out and had two great days.”

A dual role for Joiner?

Speaking of Joiner, Mazzone didn’t seem to have any concerns about the redshirt sophomore’s health after undergoing foot surgery in May. In fact, he’s expecting even more from the converted quarterback in his second year at the position, possibly even making use of that other skill set.

“I see a really good athlete that kind of got thrust into an important position last year as a redshirt freshman, but very athletic,” Mazzone said. “I see that same guy coming back a lot more mature, a lot more feeling comfortable lining up at the receiver spot. And who knows, he may still line up at some quarterback spot, too, we don’t know, right? He’s just such a versatile kid that he brings so much to our offense at different positions, and on top of that he’s one of our top playmakers.”

The relationship between a play caller and his quarterback is essential to a successful offense, and it goes without saying the one between Mazzone and Gunnell is strong. The former began recruiting the latter when he was with Kevin Sumlin at Texas A&M, and that bond was strong enough for the latter to leave his home state for Arizona.

All the (virtual) face-to-face time they got in during the extended offseason has only furthered their connection.

“We got a chance to really our develop our relationship,” Mazzone said. “Then when they allowed us to go on the field and actually have our eight hours of field and work on football-specific stuff we had a ton of time being able to just spend on the field, working on things you never have time to work on in a real camp and in the season. The closer that he and I become, knowing each other and knowing what his strengths and weaknesses are, and for him knowing my strengths and weaknesses, I think it’s a better situation.”

Mazzone said most of the work has been focused on Gunnell’s pocket presence, specifically in creating passing lanes and sliding in the pocket.

“He’s such a big, tall, long guy, we’re still working on his quickness in the pocket,” Mazzone said. “I think he’s throwing it as well as I’ve seen him throw it since he’s been here.”