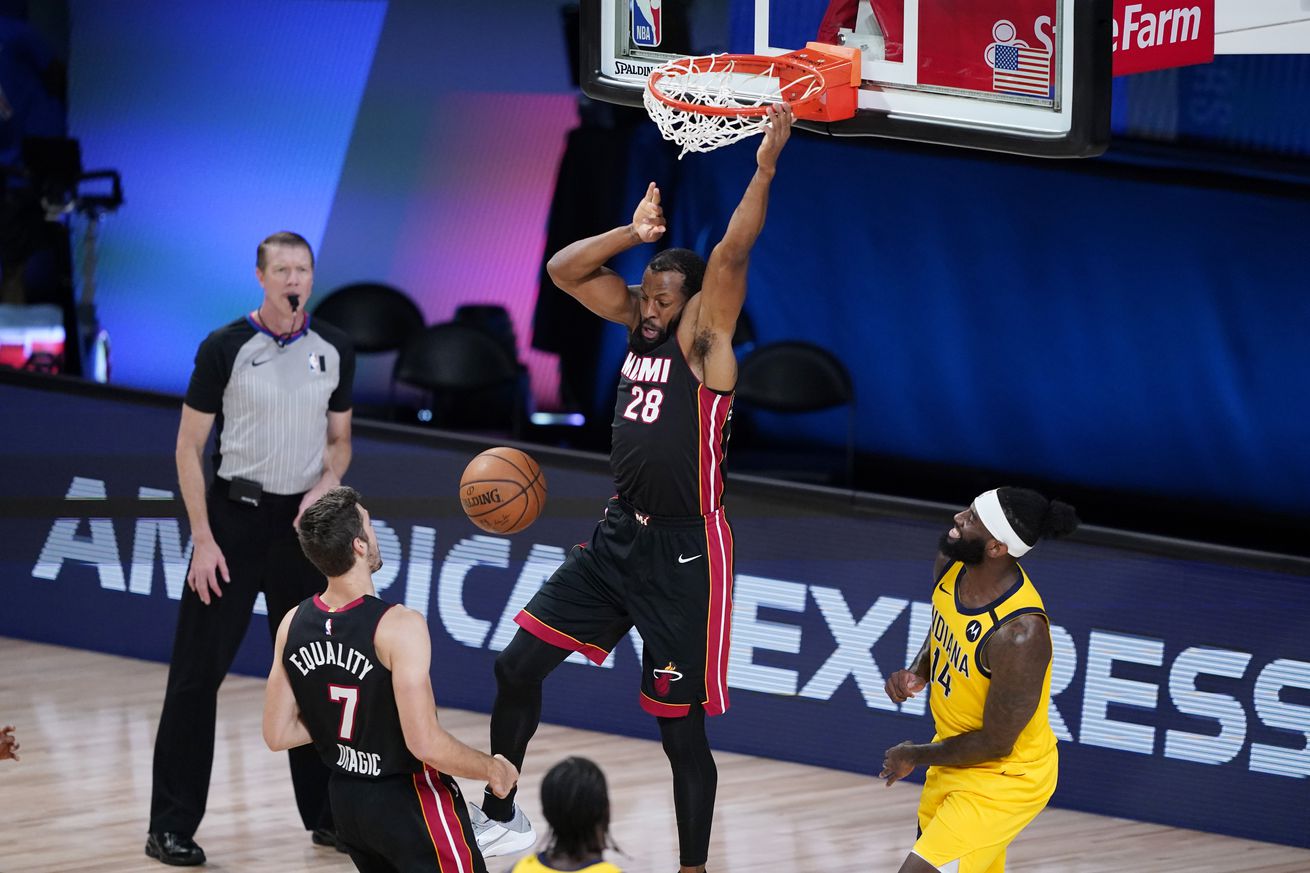 Six former Arizona Wildcats have made the 2020 NBA Playoffs, and three of them are part of the first-round series between the Indiana Pacers and Miami Heat that began Tuesday. With one on each team, this series guarantees that at least one ex-UA star will make it to the Eastern Conference semifinals.

The early edge goes to Solomon Hill and Andre Iguodala, whose Heat pulled away in the fourth quarter to beat the Pacers and T.J. McConnell 113-101.

Iguodala, a former NBA Finals MVP appearing in his 146th career playoff game, had 4 points—all on dunks—and a rebound in 25 minutes off the bench in his postseason debut with the Heat. Hill, who was traded from the Memphis Grizzlies in February along with Iguodala, did not play.

The Heat, who outscored Indiana 32-21 in the fourth quarter, were led by Jimmy Butler and Goran Dragic, who had 28 and 24 points, respectively.

McConnell, playing his first playoff game with the Pacers after 19 the previous two seasons with the Philadelphia 76ers, had 5 points, 3 rebounds and 3 assists in 13 minutes. He was part of an Indiana bench that scored 35 points, helping partially offset the loss of Victor Oladipo, who suffered an eye injury early and did not return.

Malcolm Brogdon and T.J. Warren had 22 apiece for Indiana.

Game 2 of the best-of-seven series is set for Thursday at 10 a.m. MST, with ESPN set to air the contest.

Also Thursday (3 p.m. MST, ESPN) is Game 2 of the Orlando Magic/Milwaukee Bucks series, with eighth-seeded Orlando holding a 1-0 lead after shocking the top-seeded Bucks 122-110 on Tuesday. Aaron Gordon missed that game with a strained hamstring and his status for Thursday is uncertain.

And Wednesday (10:30 a.m. MST, NBATV) will see Rondae Hollis-Jefferson, Stanley Johnson and the defending NBA champion Toronto Raptors look to go up 2-0 on the Brooklyn Nets.

Reminder: all NBA playoff games will take place in the bubble in Orlando.

People will point to Dragic and Butler’s big shots, but y’all notice who was on the floor during that important stretch? The stabilizer, Andre Iguodala.

Iguodala always Plays what the Team needs Most

I feel like TJ McConnell is the modern day Steve Kerr. Can see him being a head coach when he retires lol

TJ McConnell is the greatest energy guy in the league

I hereby give TJ McConnell a lifetime contract. This contract trumps legal paperwork the Pacers might sign him to. He’s now locked up for life

In part because those units were 4-of-8 from three, the Heat scored 130.4 per 100 possessions in the 11 minutes that Bam Adebayo, Jimmy Butler and Andre Iguodala were on the floor tonight (+8 overall).

OffRating for that group in 45 reg season minutes was 83.6.

The Pacers getting real minutes and production from JaKarr Sampson, TJ McConnell, Edmond Sumner, and Justin Holiday is awesome. Three undrafted guys, and Sumner went 52nd. Says so much about how Nate McMillan does such a great job putting guys into roles to succeed.

Per @TEastNBA, every fan base around the league hates TJ McConnell. At least that’s some small consolation

Seeing @TJMcConnell out there scoring and hustling for a team not named Sixers pic.twitter.com/ugTM7jL12R

Nate McMillan sir, you are guilty of dereliction of duty for failure to have tj mcconnell on the court right now… gotta put your scrappy gamers on the court, sir