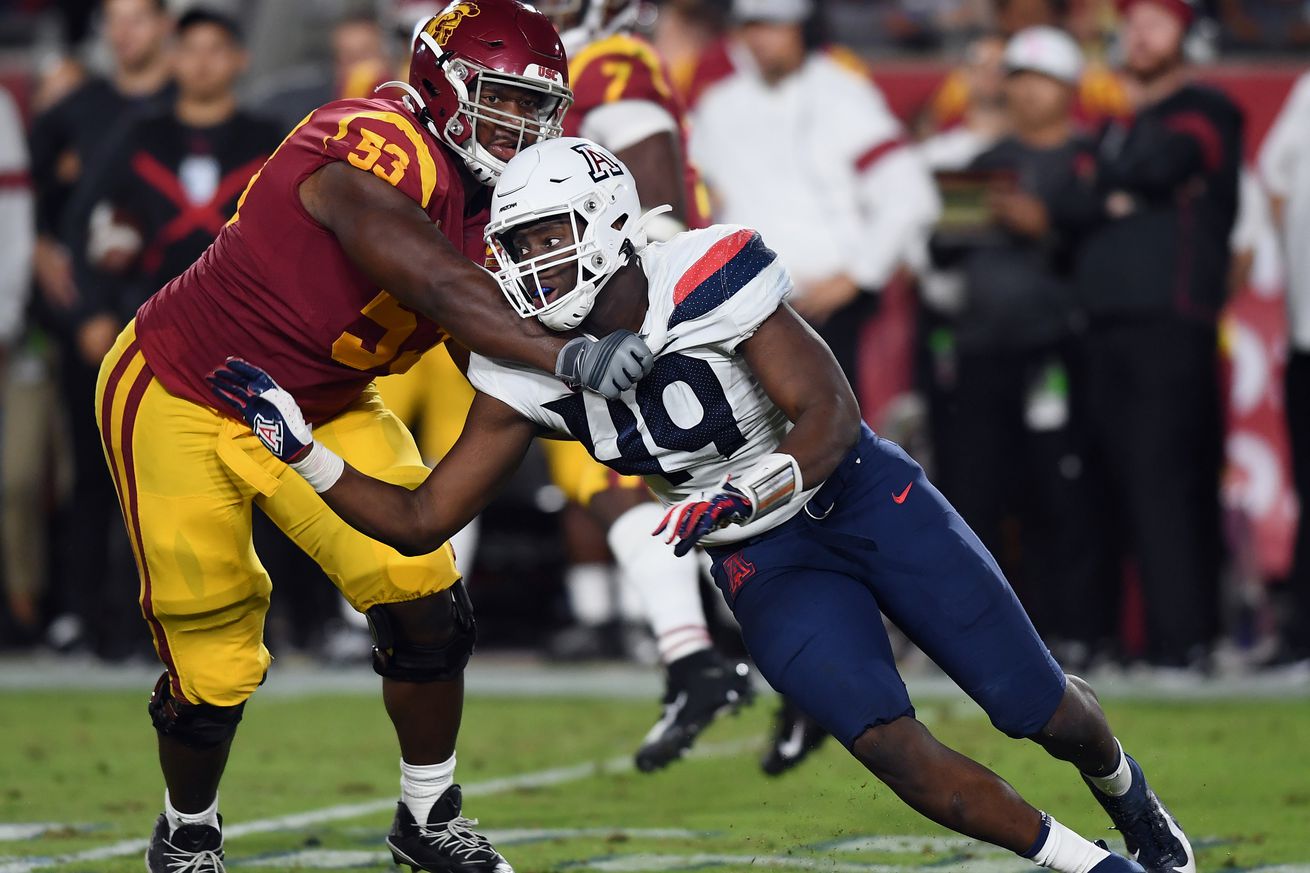 There are a lot of things about the upcoming football season that Jalen Harris is looking forward to, but it’s pretty clear which game on the Arizona Wildcats’ schedule stands out to him.

That would be the Dec. 5 visit from Colorado, when the redshirt junior linebacker would have the opportunity to face off against little brother Jason Harris, a freshman LB for the Buffaloes.

The older Harris figures to be a must-see player this season as he takes on a much bigger role with Arizona’s defense, both literally and figuratively. He’s back at outside linebacker after spending last season at defensive end, and the 6-foot-4 defender will be doing so at 260 pounds, up 55 from when he arrived at the UA in 2017.

“It was something that I really didn’t know if I’d be able to play at, but it’s working,” Harris said. “I’m enjoying that. I ran a lot, tried to gain more weight, make sure it’s not bad weight.”

Harris started eight games at defensive end last year, playing in all 12 contests, and lead the Wildcats with four sacks to go along with 6.5 tackles for loss. The addition of six defensive linemen this offseason, including two graduate transfers, as well as the departure of multi-year starting linebackers Tony Fields II and Colin Schooler necessitated the move back a level.

In doing so, Harris will be doing more pass coverage than at any point in his playing career.

“Last year I was playing more hand in the ground, but this year they got me playing hand in the ground, but also off the ball a little bit so I’m able to drop coverage and rush the passer and keep the offense on their toes because they don’t know if I’m coming or dropping,” Harris said. “Last year I did it a little bit, not much. It’s kind of a new thing, something I’m still learning.”

Aiding Harris in his transition to this new role is the presence of a dedicated position coach, Andy Buh, who is working specifically with outside linebackers. Harris said Buh’s experience—he’s been coaching at the college level since 1997—should pay dividends.

“Any question we have, he answers it,” Harris said, noting Buh is big of his OLBs playing physical. “You’ve got to attack people, you can’t play soft. If you play soft, you’re not going to be on the field.”

Harris hopeful parents will get to watch him play

When the Pac-12 announced last month it was bringing back football, it also said those games would not include fans in the stands. But a push to at least allow players’ family members to attend games is underway.

A Change.org petition, started by the mother of a USC player, had already surpassed its initial goal of 2,500 signatures by Tuesday night. It is requesting that “a plan is developed before the start of the 2020 season that allows families of the players to watch games live in the stadium where they will be played.”

Having family in attendance would be a big morale boost for players, who like Harris are still wrapping their heads around the concept of playing inside an empty stadium.

“It’s going to be different for sure, but it’s something we have to get used to,” Harris said.

If the Pac-12 were to approve such a plan it would mean Harris’ parents—including his father, Sean Harris, who was part of Dick Tomey’s Desert Swarm defenses—would get to watch their two sons clash when Colorado visits Arizona Stadium in December.

Jason Harris was one of Arizona’s top recruiting targets in the 2020 class. Jalen said he tried to get him to join him in Tucson but that his brother “had to do what’s best for him and I encouraged him to do that.

“He thought Colorado was the best place for him to be so he’s there right now working,” Harris said. “I talk to him every day.”