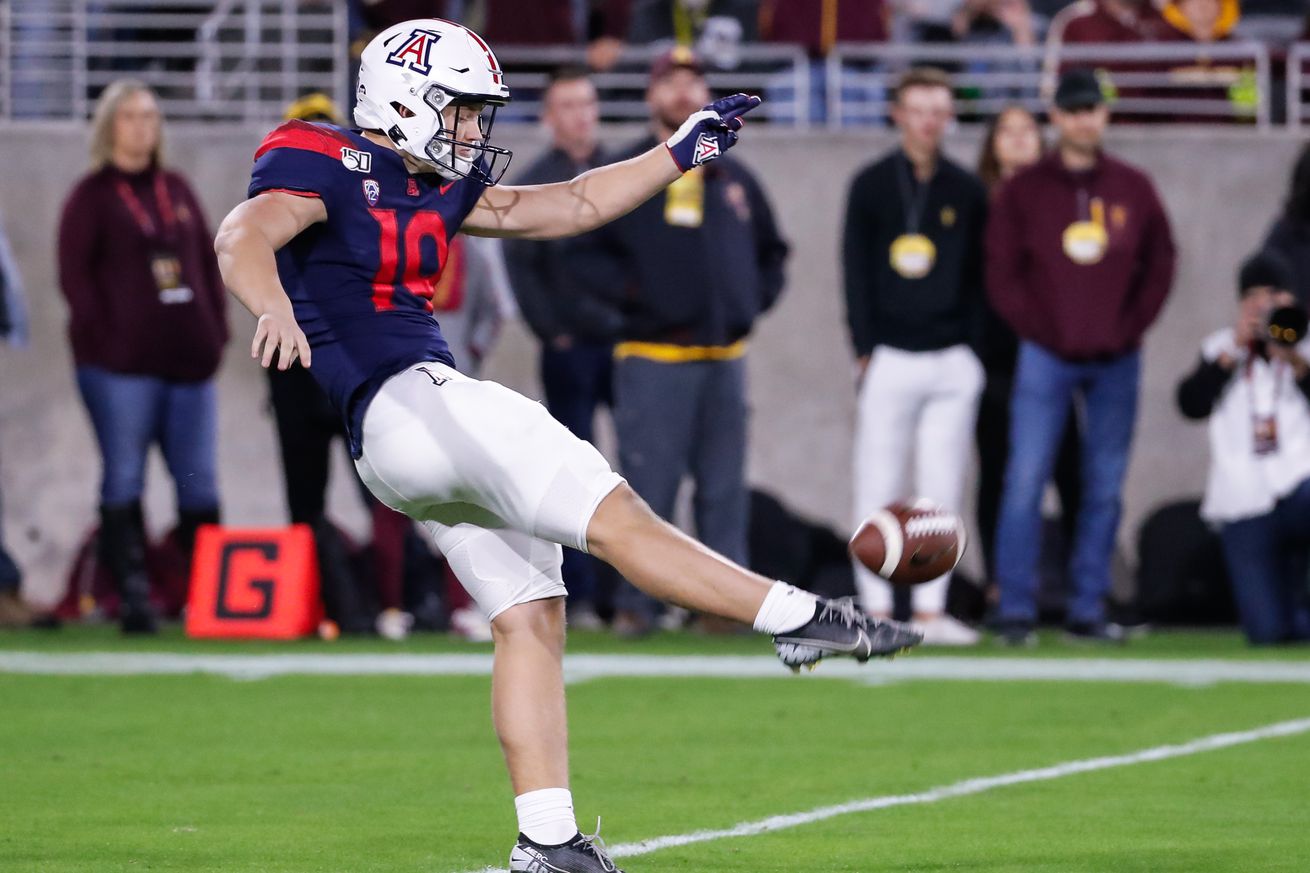 Not only were the Arizona Wildcats the worst defensive team in the Pac-12 last season, they were also the worst on special teams.

How bad did things get?

They were 10th in the conference in field-goal percentage (58.8%) and dead last in punting average (38.8 yards per punt). Those kicking woes, which have hindered the Wildcats for two years now, put even more stress on an offense and defense that already had enough problems as it is.

“Obviously last season we were very disappointed in how we finished the season,” said special teams coach Jeremy Springer. “The guys gave great effort. We didn’t perform as well as we needed to be to win games, and this offseason we really take ownership of that as a core group as myself first, then putting that pressure on our punters to really work hard this offseason. They’ve done a great job so far. We still got some time to go, and guys are on it and they want to be successful and that’s all you really ask. Those guys are all in. They’re all into Arizona. They’re all in for fans. They’re all in for players. They want to be the reason why we’re flipping field position and putting us in great position to win games.”

Arizona is hoping sophomore punter Kyle Ostendorp can improve in his second season after averaging just 39.7 yards per kick as a freshman, numbers that paled in comparison to his days at Phoenix’s Desert Vista High School.

If not, the Wildcats may turn to walk-on and Tucson native Jacob Meeker-Hackett. The redshirt senior punted for Pima Community College in 2016, averaging 37.4 yards on 13 kicks, including four inside the 20-yard line.

“I tried to get him to walk on last year and he paid his dues,” Springer said. “He tried for a couple semesters, we finally were able to get him on, and he played scout receiver last year because we just needed bodies over there. I told him, ‘Hey, you’re gonna get a chance your senior year to compete with Kyle’ and so far he’s taking ownership of that. He’s another guy that really worked hard in the offseason. It means a lot to him, a hometown guy.”

At kicker, the Wildcats will continue to roll with senior Lucas Havrisik, though they did add Tyler Loop, one of the top kickers in the 2020 class.

Springer wants more consistency from Havrisik. He has one the strongest legs in the country—the reason he’s terrific on kickoffs—but has converted less than 60 percent of his field-goal attempts over the past two seasons.

Last season, Havrisik weirdly made a higher percentage of his kicks from 40-49 yards and 50+ yards than he did from 30-39.

“I love where his mentality is at,” Springer said. “He’s a guy that wants it, wants to be the best, thinks about it, works like it, and that’s what you can ask for as well from that guy. I mean, that core group of our specialists right now have really taking ownership on their own to be the best they can be. When you have that right there, I truly enjoy coaching them.”

This will be Springer’s third season coaching Havrisik and he sees a real benefit to be able to work with him for that long.

“[Our relationship] was good from the jump, but I think we’ve really vibed well over the last couple years because now we’re trying to understand his body and how it works,” Springer said. “For kickers it’s a different sport than playing linebacker or playing receiver. So, when does he need time where he can rest his leg, feel confident the next day? Is that three times a week, four times a week, five times a week? I put my ownership on him to tell me that because he knows his body better than I do. And just feeling that vibe from him and really connecting there is what we’re trying to work for so when we get in the game we trust each other and we know that he can come out and make that big-time kick to help us win that game.”

Arizona was also near the bottom of the Pac-12 in the return game, but Springer isn’t so concerned about that position.

“I feel really good about our depth from a kickoff return perspective because we got guys back there that are just natural returners that want to be back there as well,” Springer said. “It’s trying to find that number two guy. Who’s gonna be the guy out there that wants the ball in his hands and is fearless? That’s what you’re looking out of punt return. That’s a tough position.”

And if neglected can lead to some game-changing mistakes. Springer has shown his players clips of gaffes that have been made across the country this season, even in the NFL, such as the Atlanta Falcons seeming to forgot how onside kicks work in their collapse against the Dallas Cowboys.

Those kinds of errors are even more likely to happen this year since there was no spring football and fall camp is shorter than usual due to the coronavirus pandemic.

“We’re trying to make an ownership in this fall camp right now, that we’re going through to really work the situational stuff that’s been happening in college football to make sure we install these, to go live—live field goals, live punts—to get our specialists going against that type of pressure,” Springer said. “Because they got to feel it now versus the first time in games because we’re not doing anything contact-wise.”

At the same time, Springer won’t hesitate to play freshmen. In fact, he’s emphasizing it.

With the NCAA giving football players an extra year of eligibility no matter how games they play this year, special teams is an opportunity to get some young players some valuable game experience.

“Get them rolling now, don’t wait till Week 3, Week 4,” Springer said. “Because in a seven-game season, we can’t do that. And they’re young guys and they’re not gonna lose eligibility. So get them on now, introduce them to college football now and get them ready for next year as well. And then we have guys like Thomas Reid, leaders like that, that really stress the importance of it. That definitely helps.”

“They pick up things very easily and I know they’re going to factor into helping us this year,” he said.