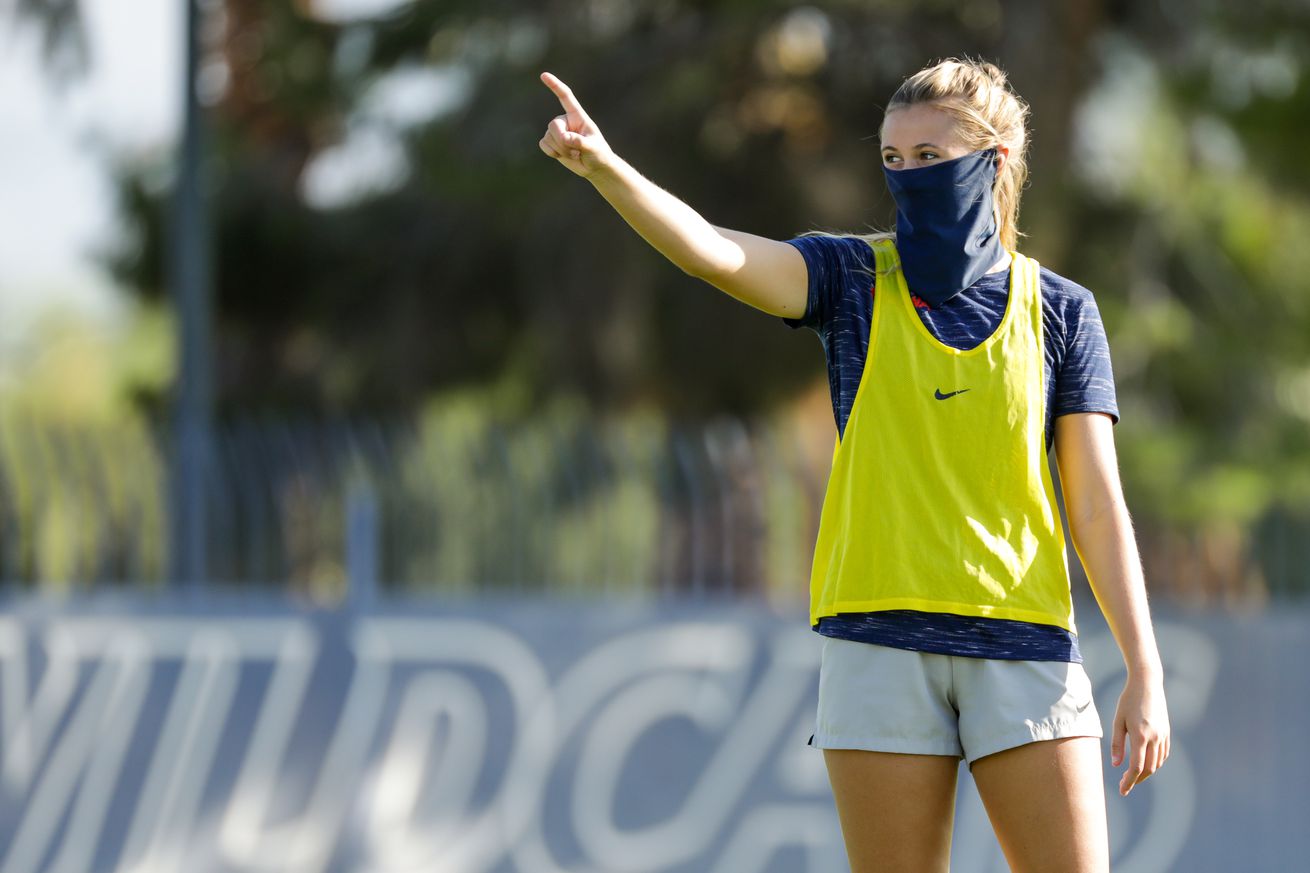 Arizona soccer will host its first fall scrimmage on Friday and Iliana Hocking is well aware of the risks that come with playing sports during the coronavirus pandemic.

She experienced them first hand.

The junior midfielder contracted COVID-19 in mid-September, forcing her to quarantine alone for nearly a month. Her symptoms were serious.

“I felt so ill,” she said Thursday. “I remember I was feeling fine. It was like a week in and I was like, ‘cool, I don’t think I got it’ and I woke up on a Sunday morning and I had the worst body aches and chills and then I had a really bad sore throat and my congestion was super bad. With my nose, I already had really bad breathing problems, but then it was just so hard. It would give me headaches. I think that was the worst part for me.”

Hocking suspects she caught the virus from her boyfriend, who got it from a friend despite their best efforts to avoid other people.

“Right after, I was having a lot of shortness of breath problems, but now I feel fine,” Hocking said. “But also I had surgery on my nose (on October 5) to help my breathing. So I feel like that too has helped me right now. So it could be totally different for other people.”

Hocking returned to team activities last week as the Wildcats entered their second week of full contact practices. At first she felt “so out of shape” but her conditioning is improving.

“You’re always really sore after the first one, but I have so many bruises right now,” she said. “But now I can definitely see an improvement fitness-wise. It just feels good to be able to do stuff now. I feel like I’ve been limited for like 10 months.”

Hocking, a key returner, is already battling a hip flexor injury that she will have to manage the rest of her career.

“It’s just super inconsistent, like some weeks are better than others,” she said. “Last week it didn’t hurt at all and we had double days all three days. This week it was flaring up and I have to limit my reps and everything. So I just have to monitor it the next two years. There’s nothing I can do about it anymore. Like there’s surgeries, but I’d have to reshape my hip and I probably wouldn’t play soccer if I ever did that.”

If there’s any good news it’s that Hocking is immune to the coronavirus for at least a few months. That means she doesn’t have to get COVID tested three times a week like her teammates. Instead, she gets her blood drawn once a month to ensure she still has antibodies. (She does.)

“So I just chill at home while my roommates go,” she laughed.

Hocking still follows the team’s COVID protocols as much as she can, but said her immunity feels like a weight has been lifted off her shoulders.

She understands the concerns about having a soccer season during a pandemic, but she’s excited to take the field Friday and for the season in February.

“I think it’d be totally different if we didn’t have testing and we weren’t following protocol,” she said. “But I think we’re going about it in the right way, so I think it’s totally doable.”

Friday will also be the first time freshmen like Kayden Heinrich get to showcase their skills in a game-like setting at Arizona.

She can’t say it’s something she’s been waiting for for a long time.

The speedy forward was originally going to attend UC Davis, but changed course when the Aggies made a coaching change after the 2019 season.

Many girls commit to colleges in their freshman and sophomore years of high school, but Heinrich wasn’t even recruited by Arizona until November of her senior year.

She said she caught the coaching staff’s eye in a showcase and “the rest is history.” Her addition was made official on May 30, more than six months after National Signing Day.

“I thought that the program was an elite program and one of the best in the country,” Heinrich said. “I was really impressed with everything that the coaches had to offer, as well as the team and the facilities. And I thought that the campus was beautiful. It’s pretty compact and small, but it has tremendous architecture.”

Growing up in Huntington Beach, California, Heinrich has aspired to play Pac-12 soccer ever since she was little. Getting to this level has been “gratifying” but also an eye-opener so far.

“I’ve noticed that everybody is fast here,” she said. “Like, in high school sometimes you could get away with being faster than everybody. But here everybody is talented, everybody has their own special techniques. And so it’s a matter of being finding out what I’m the best at and then working into my strengths.”

“I think that I’m fast and I pressure the ball really well,” she said. “And I’m able to use both my feet to my advantage to score and cross balls.”

COVID protocols have prevented the returners from getting to know the freshmen as much as they’d like, but Hocking admires Heinrich’s personality and coachability so far.

“Kayden has such a good attitude,” she said. “She’s so bubbly, super nice, kind, sweet. Like a really good person. And on the field, I feel like she’s a really hard worker and super absorbent and I feel like she’s like an easy person to coach in a sense that she just listens. And I feel like she’ll just adjust. Obviously none of us know everything about soccer so Tony (Amato)’s going to critique all of us. And if he tells her something, she’ll do it right away, which is a super good quality to have. That’s how you’re gonna get better.”

While Heinrich is happy to be at the UA, her first semester isn’t what she expected.

Due to the pandemic, all of her classes are online—”I think I’d prefer being in the classroom because I’m more of a hands-on learner,” she said—and she and her teammates have to be extremely cautious in public. Most of the time they just shuffle between soccer practice and their residences.

“The biggest challenge has been just the fact that it’s been hard to get to meet other people and other athletes,” Heinrich said. “Because part of our protocol is when we’re socializing with people, to be outside and be six feet apart with masks.”

That’s even more difficult for freshmen like Heinrich who live among other students in the on-campus residence halls. Hocking applauds them because “I would have moved out of the dorms by now.”

“Living in the dorms is a bit stressful at times, but luckily I share a bathroom with my podmates who are also soccer players, so we’re able to stay a little bit more contained and away from regular students,” Heinrich said.

Friday’s scrimmage will make all those precautions worth it.

“I’m most looking forward to getting to play with my teammates,” Heinrich said. “We’ve been working really hard this whole semester, working towards playing this game, and we’ve gotten to practice with one another. And now I’m excited to get to play with them.”