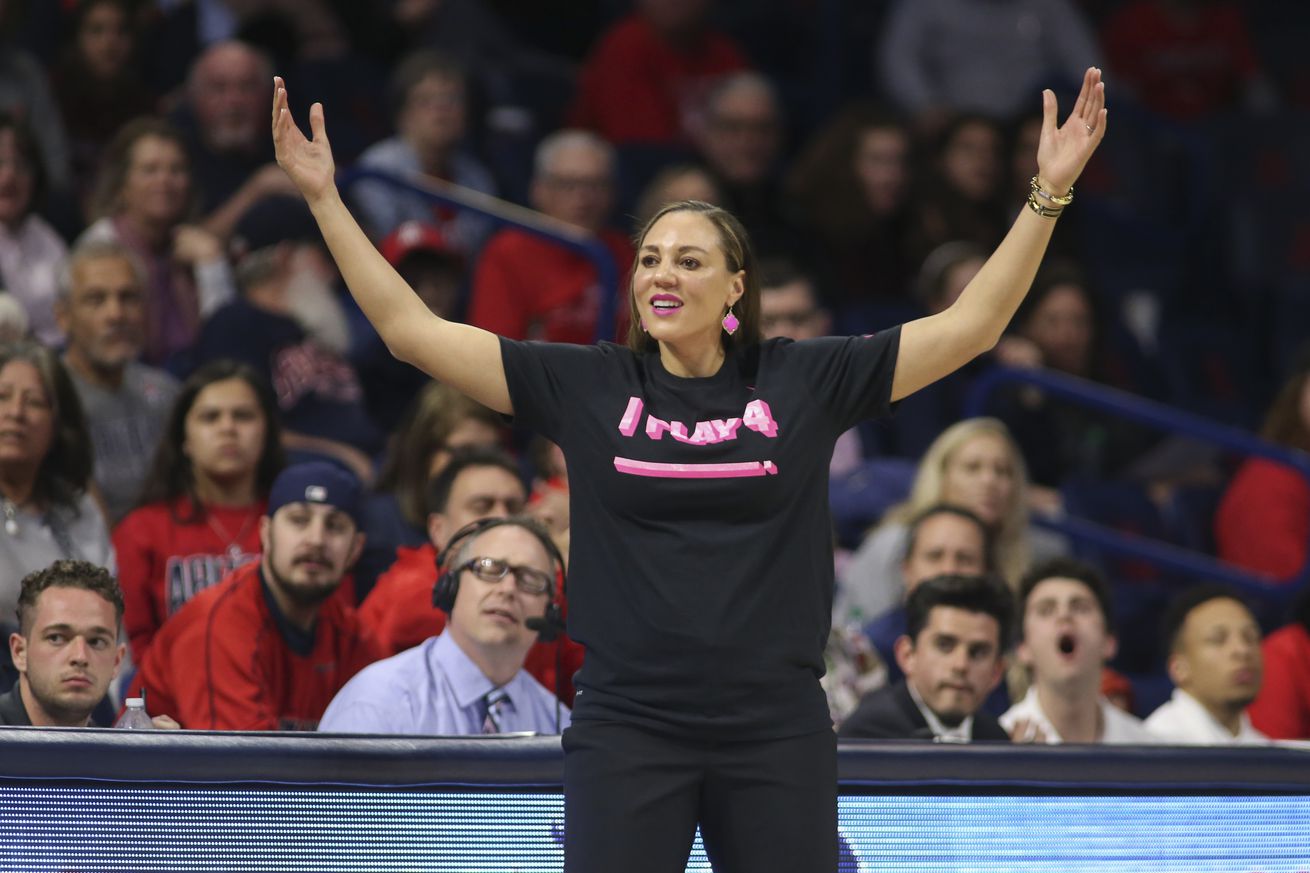 It’s been a tumultuous summer, but some measure of clarity finally exists for Adia Barnes and Arizona women’s basketball. Barnes was finally able to meet with the media after months of dealing with questions of reentry, remote recruiting, and her pregnancy.

As is typical of the Wildcats’ head coach, she was optimistic about the future despite the current challenges.

As with many of her press conferences, it was a discussion as much as an interview. Barnes ended things by asking the media if we thought the season would happen. Fingers crossed that it does and that it’s as close to normal as possible.

As to how Arizona hopes to get there, Barnes had a lot of thoughts. In fact, she had so many thoughts, that it took a two-part notebook to cover them all. Let’s jump into part one.

Did the Pac-12 make the right decision by postponing the basketball season so far in advance?

Barnes is confident that the league made the best choice for the safety of the student-athletes. As many coaches did, she took to Twitter immediately after the decision to voice her support.

While she has concerns about the fact that everyone is not operating under the same rules, especially around training, Barnes is taking comfort in the knowledge that if Arizona and the Pac-12 stay the course, their players will get through this safely.

Referring to former Arizona coach Joan Bonvicini, who went through the ordeal of Shawntinice Polk’s death, Barnes said: “I guess you have to look at the health itself and say what’s the priority?…You know, like Joan has mentioned…I don’t want to be that coach that has to call a parent and tell them their kid passed away from COVID or their kid’s in the hospital.”

As to that issue of uneven training, both the Pac-12 decision and the regulations of local authorities make it difficult for teams in the conference to be on a level playing field with many programs in the South and Midwest.

Many Pac-12 schools jumped at that. Initially, Arizona was one of them, starting a phased reentry plan with returning football players back in June. That was halted fairly quickly, although the University has had just three positive tests among its returning athletes. At the time, rising numbers of cases and hospitalizations in the state of Arizona were a concern for the administration.

While some teams never advanced beyond voluntary workouts and some never even got to that stage, others took the next step and returned to the court after July 20 when the NCAA allowed teams to start on-court activities.

This playing field isn’t uniform even within the state of Arizona. Despite being in the county that is driving Arizona infections, Arizona State has been on the court for several weeks. Arizona, which is located in a county that the state has said is “very close” to taking the next step in reopening, has not even had players in town.

If the calendar is not changed and made uniform across the country, Barnes said that there’s a potential that the SEC could have months of practice that those in the Pac-12 don’t get.

“If we are all competing for a national championship, they have an advantage,” she said.

Arizona finally started its reentry process for basketball this month, and the players have been trickling in. As of Aug. 14, Barnes said 11 players had returned to Tucson, including all of those from the United States. Mara Mote was due to arrive later that night, followed by Helena Pueyo, Marta Garcia and Tara Manumaleuga to complete the team.

“It’s just unprecedented times,” Barnes said. “I did not think in what are we August 15th? I didn’t think we’d be in the same situation as we were in March. But you know, I’m just a little bit more optimistic at this point, because now at least we have a date and now our players are coming back. So I’m super excited to see the players’ faces.”

Barnes said that they have been able to go to the Cole and Jeannie Davis Sports Center to get some movement in, but there’s still a ways to go before things are settled.

“You know, still we don’t have a lot of answers,” she said. “But at least we got our players back, we’re going to be able to start lifting, be on the court soon in a couple months. So I think it’s just, it’s good for the players to be here and have some kind of normalcy.”

The challenge of an international team

After the University shut down last March, all of Arizona’s players eventually went home. That included the five international players from last year’s team. They scattered to their homes in Canada, Spain, Latvia, Turkey and Australia.

Those players, along with the two incoming freshmen from overseas, are now facing the task of returning to the U.S.

For a considerable period of time, it wasn’t possible to fly directly to the U.S. from many places around the world, including most of Europe. While that’s no longer the case, that doesn’t mean there aren’t challenges.

“The crazy thing is they’re coming to a worse place,” Barnes said. “In all their countries, it’s a lot better and then they come here it’s like we still haven’t resolved our problem. But like Spain, It’s escalated a little bit, but where Helena’s at and Marta in Sevilla, there’s not a lot of cases. So their parents were kind of like, ‘okay, is it safe’ and stuff like that. But we’re doing all the right things here.”

In addition to the unease that families might feel about sending their children to a place that is still struggling with the pandemic, the logistics of travel present their own difficulties.

“For a couple of them for like a month-and-a-half, they couldn’t even get flights,” Barnes said. “And Tara, because overseas, like in Australia, you get 600 cases, it’s like the country kind of shuts down. We have like 1,000 a day and we’re just kinda flowing with no masks. She might have to fly through New Zealand. So it’s just there’s limited flights. The flights are extremely expensive. It’s just been a little bit of process, but now finally people have tickets and are coming.”

Now, the question is whether the country can get things under control and have a basketball season—even if it has to wait until 2021.