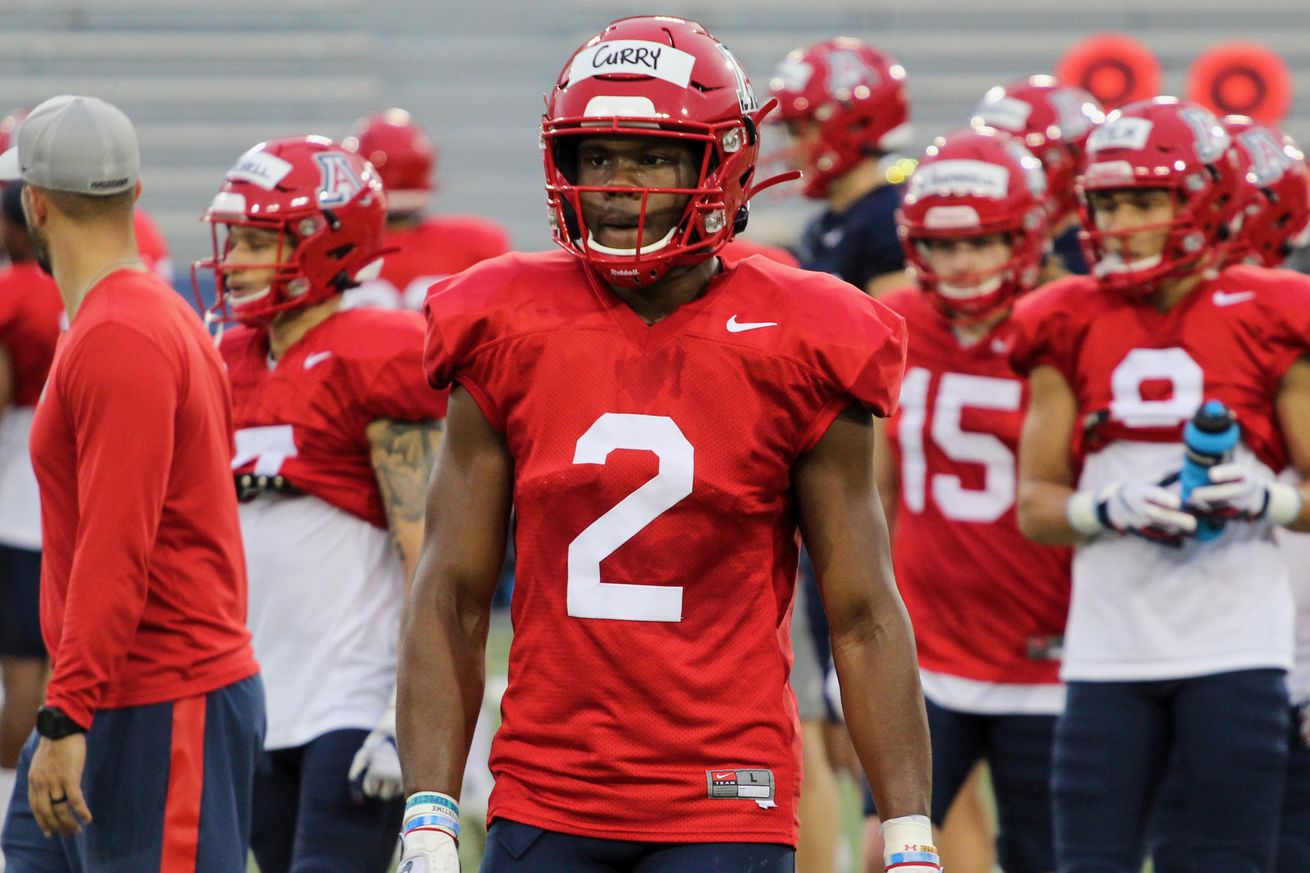 The Arizona Wildcats by all accounts have their star quarterback in Grant Gunnell. Now it’s a matter of figuring out who he’ll be throwing to.

It’s an open competition right now with 13 scholarship receivers going at it in fall camp, but sophomore Boobie Curry is an obvious breakout candidate.

Before joining the Wildcats in the spring of 2019, Curry and Gunnell made history at St. Pius X High School in Houston. Gunnell capped his career by becoming the Texas high school leader in career passing yards and passing touchdowns, with Curry serving as his go-to target.

“One of our other receivers was down that game,” Curry said, “and my head coach promised me before I came to the school that I was gonna break the state record for most catches in a game, and that’s what we did.”

Curry and Gunnell now hope to do big things at Arizona. They were both 4-star recruits—a rarity for this program—and could have continued their careers at a traditional football factory but felt an opportunity to join forces at Arizona was too good to pass up. (Pun not intended.)

“We wanted to do what’s best for us, and I know him coming to Arizona and (Noel) Mazzone, we’re just gonna throw the ball,” Curry said. “So it was a perfect fit for both of us. … It’s a pretty cool place here. We can make history and change the program around.”

Gunnell appears well on his way to doing so after a productive freshman season, but Curry still has everything to prove. His freshman season barely got off the ground because of a shoulder injury he suffered in fall camp. He appeared in eight games in 2019, but only caught six passes for 68 yards, about as many as he’d have in one game at St. Pius X.

“My freshman year was kind of a frustrating, disappointing year, but at the end of the day I went into this offseason during quarantine grinding every day, working hard, improving in all aspects of the game that can help me on the field and I’ve definitely upgraded I would say from a skill standpoint,” he said. “And I feel great. I feel 100 percent healthy now and ready to go.”

Much of Curry’s offseason work came alongside Gunnell, who, according to Curry, has improved his arm strength significantly and is more willing than ever to test it downfield.

Curry, who described himself as a big-bodied receiver with enough speed to take the top off the defense, is excited to see it in action again.

“I used to go to his house almost every week, just stay with him, get some work, work out, study the playbook, so me and his timing is looking great right now,” Curry said.

As if they don’t spend enough time together as it is, Curry and Gunnell are roommates at Arizona, though that’s not really anything new.

“I’m very close with his family,” Curry said. “I’m talking about family gatherings, family dinners, Thanksgivings. I used to kind of like stay with them. So they really took me in in high school and I can’t thank them enough for that, honestly.”

Arizona fans will be grateful too if Gunnell and Curry are able to rekindle some of that St. Pius X magic in Tucson.

“That matters,” Curry said of their history together, “because at the end of the day, when things are rough and tough on the field, when it’s hard to move the ball downfield, we always had a little connection to make a play happen, to get through adversity.”

Among the other things Curry discussed in his Tuesday Zoom interview is how he got the nickname “Boobie.” (His first name is actually Jalen.)

He originally thought he was named after Boobie Miles, the former Odessa-Permian High School star portrayed in Friday Night Lights.

“I got it from a family friend who passed away that’s related to Jaylen Waddle, the receiver at Alabama,” Curry said. “Me and him are pretty close, so I got it from his Auntie.”

Curry said he only became aware of that during his junior year of high school. He wasn’t a fan of his nickname until then.

“I definitely took it in, especially when everybody started calling me it,” he said. “And it’s something different. It’s like a marketing thing. Like Pacman Jones, that’s not his real name. Haha Clinton-Dix, Ha Ha is not his real name. So I’ll take it in and we’ll just go from there.”

Curry’s mother and brothers are pretty much the only ones who don’t call him “Boobie” these days.

“My mom don’t like the nickname Boobie,” Curry said. “She loves Jalen.”

Arizona WR Jalen Curry said he didn’t like his nickname “Boobie” until he found out he got it from a family friend who passed away.

“I definitely took it in, especially when everybody started calling me it. It’s something different. It’s like a marketing thing.” pic.twitter.com/1NCmYcD7LX