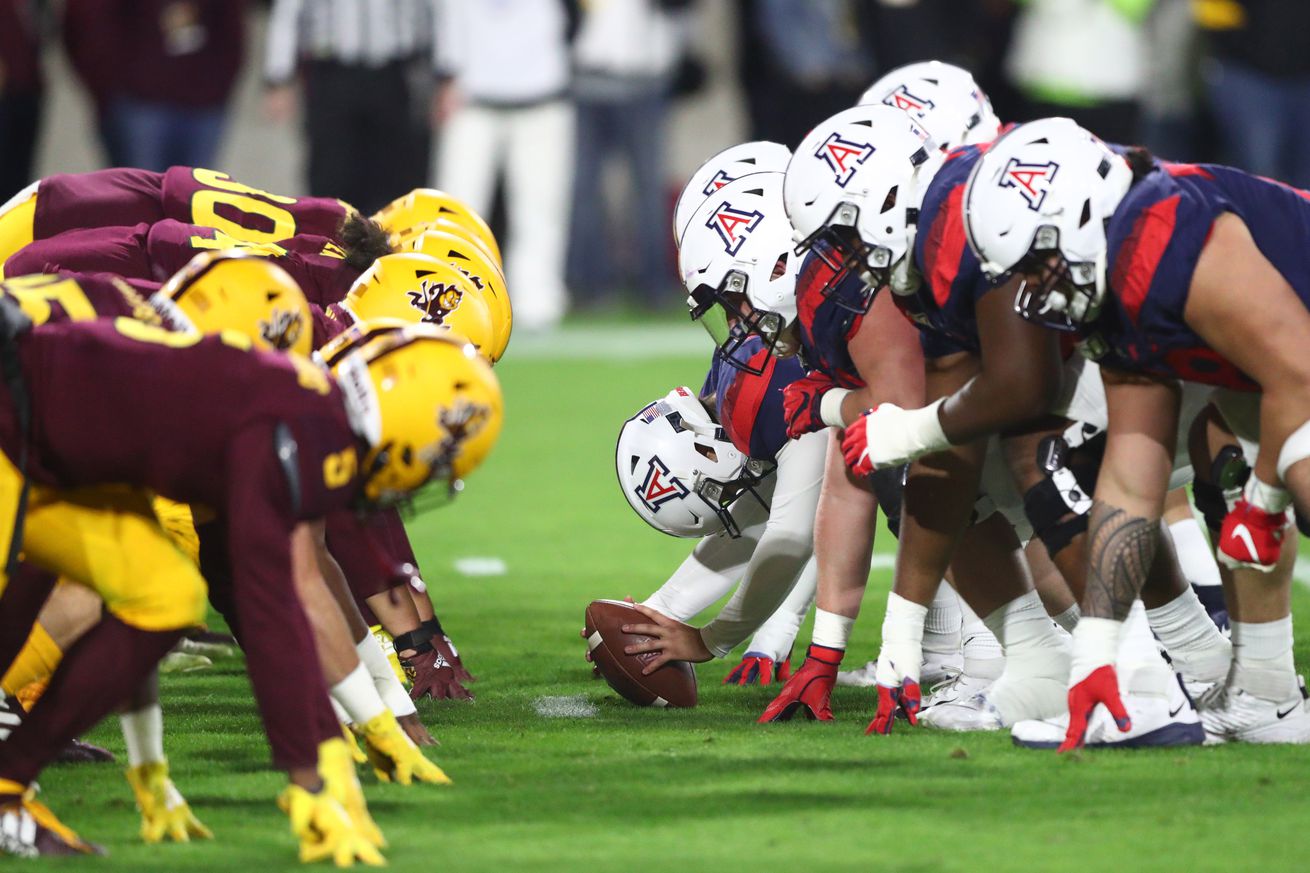 There was a direct correlation between Arizona’s offensive line and the Wildcats’ overall performances in 2019.

In starting 4-1, while averaging 38.6 points per game and 7.28 yards per offensive play, the UA started the same five guys on the O-line. Six, actually, as Edgar Burrola and Paiton Fears platooned at right tackle during that time with fairly equal snap counts.

Then left guard Robert Congel had to sit out Arizona’s sixth game, forcing Fears to move to his spot. A week later right guard Cody Creason couldn’t play, pushing Bryson Cain into action. Congel came back after missing two games, but two games after that center Josh McCauley was out along with Cain, forcing walk-on Jon Jacobs to start at right guard.

By the time the season was over the UA had used nine different starting fives up front, including seven unique ones over the final seven games. Not surprisingly, Arizona lost all seven games while averaging only 19.7 points and 5.14 yards per play.

“Last year it was a tough time,” offensive line coach Kyle DeVan said Thursday night via Zoom. “We had the injury bug in the O-line room.”

But all that turmoil has borne a great deal of order for Arizona heading into 2020. For one, it returns nine offensive linemen who started at least one game last year, including its left tackle of the future in Jordan Morgan, who started two of the final three games there as a true freshman despite the presence of two-year starter Donovan Laie at the position.

And the addition of six players from the 2020 recruiting class, including a junior college transfer and one who played at the Division II level, and suddenly Arizona is overflowing with big bodies in the trenches.

“It’s nice, I’m not gonna lie,” said DeVan, who has 18 linemen under his guidance. “It’s really been awesome, having a lineup of five guys, and then having a second lineup of five guys and then a third lineup. And then if someone goes (down) we’re just plugging in that next guy, instead of what we’ve had to do in the past, where your left guard went down and you moved a right tackle to left guard, then you moved a center to right guard to fit the pieces.

“Now we’re able to train guys and properly train them. It really provides depth because it allows guys to hone in on a certain spot. We got a lot of veteran guys that have played a lot of games now and are really getting better, then we have some young guys that are coming in and pushing them.”

It also helped that his most talented lineman, Laie, reversed course on his decision to transfer a few weeks back. Having him back enables DeVan to continue with the plan that he put into place late last season when Arizona inserted Morgan into the starting lineup.

“What we thought was best for the team was to move Donovan inside and allow Jordan to play at left tackle where he’s a little bit longer, kind of fits that spot a little bit more,” DeVan said. “It’s what we had to do last year, knowing in the future it’s probably going to look like that. Donovan can play tackle in our league, there’s nothing wrong with that, but he can really be a strong, athletic guy on the inside. When you project to the next level, you like those tackles, guys that played tackle in college that can move inside, that have the girth.”

Said Laie of Morgan: “This is like the first time I’ve ever played with someone as athletic as me. It just makes my job easier.”

For the 6-foot-4 Morgan, a Marana High School product who stuck with his Arizona commitment despite a late push from USC, the key for him has been building off his first-year experience. It started off roughly, with him being flagged for multiple false starts on field goal attempts in the season opener at Hawaii—“It was the first time I’d ever heard a crowd that loud,” he said—to being the blind-side protector for Khalil Tate and Grant Gunnell.

“I know I can hold more weight,” he said. “I know I can move more fluidly with this weight. I can’t get blown back that bad anymore.”