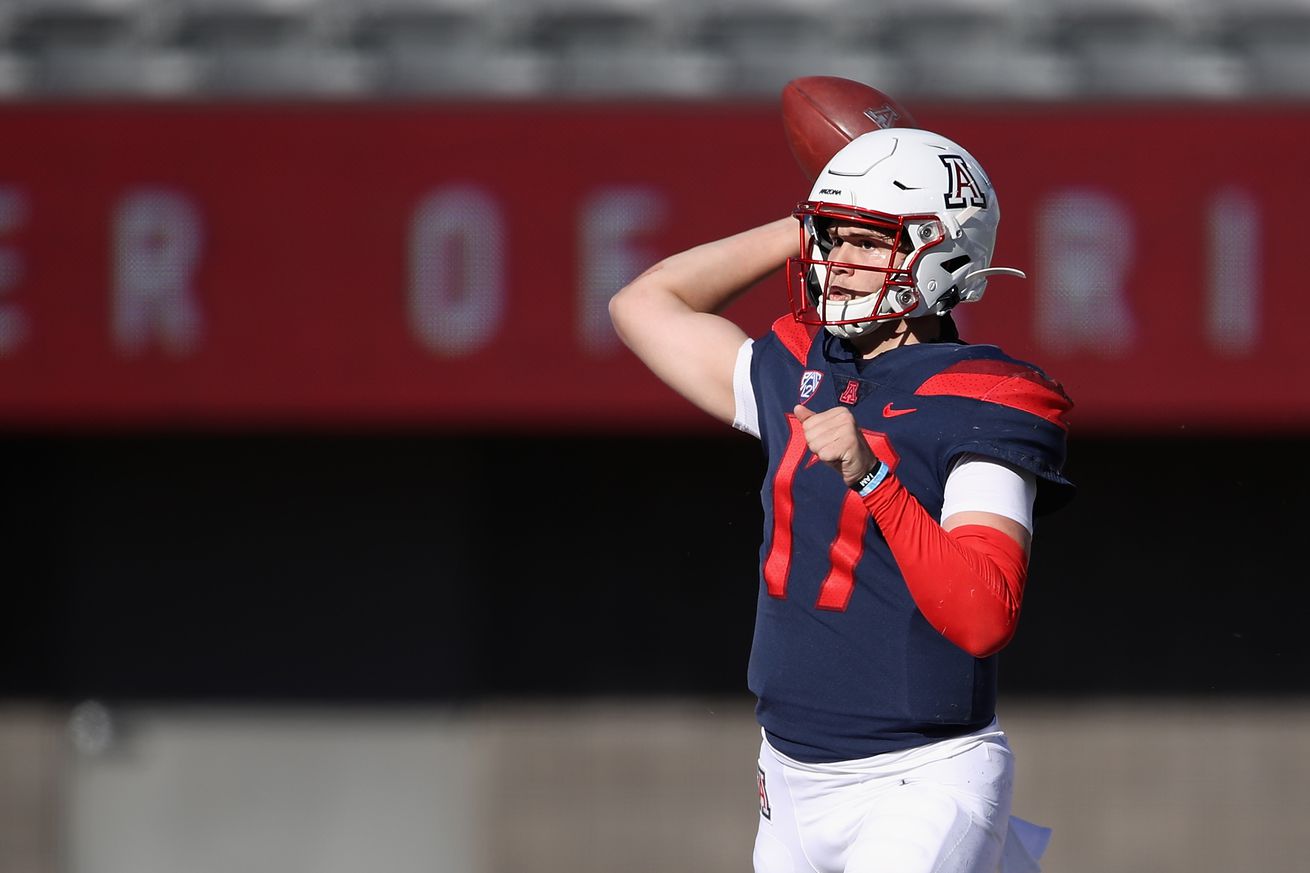 The Arizona Wildcats played a hard-fought, tough loss to the USC Trojans on Saturday. The ‘Cats performed way better than anyone might have suspected.

It’s tough to come away with moral victories in college football, but there are definitely bright spots for Arizona to build off of the rest of the season.

There were quite a few players who made an impact for Arizona.

With that, let’s see who the players of the game were.

Gunnell really did have a good game. He did make some mistakes, expected after not playing for almost a year. The big one was the overthrow and subsequent interception that led to a Trojan touchdown. However, he bounced right back and took the lead for the team.

His throws, for the most part, were on point and accurate. He threw a very nice deep ball that landed perfectly in Tayvian Cunningham’s hands for a long touchdown. He hit his receivers in stride and, minus the interception, protected the ball.

His ground game was what opened the most eyes. He ran when the defense gave it to him and he made them pay. As a matter of fact, his run game extended drives and helped keep the offense in rhythm.

If Saturday was any indication, Gunnell is going to have an amazing career.

Brightwell had himself a game. His first as the premier back, Brightwell managed to rip off plenty of big runs and had a few runs that kept drives alive.

Brightwell is always a threat to bust a big run, especially with his speed, and he did just that today. In the second quarter, with Arizona inside it’s own 10, Brightwell gashed USC’s defense for a 34-yard sprint down the sideline to give the Wildcats some breathing room.

Another play that stood out to me came a little later in the same drive. Arizona was facing a 3rd and 15 and Gunnell dumped off a screen to Brightwell. He then preceded to make two or three USC defenders look silly with a nice juke in the backfield and exploded for 15 yards and the first down. This drive ended in a Lucas Havrisik field goal.

This was a difficult choice, but I eventually decided to go with one of my breakout players.

For the mistakes that were bound to happen to a player starting his first collegiate game, I thought Turner played well enough to cancel and even make-up for those mistakes.

He tackled well most of the game and had a key pass breakup in the end zone to force USC to kick a field goal.

He got called for a questionable pass interference call, but seeing that play a couple of times, I’m not so sure he did anything wrong. Overall strong showing for Turner in his first start.

Freeburg starting was a surprise to a lot of people, myself included. He did a great job taking advantage of his opportunity.

He was very active all game and, though his stat line won’t blow you away, his tackles for loss were clutch.

On a 1st and 25 for USC, Freeburg came flying in to drop RB Kenan Christon in the backfield for a loss of 3. Unfortunately, Arizona was called for an extremely questionable pass interference on an uncatchable ball two plays later.

The other TFL was his best play. In the third quarter, with the Trojans inside Arizona’s 10 and driving, USC decided to go for it on 4th and 1. Freeburg came flying in from the edge and blasted RB Markese Stepp for a loss of two and a turnover on downs.

I was impressed with Freeburg’s play and I’d expect him to continue that type of play.

Loop was phenomenal as the punter. He literally flipped the field every punt. USC got decentish field position after a targeting call. That’s not even Loop’s fault. Loop has a bigger leg that I originally thought and he could be well on his way to solidifying his role as the team’s starting punter.

Havrisik missed his very first attempt of the season, a 42-yarder. However, he bounced back nicely as the game progressed. He made his next three field goals, with the longest being from 51 yards. Havrisik will need to continue to be consistent this season and put the inconsistencies from last season behind him.