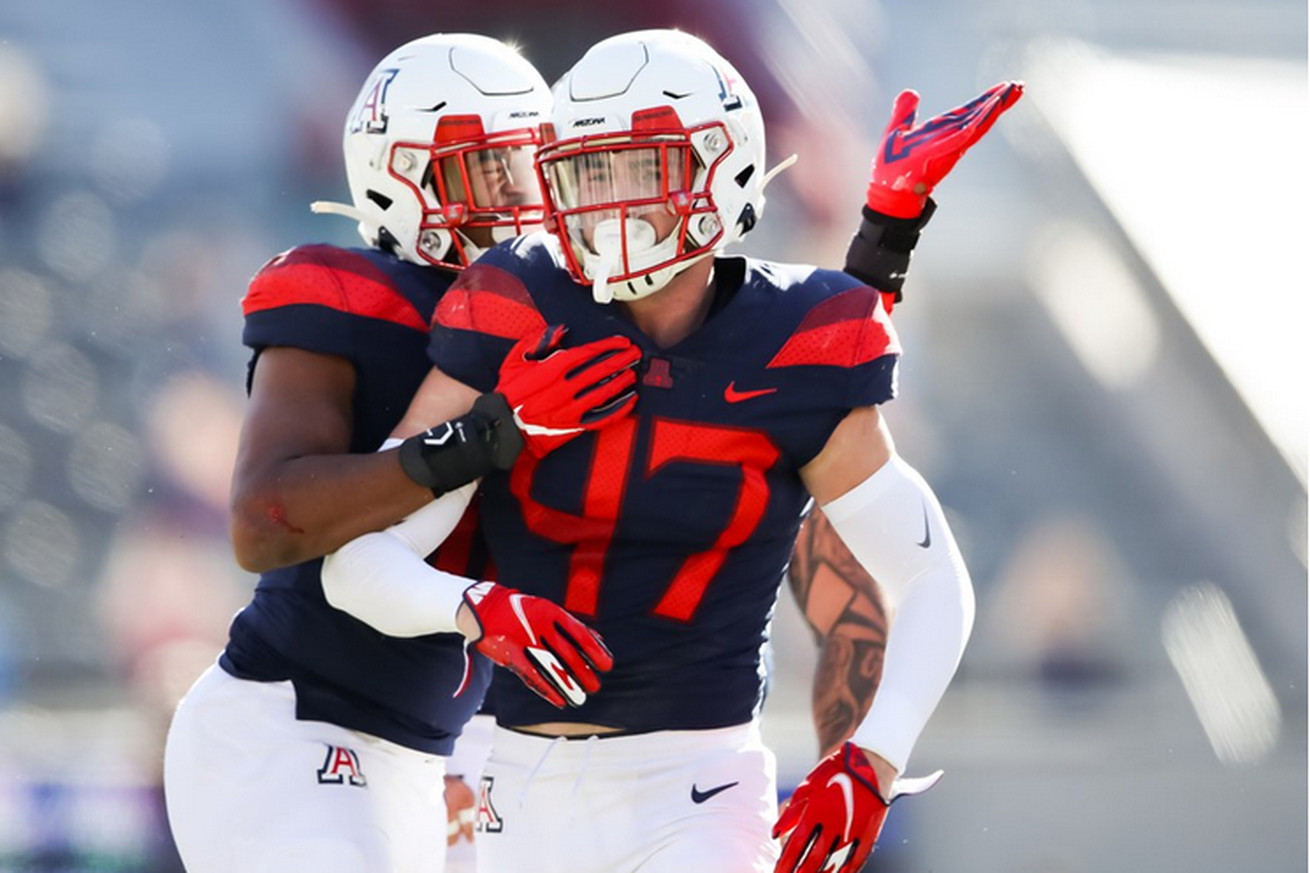 Saturday’s loss to USC marked the Arizona debut for several players, while for others it was the first significant action of their college career.

The Wildcats had seven new starters on defense, most of which were expected based on training camp chatter and the the initial depth chart.

But when Arizona sent that unit out for the first time in 2020—thrown into the fire right away after an interception gave USC a short field—there was a big surprise in the middle of alignment.

Rourke Freeburg, a redshirt junior walk-on, was the starter at Will linebacker. He was actually one of two walk-ons Arizona had in the starting lineup at LB, with fellow redshirt junior Parker Henley at the Mike spot.

It turns out that wasn’t a last-minute decision, but one that had been in the works throughout the preseason.

“I’d actually been starting the entire fall camp,” said Freeburg, who finished with five tackles including two tackles for loss. “I’d been running with the ones and I figured all summer I was getting the nod. Come game week, after running with the ones for three weeks and getting ready for Utah I was told I was the starter.”

Linebacker is by far Arizona’s thinnest position, a situation borne from the summer transfers of seniors Tony Fields II and Colin Schooler. It was expected that Freeburg and Henley would get meaningful snaps, something outside linebackers coach Andy Buh intimated during the preseason, but signs pointed to true freshman Derick Mourning and redshirt freshman Kwabena Watson would start alongside senior Anthony Pandy and redshirt junior Jalen Harris.

Mourning and Watson played, but not nearly as much as Freeburg and Henley, who contributed three tackles in his first career start.

Freeburg didn’t just start, he might have been Arizona’s most impactful player on defense. His second TFL came in the fourth quarter when he flew into the backfield and stuffed a USC running back for a loss on fourth down inside the 10-yard line.

Finally getting to make a contribution outside of special teams was the culmination of years of dedication, as well as unwavering confidence.

“If you would have told me like two or three years ago that your senior year you’d be starting I’d honestly have been like, ‘yeah, you’re probably right,’” he said. “That’s just the mentality I show every day, I work hard and want to earn that spot. There’s not a lot of walk-ons that are starting in the Pac-12, or really across the country. I take a lot of pride being a walk-on starting on this defense.”

The Scottsdale native walked on with Arizona in 2017 after missing his senior year at Desert Mountain High School due to a broken collarbone. He believes that injury kept him from being recruited at the level he had hoped, but rather than use that as an excuse he used it as motivation.

“I play with heart, I play with passion,” he said. “Out of high school I didn’t get a lot of looks, recruiting-wise. I understood that it was going to take hard work and showing up every day and busting my butt to earn a role on this team. This is what I want to do as long as I can.”

Freeburg said his father, younger brother and girlfriend were among the 500 or so people in attendance at an otherwise empty Arizona Stadium. The lack of a crowd actually worked in his favor, he said, because most of his work to this point had been done without fans to witness it.

“It’s funny because being a guy that hadn’t really played a whole lot the last few years, and being on the scout and really only playing special teams, it was like my only opportunity was like on special teams or to make plays in practice,” he said. “Always in an empty stadium.”