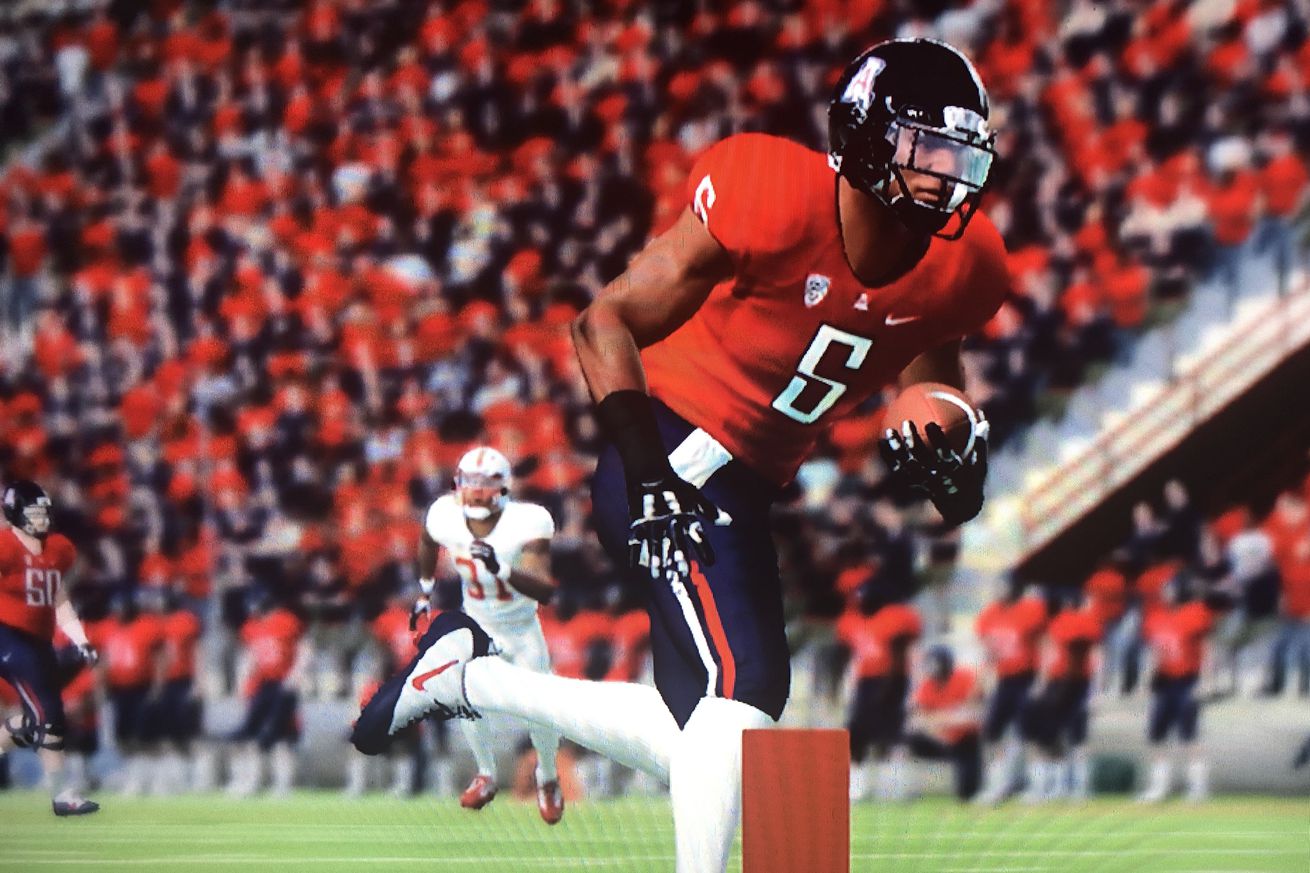 (Editor’s note: Since the Pac-12 is not playing football this fall, we’re going to simulate all 12 games on Arizona’s original schedule on NCAA Football 14 and recap them on the dates they were supposed to be played. Enjoy!)

Knowing they were overmatched in the trenches, Arizona made its game plan against Stanford very clear on its opening drive.

It was throw, throw and throw some more.

Sophomore quarterback Grant Gunnell completed 11 of 12 passes on Arizona’s opening drive—which culminated with a one-yard Gary Brightwell touchdown run—and went on to complete 44 of 56 passes for 437 yards, three touchdowns and an interception as the Wildcats staved off Stanford 27-20 at Arizona Stadium to move to 2-1 on the season.

There were some late heroics by Gunnell too.

He connected with Brian Casteel for the game-winning touchdown with 7:15 left in the fourth, finding the junior in the back corner of the end zone for Arizona’s only points of the second half.

Grant Gunnell drops it in the bucket for the go-ahead touchdown, right in front of the Stanford Tree and a cameraman that might be @DavidKellyKVOA.

Gunnell’s two other TD passes came in the second quarter, both to Brenden Schooler. A 40-yard pass deep down the right side made it 14-10 Arizona and a 24-yard connection extended the lead to 20-10 with 3:11 left in the first half.

A long completion to Brian Casteel and his second TD pass has Arizona up 20-10 on Stanford. #SimSeason pic.twitter.com/QKqA4S1Aph

(In a touch of bitter irony, Schooler also had a real-life 40-yard TD on Saturday night for Texas, where he transferred to in August.)

Stanford, which relied heavily on its ground game, cut the deficit to 20-17 just before the half with a nine-yard plunge by running back Austin Jones.

The Cardinal tied it early in the third quarter with a chip shot field goal by Jet Toner, but otherwise was stonewalled by an Arizona defense that has been surprisingly stingy to this point.

Jones rushed for 140 yards on the night, but needed 37 carries to do it.

Davis Mills completed 21 of 26 passes for 230 yards and a play-action touchdown that gave the Cardinal a 10-7 lead early in the second, but Stanford was held to 5 for 15 on third down and 1 for 2 on fourth down.

The Wildcats still haven’t forced a turnover this season and only had one sack Saturday, but it came at an opportune time.

Up seven with 2:23 to play, New Mexico grad transfer Aaron Blackwell brought down Mills on 4th and short at the Arizona 2 to seal the win.

Arizona comes up with a huge sack on 4th down, and it looks like they’re gonna hang on and beat Stanford. #SimSeason pic.twitter.com/ZVApcOo918

That was after Gunnell made a rare mistake to keep the Cardinal alive, getting intercepted deep in Stanford territory as the Wildcats tried, perhaps overzealously, to ice the game with their offense—a true Pac-12 After Dark moment.

Arizona just had a chance to ice the game, but instead we got a #Pac12AfterDark moment.

Stanford has new life late in the 4th. #SimSeason pic.twitter.com/ozg0fyueTH

One of them forced Arizona to settle for a 56-yard field goal attempt late in the third, and Lucas Havrisik‘s kick banged off the right upright to keep the game tied at 20-all.

But Arizona’s defense immediately forced a three-and-out and Gunnell tossed the game-winning touchdown moments later to cap a 12-play drive. He’s now thrown seven TD passes over the last two weeks after being blanked in the heartbreaking loss to Hawaii.

The Wildcats will wrap up their non-conference slate next Saturday against Texas Tech in Lubbock, looking to extend their winning streak to three games before a bye week and the rest of Pac-12 play.

Pretty sure Gary Brightwell crossed the plane on his first carry, but oh well. The second time is the charm!

Arizona has an early 7-0 lead on Stanford after a sharp opening drive. #SimSeason pic.twitter.com/42vE91YEWG

A beautiful strike by Grant Gunnell puts Arizona back on top here in the 2nd. #SimSeason pic.twitter.com/drdaCzRkR3

No defense allowed in the second quarter, apparently.

Arizona’s lead down to 20-17 as we head to the half. The guys need a pep talk after this. #SimSeason pic.twitter.com/Qfq8maM73w

A 56-yard attempt clangs off the upright and we remain tied at 20 late in the 3rd. #SimSeason pic.twitter.com/9boMcvaT48

Stanford got another chance to tie it, but ran out of time because of some awful playcalling.

Arizona wins 27-20 in the most anticlimactic way ever. #SimSeason pic.twitter.com/q4XOytFkzw