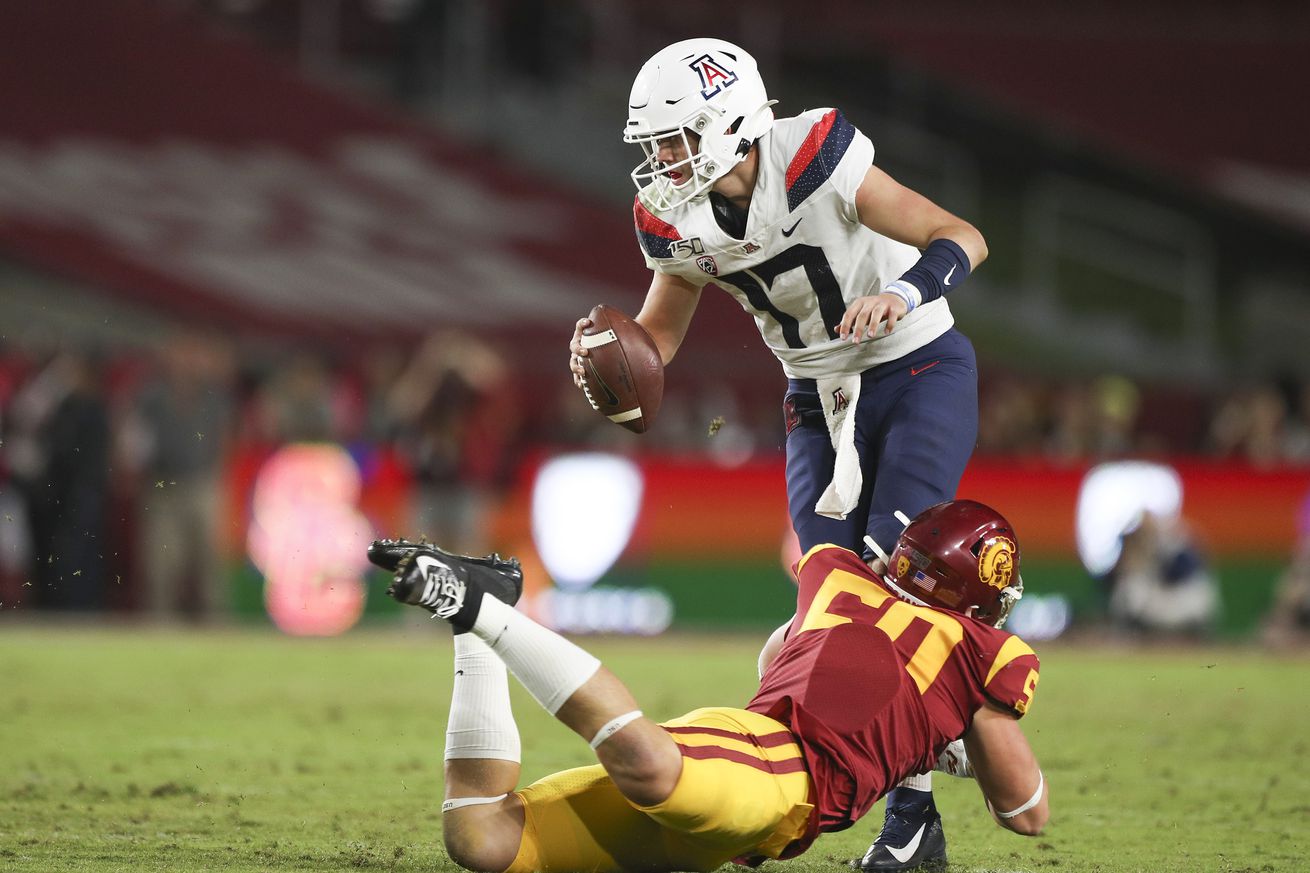 Let’s try this again, shall we?

The Arizona Wildcats will hopefully open their 2020 season at home against the USC Trojans on Saturday, their first game in nearly a year. An empty Arizona Stadium, save for a few friends and family, will serve as the venue for a Pac-12 South Division matchup against the predicted division winner.

To better understand USC, which rallied to beat ASU 28-27 last week in Los Angeles, we reached out to Cam Mellor of SB Nation sister site Conquest Chronicles to find out more about the Trojans. Here are his expansive answers on our terse questions.

Quarterback Kedon Slovis completed 72.7 percent of his passes against ASU, including that game-winning throw to Drake London at the end, but he also made some mistakes. How has he progressed from his freshman year, when he was thrown into the fire, to now when he’s firmly entrenched as the guy?

Slovis did a great job in Week 1 of taking what was given to him before ultimately making some throws of his own late in the game. It was, however, ultimately a relatively unimpressive season debut that gets buoyed by his second career game-winning drive. In terms of his progression, though, I loved what I saw in the fact that ASU’s zone coverage really stymied him from the first possession on but he continually learned on the fly and eventually found his opportunities to make the throws he knows he can make. His football IQ is off the charts (just look at the fourth down TD toss to Bru McCoy) and that should carry him about as much as his top-level throws will over his career as he continues to progress.

The Trojans graduated a 100-catch wide receiver yet somehow seem even better at the position than in 2019. Is this group the real deal, particularly the younger guys who showed out in the opener?

It’s a hard thing to say that this receiving corps is a better unit after Michael Pittman Jr. left for the NFL, but it really opens up the chances for players like Bru McCoy and Drake London to see more targets. And as that was proven in Week 1, that was a great thing as London really even blew past his lofty expectations with that performance. London is a dual-sport star and really has shown to be a better after-the-catch receiver than even Amon-Ra St. Brown. And lest we forget, Tyler Vaughns is a 100-catch, 1,000-yard kind of guy as well (in a non-COVID season, of course). Oh, and there’s talented true freshmen who we’ll ultimately see at some point too, so this unit is deep, talented and isn’t going anywhere anytime soon.

How would you rate the defensive performance under new coordinator Todd Orlando? Is the blitzing going to be a regular thing or was that specific to dealing with the Sun Devils?

Orlando’s defense is predicated on getting pressure on the quarterback one way or another. Their defensive performance was solid overall and with any performance that limits a quarterback’s completion percentage below 50 percent, the coverage unit is going to be heralded as the top performers of the game. However, I think the pass rush was integral because as we all know, blitzing doesn’t mean the quarterback actually gets pressured. Sure, they blitzed on well over 75 percent of the dropbacks they faced, but more often than not, it was the defensive linemen who were getting home before blitzing players were able to. This defensive line is formidable and be on the lookout for big ol’ No. 93, Marlon Tuipulotu, as he is a true havoc-wreaker.

USC got to play already, while Arizona had to unpack before it ever got to head to Utah for its opener. How, in any way, does this benefit or hurt the Trojans going into Saturday’s game?

USC got to adjust to the speed of the game already. It also got to get hit in the mouth already. That’s an unquantifiable metric in this day of analytics infiltrating football—and we’ve seen it time and time again with teams who had their games postponed or canceled and then had to take on teams who had played one or multiple games. They’ll come out firing but ultimately the biggest issue is that of speed being different, the hits taking their tolls, and as silly as it sounds, cramping becomes a big deal for those teams without a game played versus teams who have played. It’s a large benefit, especially if you’re like USC, who escaped the game against Arizona State with minimal injuries.

Prediction time: Do the Trojans get an eighth straight win over Arizona or do the Wildcats deal an early blow to USC’s conference title (and playoff) hopes?

There’s nothing in me that says this USC isn’t the best team in the South—and as much as I fear Grant Gunnell’s throwing ability—the pass-rush and coverage units looked so sharp in their season debut that I think they can do enough to limit the potential aerial assault from the Wildcats. USC wins, but I don’t think it’s as big a win as many may predict or as Vegas is predicting now. I fully expect (offensive coordinator) Graham Harrell and Slovis to avoid those talented cornerbacks and take what they can down the middle of the field to exploit what, on paper, looks like a potential mismatch. Watch out for Drake London after the catch, and as surprising as it sounds, this talented trio at running back to even take over in the fourth quarter. USC wins, by 10.