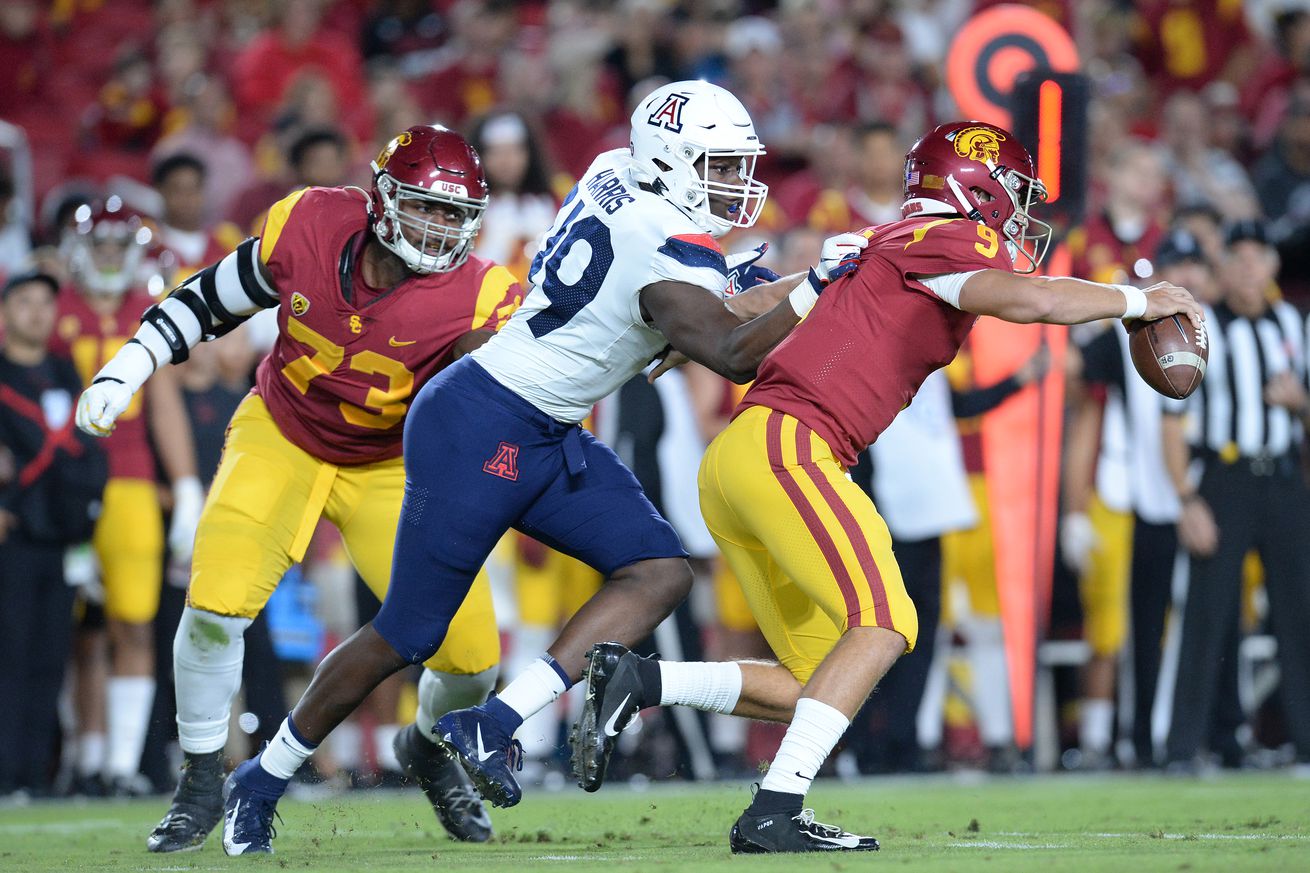 The Arizona Wildcats are supposed to begin their 2020 football season on Saturday against the USC Trojans, but then again they were supposed to have started a week earlier at Utah and that didn’t happen.

Assuming the 1:30 p.m. MT kickoff at Arizona Stadium does happen, here is how our staff expects this Pac-12 South Division battle to go down:

USC already has plenty of advantages over Arizona from a talent standpoint, but now the Trojans also have the luxury of having a game under their belts to work out the kinks—and figure out how to rally from down 13 points in the fourth quarter. That means they’ll have had a week to figure out what needs to be fixed before coming to Tucson.

Arizona? It’s only edge that might come from not playing last Saturday was that USC has no real idea what to expect from the Wildcats beyond what it saw from 2019. How much that might help the UA is unknown, but probably won’t be enough to make a difference in the outcome.

Beating USC would be great, but more than anything the Wildcats need to show they can be competitive and that their defense is making strides under a new staff. Offensive consistency will also be welcomed.

I had actually predicted Arizona to beat Utah last week, but you won’t find the same optimism from me here.

Historically, USC has dominated the Wildcats over the last 25 years—losing just four times—so truthfully it’s hard for me to ever pick Arizona to win this game. What I saw from the Trojans last week against Arizona State troubles me, too.

Sure, SC was the inferior team for the first 57 minutes of the game against ASU and probably should have lost, but quarterback Kedon Slovis absolutely went off against the Sun Devils—completing 40 of 55 passes, racking up 381 yards, and tossing two touchdowns—a performance that broke the program record for completions in a game.

So, it’s safe to say this: the Wildcats largely new group in the defensive secondary is going to be tested Saturday afternoon at Arizona Stadium. In a big way.

How that group looks against Drake London, Amon-Ra St. Brown and company will probably be the deciding factor if this game is close or not.

If Arizona is to get a win, it is also going to need to put pressure on Slovis (something it couldn’t do to any quarterback in 2019) and a big day on the ground from the likes of Gary Brightwell, Michael Wiley and Nathan Tilford as well.

Stopping the run seemed to be the biggest problem for USC’s defense against ASU.

But I just don’t see it happening, I think the Trojans’ offense will prove to be too much for Arizona’s new-look secondary and that in the end, the Wildcats will have lost all three of their opening games of a season under Kevin Sumlin.

I feel like USC playing last week and getting the rust off and being able to make corrections outweighs Arizona’s ability to evaluate film and scheme accordingly while not having to feel the aches of playing a football game for the first time in almost a year.

Arizona might be able to put up 28 on the score board but the defense just won’t be able to last.

This won’t be pretty. I actually don’t even expect this to be close early. My expectation for last week was there would be opportunity for the defense to break into the new season against a Utah team which is fielding a lot of new faces.

However, that game didn’t happen and now we’re looking at a situation where Arizona’s defense will showcase its new scheme against Kedon Slovis and an offense that tallied more than 500 total yards of offense last week against ASU.

The only hope is the Trojans do not correct their ball-security issues and Arizona’s offense is able to capitalize on those mistakes. It feels like a long shot which means I’m not expecting much of a game. I’ll be watching, though!

When the shortened schedule was released there was really only one game that I was absolutely sure Arizona would lose, and it’s this one.

That it has turned out to be the Wildcats’ season opener makes things a bit different, but I’m honestly not sure if it’s in a good or bad way. It probably doesn’t matter.

Though USC needed some luck to beat ASU at home last week, the Trojans are a very talented team. It’s difficult to imagine Arizona’s new-look defense containing QB Kedon Slovis and his myriad weapons, and at the same time if the Cats fall into an early hole it will do Grant Gunnell and his offense no favors.

Hopefully this will be a competitive loss, or at least as competitive as a 20-point defeat can be. If nothing else it’s our first chance to see Arizona play football in nearly a year, and for many of us that’s a win in and of itself.

I originally thought this could get ugly, but now, I’m not so sure. The Trojans don’t have any recent game film on Arizona, whereas the ‘Cats have last week’s game to study.

Couple that with USC not looking very great, and it could be a close game.

I think it’ll be competitive, but the Trojans will be able to make one more play than Arizona and sneak away with another win.

I think Arizona can win this game, but it HAS to get off to a super fast start. If the Wildcats fall behind and are forced to be predictable with their passing game, USC’s pass rush will win out just like it did last year when Gunnell took some huge hits (and threw an interception) against the Trojans.

They also need to win the turnover battle, but that seems like a longshot seeing that this is their first game and USC’s second. You’d figure the Trojans will be sharper.

I’d be shocked if Slovis doesn’t put up big numbers. USC has great receivers and Arizona’s pass rush has been terrible the last two years. If Arizona wins, it’s going to be have to be in a shootout.