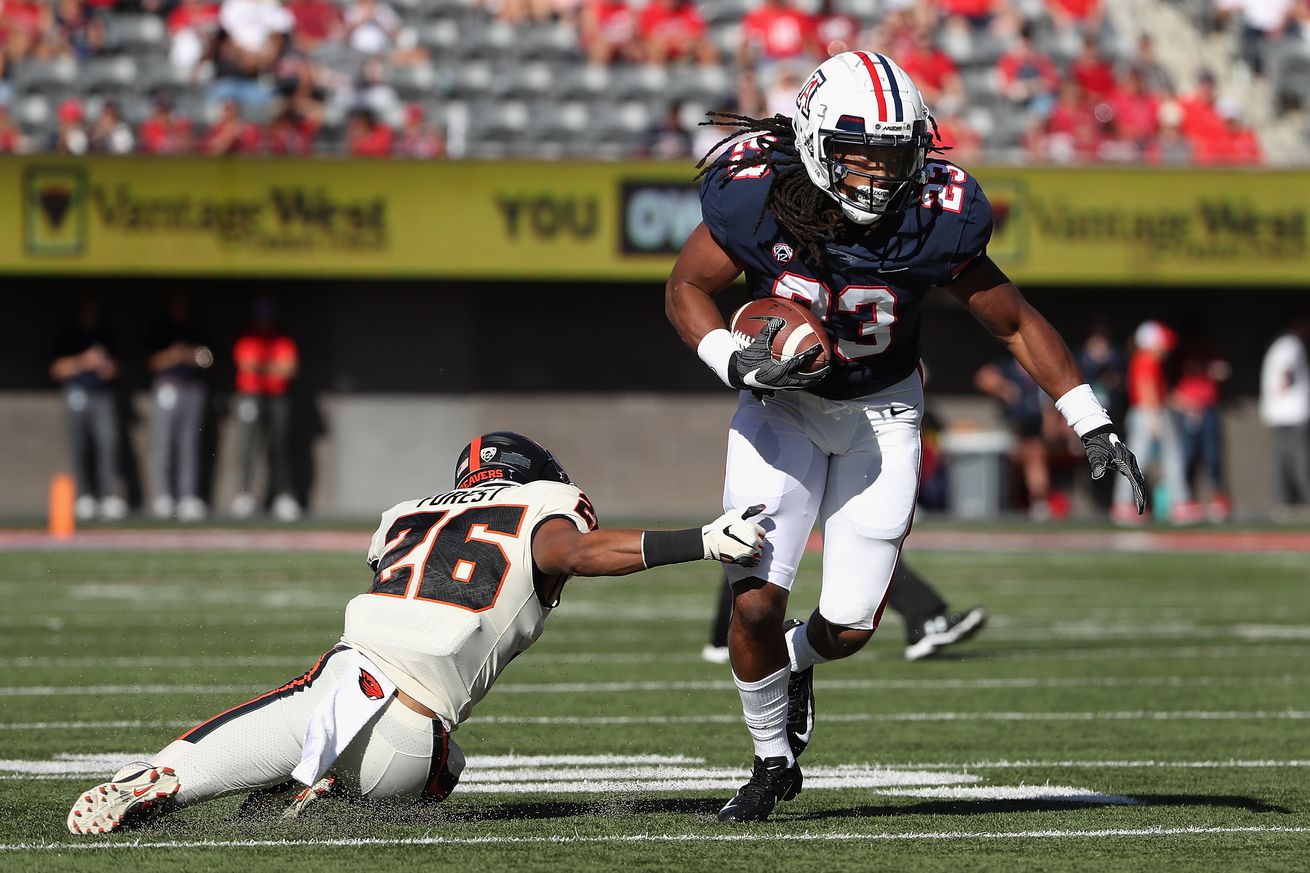 Welcome to our new series in which we try to determine if the Arizona Wildcats’ position groups are in strong, stable, unstable, serious, or critical condition heading into fall camp. Next up are the running backs.

Arizona loses J.J. Taylor to the NFL but brings back three returners who have had increasing roles since stepping foot on campus.

Gary Brightwell will take the reigns as the starting running back after scoring 10 touchdowns on about 1,000 yards over the last two years. The senior has been one of the fastest players on the team regardless of position, which is even far more impressive considering his size at 6-foot-1, 210 pounds. With what should be a much improved offense under quarterback Grant Gunnell and a handful of returning starting linemen, he could be in line for a 1,000-yard season.

This is where things get crazy. Arizona returns Darrius Smith, Nathan Tilford and Michael Wiley, all of whom had over 30 touches apiece last season, combining for 887 rushing and receiving yards.

With DeMarco Murray gone and AJ Steward in at running backs coach, it will be interesting to see how he favors each running back and their skill set. Noel Mazzone surely has a pecking order of his own for his offense, but it will be hard to predict who exactly comes out as the No. 2 running back, although it won’t necessarily matter the order given that they’ll all have pretty sizable roles.

I’d guess Smith is the leader simply because of his involvement in the offense over the last two years in both the pass and run game. He is a shifty little back that really picked up more work as a receiving back last season, often available in the flats or deep on a wheel route.

What makes the running back situation even more complicated is that former four-star prospect Nathan Tilford is technically Arizona’s second leading returning rusher in carries, yards and touchdowns after taking 37 carries for 228 yards and four touchdowns last season. Still only a redshirt junior, perhaps Tilford has turned the corner and is ready for an extended workload.

Michael Wiley played a large amount of snaps last season considering he was a true freshmen in a crowded backfield. Most of his damage was done as a pass-catcher, reeling in 18 balls for 165 yards, which tops all running backs. His skill set is similar to Smith’s.

Arizona could definitely go 12 games (or 13 depending on a bowl) with just these four running backs. They would have been totally fine without adding a back in the 2020 class. But Arizona’s top two signees just so happen to be running backs with Frank Brown and Jalen John.

Brown is probably the best athlete of the class, showing off electrifying speed and play making abilities in his highlights. John is much more of a downhill, one-cut running back with a strong body at 5-foot-10, 180 pounds. Either one of them could jump out in camp and make a case for a rotational role.

Steward is a lucky man taking over this group. He has six legitimate running backs who could contribute at a high level. All are capable of being strong backups to Brightwell and can excel in the offense. It’s by far the strongest position on the roster, and perhaps as strong as we’ll ever see this group from top to bottom.

Someone has to pick up Taylor’s 180 touches from a season ago. While Brightwell will assume a large chunk of it, the distribution of touches and depth at running back will always give the offense fresh legs and plenty of options.