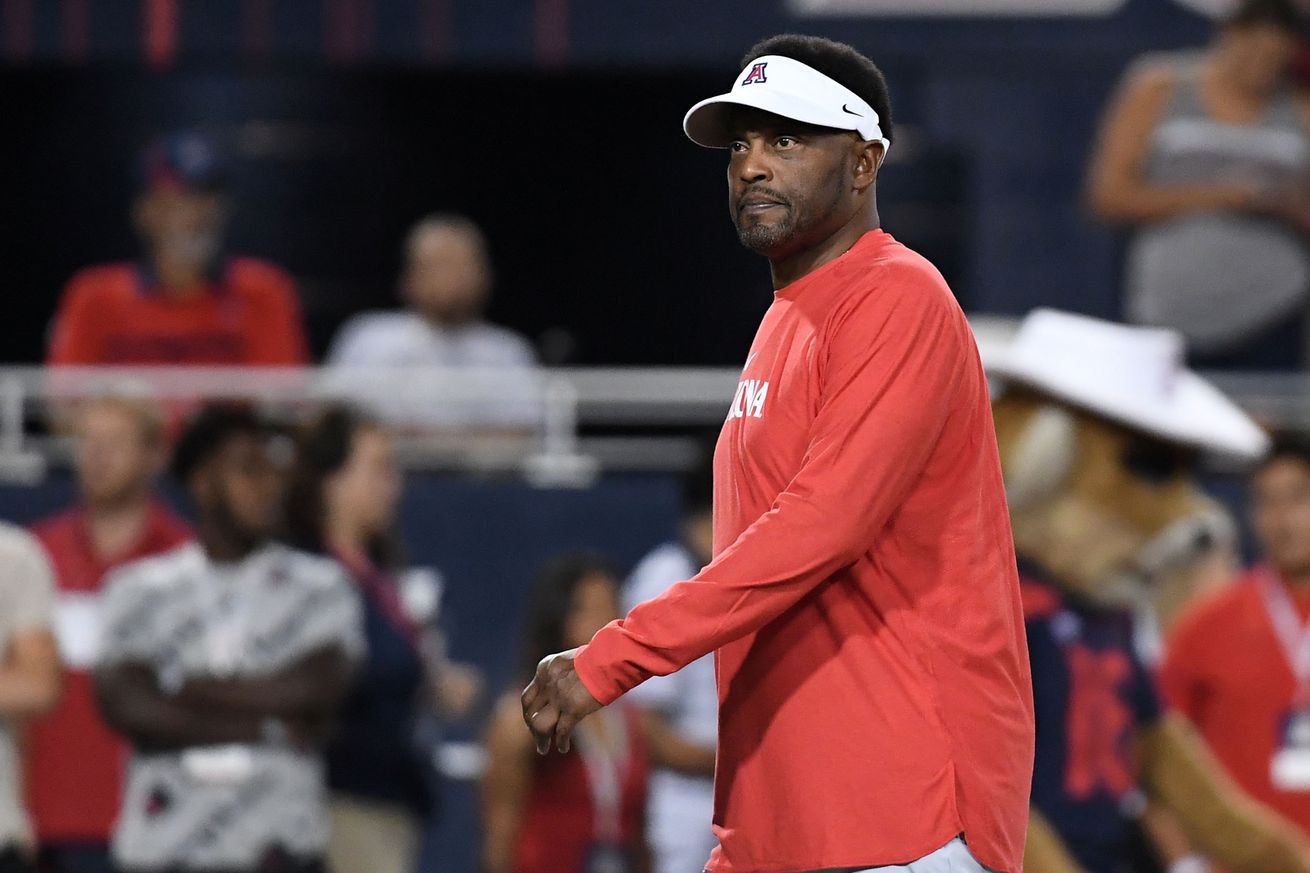 The Arizona Wildcats held a 90-play scrimmage on Saturday night, the first chance for the revamped coaching staff to see what it had to work with for the 2020 season.

“It was really a complete operational scrimmage,” Kevin Sumlin said via Zoom. “We got just about everybody in. We’ve got some depth. I thought our guys competed. Not a whole lot of penalties, I think we had one offsides on offense and one penalty on defense. That’s the first thing you’ve got to do to win games, and then eliminate some of those things and substitution situations that maybe earlier in the week we didn’t have that.”

Arizona is taking Sunday off then will go six straight days, Sumlin said, with a “red zone, tight-zone scrimmage so we can see some physicality out of these guys” on Thursday and a full-fledged scrimmage next Saturday.

“Then we’ll know who we are with two weeks to go to get ready for game preparation,” he said.

Here’s what else Sumlin said Saturday night. (His full interview can be watched HERE or at the bottom of this story.)

On the scrimmage: “We went 90 plays tonight. That’s without special teams. We had 90 plays, we kicked field goals, I thought Lucas (Havrisik) was good, he made I think a 57 and a 53 tonight. We worked a little bit, not just open-field, but special teams, and Kyle Ostendorp hit some great punts, so that’s encouraging from a kicking game standpoint. We’ve got some guys that are returning that have to get better, and they’re showing that.

On the status of center Josh McCauley and the offensive line as a whole: “Josh does have a knee issue. We know Josh can play. We’re keeping things the way they are. It’s given us an opportunity to leave everybody as is. We’re going to leave our line the way it is, keep not moving guys around all over the place. Jordan (Morgan) is at left tackle and Donovan Laie at left guard right now, they’re communicating very, very well. (Robert) Congel and Paiton Fears are on the right side. And then what we’re doing now is finding a backup center right now. I thought those guys operated pretty well.

“We have linemen that have played a lot last year. It’s a blessing and a curse, right. We’re leaving them in the same spot and developing a center, a backup center just because we know what Josh can do.”

On the run game: “Tonight it was evident, (Michael) Wiley has gained weight, he’s over 200 pounds. He’s running with substance. We all know he can catch, we all know what he can do. I think he’s done a nice job, has improved. The two young running backs, Frank Brown and Jalen John … Jalen is making yards. He’s really heavy-handed, he just makes yards. He’s explosive at the point of contact. The two young running backs, I think, in the first week have really kind of showed why we recruited them, why they’re here. That gives us a pretty good situation because (Nathan) Tilford, all he does is make yards, we all know that. He’s having a nice camp, he’s doing well. We all know what Gary (Brightwell) has got. So, running back-wise, I think we’re going to be fine there with our depth.”

On the receivers: “What we’ve got to do there is look to the perimeter for our receiving corps to kind of step that up. Stacey Marshall has had a good camp to help us in running game. We’re going to work a little bit more with a couple two-tight end sets next week because of what he’s done. And on the perimeter, from the guys who have come in, I think Dyelan (Miller) has had a nice camp, too. Those guys are pushing to play.”

On the backup quarterback competition: “They all got a shot tonight, they’ve all been getting shots all week. We’ve got a whole ‘nother week to shake that while thing out. They’re all getting reps. We’re rotating guys in, some with the ones, too. I’ve been pleased with their progress so far, and it’s good, healthy competition. We’ll let that play out for at least another week.”

On linebacker Derrion Clark: “Derrion, he’s a good football player. We’ve seen that when he was a freshman on special teams, he made a bunch of plays on kickoff cover. Obviously we trust him, when you put a guy on a punt team for punt protection. He’s been in big games, he makes decisions on the run, and it shows right now. He’s a guy that has got to be more consistent, that’s what’s kept him off the field completely, all the time, but with age and experience you see that coming. He’s seeing things a lot better. He’s going to be right in the mix, he’s going to play a lot.”

On Kwabena Watson’s development at linebacker: “Kwabena’s got talent. He’s outside, he’s more of a natural pass rusher. He was probably undersized when he got here, in the 190s. But the guy only lost two wrestling matches in his history. You know what kind of hands he’s got, you know what kind of flexibility he has, you know what kind of bend he has, he shows that. He’s bigger now, he’s just got to understand what he’s doing in space. If we just tell him, go sic’em, he’s good. But if somebody moves around, and we spread out the sets, he gets out there in space he’s a little bit lost, because that’s not what he did in high school.

“But there’s definitely room for him as a pass rusher, because he’s got tools and he’s getting better. He’s got great want-to, he’s got good ability. We’ve just got to get him in the right place. He’s an excellent pass rusher, it’s when we have to play in space and have to do some different things that create problems for him because of his size at the line of scrimmage to get off of those big ol’ tackles, 330 pounds. Coach (Paul) Rhoads and Coach (Andy) Buh are doing a great job, moving him around, getting him in space, trying to get him comfortable in that area where he can cover, at least zone drop some, and rush the passer also and then get him on some edges where he can be effective, instead of heads up against a big ol’ tackle.”