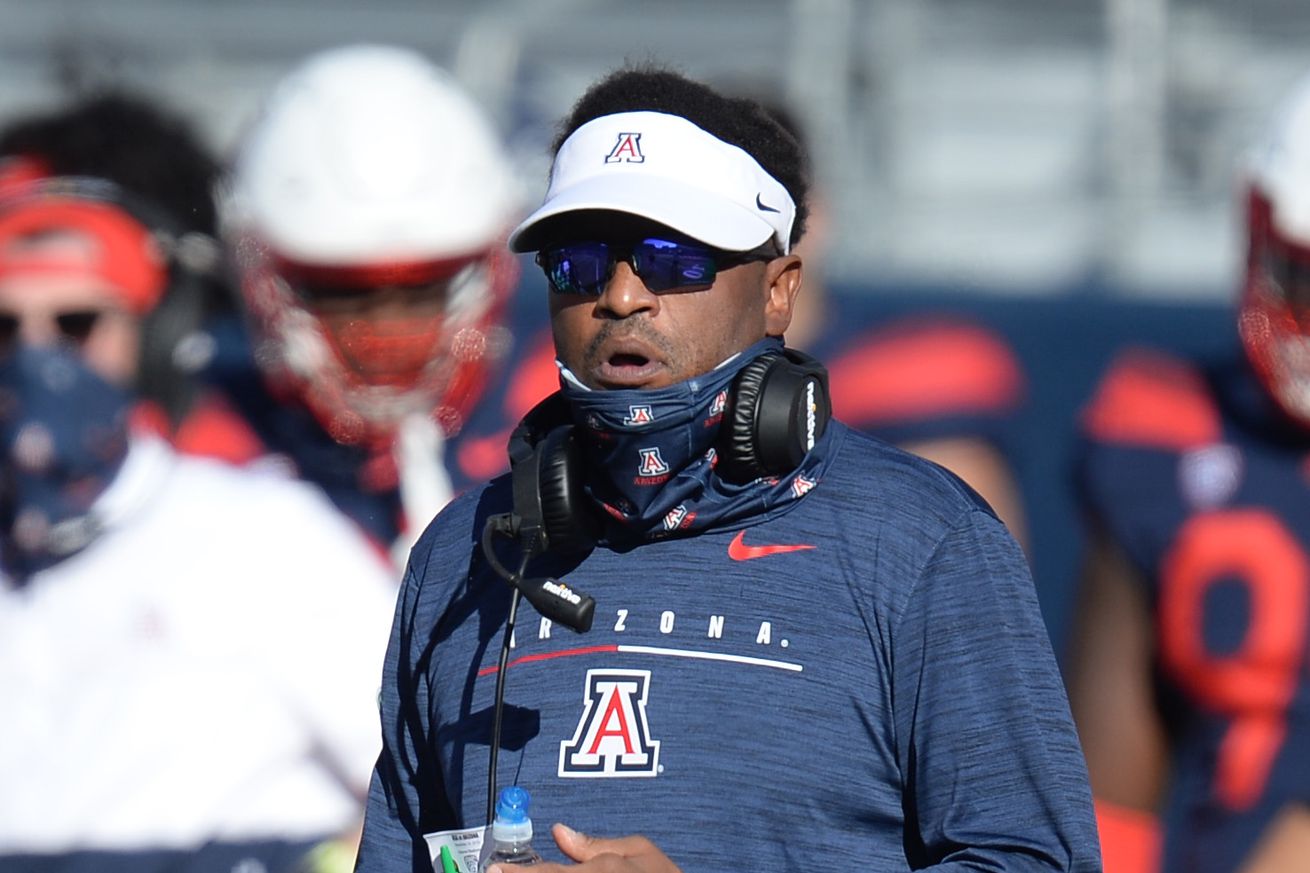 The Arizona Wildcats dropped a heartbreaker to USC 34-30 on Saturday to open the 2020 season. UA head coach Kevin Sumlin met with the media on Zoom afterward. Here’s the transcript along with video at the bottom. Player interviews can be watched HERE.

On what Arizona proved vs. USC: “I don’t know that we proved anything. I think that you either win or lose. But I thought we had some experienced guys that we expected to play well. We had some, obviously, some newcomers, whether they were transfers or young guys, that the played well, but not well enough to win and that’s the bottom line. As I told them in the locker room, our effort was great, was where it should be. I thought athletically we’ve improved in all three phases, but to close games like that, they come down to some situational football, some things that we can clean up, and we gotta to go back on Monday and fix those things. And those things are fixable, but athletically we’re better and I thought our guys gave effort. We gotta be smarter in some situations and to get over the hump because ultimately in those kind of close games, it comes down to making plays and doing your job and we have a couple breakdowns in that area, but that can be fixed.”

On the defense’s performance: “I thought in the first half, we did a good job. We only had three penalties in the first half, but they were three third down penalties, right? One questionable call and then some others that gave them first downs to keep some drives alive. But the rotation up front I thought has improved, particularly in the run defense. They started running some more stretch zone and it took us a while to get that shut down in the second half, but overall we’re better. One thing I would say is we didn’t force a turnover today. But that’s credit to USC, as well.”

On why Arizona’s defense was conservative on last drive: “Well, we were down a couple safeties. We had some mixups there, just because, number one, Jaxen Turner had left the game a couple of times and was out. Our safeties, we’re thin there anyway and we had a couple DBs that were out. So the ability to play man to man or a little tighter coverage right there with our second or thirds and some multiple deals with nickel (defense), we were a little bit out of that. So that was the position we were in and obviously USC took advantage of that.”

On why Arizona tried a hook-and-ladder on the final play instead of a Hail Mary: “You’re talking about throwing it 60 (yards). We had that discussion. Getting the ball up in the air 65 yards is one thing, but also protection and things like that. So we just felt like the rugby situation was our best opportunity to try to move the ball.”

On Lucas Havrisik making three straight field goals, including a go-ahead kick with 7:49 left, after missing a 42-yarder early in the second quarter: “Lucas has played a lot of football. He came back and made the last one from 51 to put us up, so he bounced back well. I thought the other piece was he’s a real weapon as a kickoff guy. I think every kick tonight was a touchback against really talented returners. I think that’s the unsung thing that he did tonight to keep those guys really to limit their their kickoff return ability and big playability by kicking the ball out of the endzone.

On Grant Gunnell’s performance: “I gotta go back and watch it. I know that sometimes we had some max protection situations with three-receiver routes…where he held it too long. I think that’s a learning experience for him too. They’re playing a little bit of two safeties over the top and playing man-to-man underneath and I thought he took advantage of that by running the ball, and putting it down and taking what the defense gave him.”

On Gunnell’s interception on the opening drive: “We talked about the first interception, and the first drive you want to start fast and that didn’t help, but he’s always going to take the blame because that’s the kind of guy he is as a quarterback. … He gave us a chance to win by making plays and taking off and running. We had some situations where there was some questionable activity with some hits to him, either in the head or just around all over the place. He’s a tough guy. I think he showed his mental toughness by bouncing back off the first interception and his physical toughness by putting it down and running. He’s always going to want to do some things better, win or lose, and he’s gonna be the first to be critical of himself and we just gotta go back and look at it and (figure out) what we can do better as a team as coaches to help him.”

On playing with only parents in attendance: “It’s kind of interesting. We practiced a couple weeks ago with the ambient noise. It’s just different when there’s not a lot of fans. I thought because of the lack of travel by our players back home and the ability to have their family, parents, wives or kids, whatever there, I thought that had some real significance to it because I could see guys when we came out even during warmups (had energy). You gotta realize these guys haven’t been home as part of COVID and lack of travel. Parents couldn’t come by the hotel last night or anything like that, so I feel bad for the Wildcat fans who can’t be here, but I thought there was some energy during warmups and during the game because of the families being there.”

On Gary Brightwell running for 112 yards on 21 carries and catching three passes for 20 yards: “I’ve been talking about Gary since we started practice. I don’t say training camp. We didn’t have one. We had fall practice. He’s had a great fall practice. I’ve said the last couple weeks I’m excited to see him play. Coach Steward talks to the running backs about the extra two yards and he moved the pile when there was nothing there. And when there was something there, he hit it.”

On backup running back Michael Wiley: “I can say the same thing about Michael Wiley as well. Those two guys played hard, I mean really hard, hung on to the ball in some pretty physical situations. He’s a guy that leaves it all out there, plays special teams. [Brightwell] and Wiley gave us a real one-two punch back there at running back today. You want to get [Brightwell] off the field some more but he wants to play and take advantage of opportunities. I thought he did that. Both those guys have the ability to catch the ball…so both those guys are doing a good job. I think you see what type of ability Gary Brightwell has to run the ball. He’s got top end speed, but he also can move the pile and we’re gonna need him to do that.”