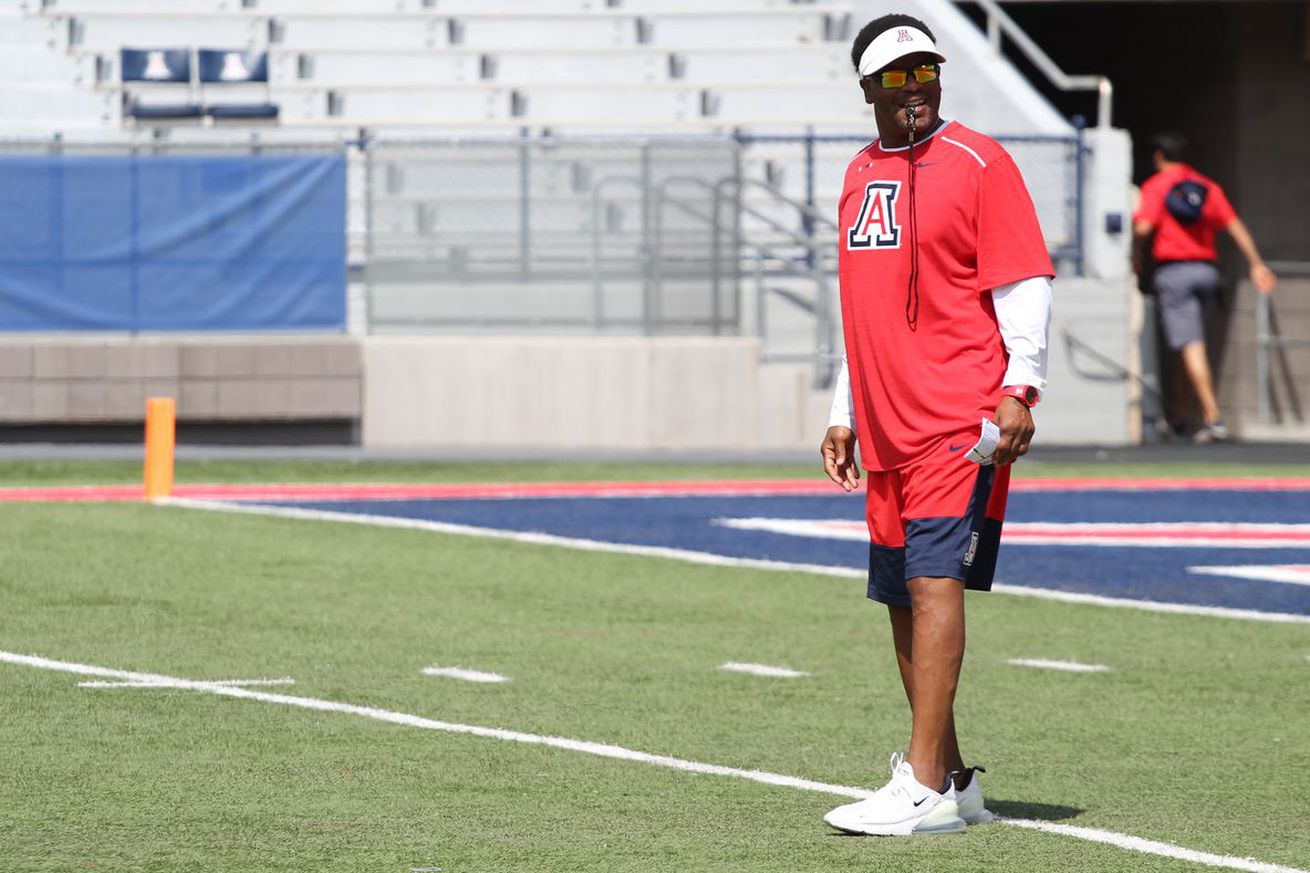 This is really happening.

Just over seven months to the day that it had its last official practice, the Arizona Wildcats return to the field in preparation for the 2020 football season. So what if the season isn’t starting until November and will consist of six or seven games, it’s still something!

Arizona got in four spring practices back in March before the coronavirus pandemic shut down college sports. The team has been conducting involuntary workouts since late June, only briefly taking a break after the Pac-12 initially canceled the 2020 season back in early August, but Friday marks the start of what in a normal year would be called training camp.

“We’ve gotten away from using the words training camp,” coach Kevin Sumlin said Wednesday. “There is no training camp because we’re in school. It’s a completely different schedule to play. Everything’s different.”

Include a potentially remote head coach on that list of “different” things for Arizona, as Sumlin is in isolation after testing positive for COVID-19 last week. He is asymptomatic and is hoping to get back to the team as soon as possible, but when that will be allowed is uncertain.

His return is one of several interesting things to keep an eye on with Arizona during the thing formerly known as training camp:

Arizona’s top three tacklers from last season are gone, but not gone from college football. Linebackers Tony Fields II and Colin Schooler and safety Scottie Young Jr. all transferred during the offseason, with Fields and Young now at West Virginia (though Young is not eligible to play) and Schooler is at Texas Tech.

A fourth multi-year starter on defense, DE/LB Kylan Wilborn, also entered the transfer portal but has yet to find a new destination.

Those departures leaves the UA with only 17 defensive players who appeared in a game in 2019, including just four at the linebacker position. Only senior Anthony Pandy and redshirt junior Jalen Harris have started.

New defensive coordinator Paul Rhoads said back in the spring the plan was for Arizona to use a 3-4 front, though that might not be as easy unless a few defensive linemen—redshirt freshman Eddie Siaumau-Sanitoa and redshirt sophomore Issaiah Johnson may be candidates for a switch—are cross-trained.

Depth is also an issue in the secondary, leading to the UA to list all cornerbacks and safeties as defensive backs on the online roster.

Bottom line: Arizona’s defense is going to be a question mark until we see what it looks like in a game. So it goes with so many changes in personnel and three new defensive coaches.

No position was more fluid for Arizona last season than wide receiver, where nine different players started at least one game yet only one reached double figures in starts. That was Cedric Peterson, the only member of that group that’s not back, so experience won’t be an issue.

Identifying which targets will be the main ones for quarterback Grant Gunnell, however, will be. Of Gunnell’s 101 completions last year, 64 went to returning wideouts with redshirt junior Brian Casteel the top recipient with 17 catches and two touchdowns. Redshirt sophomore Jamarye Joiner had 11, while senior Tayvian Cunningham and redshirt junior Drew Dixon had nine apiece.

Joiner led Arizona in receptions (34), yards (552) and TDs (five) in his first year at receiver after converting from QB last summer. He had surgery in May to repair a Jones fracture in his left foot but Sumlin said Wednesday the redshirt sophomore has “healed up pretty well.”

With the NCAA essentially saying that none of the 2020 season will count toward a player’s eligibility, there’s no concern about whether to burn a freshman’s redshirt. With that in mind, expect Arizona to play as many of its newcomers as possible at some point this season in order to see what they can do.

But which of those new guys will get used prominently?

Odds are most will appear on the defensive side of the ball, particularly in the front seven. Arizona signed six defensive linemen, including graduate transfers Aaron Blackwell (New Mexico) and Roy Lopez (New Mexico State). That duo should be in the mix up from along with freshmen Regen Terry and Dion Wilson.

Arizona also added six offensive linemen, with junior college transfer Sam Langi the most likely to get into the playing rotation.

Also keep an eye on true freshman quarterback Will Plummer, who will battle Rhett Rodriguez and the recently opted-back-in Kevin Doyle for the backup job.

More than anything, what Arizona will want most out of preseason practice is a string of consecutive practices without stopping. For that to happen, the team has to avoid the kind of COVID-19 outbreak that has hit dozens of teams throughout the country, most recently Baylor, which is “pausing football activities” due to positive tests that could put its next game on Oct. 17 in doubt.

The Pac-12 schedule, which begins Nov. 7, doesn’t include wiggle room for teams to push back games because of outbreaks.

Other than Sumlin, the only known positive case associated with Arizona football was that of redshirt freshman receiver Jaden Mitchell, who revealed in August he had COVID-19 earlier in the year. There was also the situation involving redshirt junior offensive lineman Edgar Burrola, who was suspended in late July for violating team COVID-19 protocols but is still with the program.