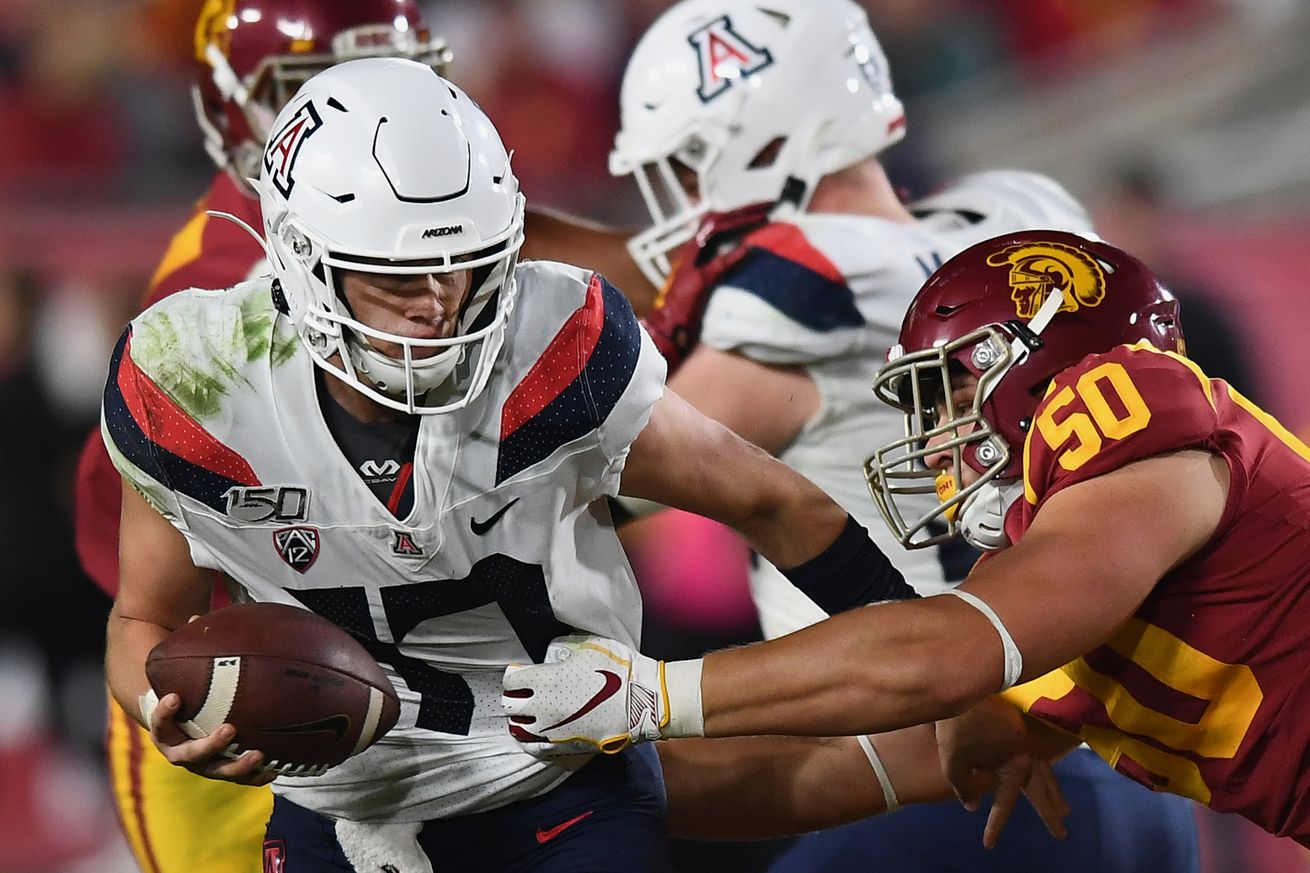 The Arizona Wildcats get a second chance at making a first impression when they host the USC Trojans on Saturday. The game will kick off at 1:30 p.m. at Arizona Stadium and be shown nationally on FOX.

This was supposed to be the UA’s second game of an abbreviated 2020 schedule until Utah had to cancel the opener last Friday due to a COVID-19 outbreak. That leaves the Wildcats with only five scheduled games, not including a potential sixth on Dec. 19 or a bowl invite if they have at least a .500 record.

Here’s what to be on the lookout for in Arizona’s long-awaited return to football:

Arizona began last Friday believing it was a little more than 24 hours away from opening the season, with a flight to Salt Lake City not far away, when it first got word from Utah about its COVID-19 situation and the possibility of cancellation. By lunchtime the game was canceled, and suddenly the Wildcats had another weekend free to watch football on TV.

Thanks but no thanks, coach Kevin Sumlin said earlier this week.

“We’ve been watching football for six weeks,” he said.

Instead of playing, Arizona instead worked out last Saturday at the request of its captains, while also taking in USC’s game against ASU. Then, after the normal Sunday off day the Wildcats began another “season-opening” game week that no doubt have to include some back-of-the-mind concerns about if this one would get played.

“We can’t focus on the past,” sophomore defensive lineman Kyon Barrs said, noting that he was “heartbroken” about the Utah cancellation. “We gotta move on.”

USC got those first-game jitters out of the way, while Arizona still has to experience them. Don’t be surprised if this leads to some early miscues for the rusty Wildcats.

Battle of the stud sophomore QBs

Grant Gunnell was ranked by 247Sports as the No. 15 pro-style quarterback in the 2019 recruiting class, while Kedon Slovis was 26th. The former was considered the future at Arizona before he ever got there, while Slovis was more or less an afterthought for a USC program that figured to be buoyed by JT Daniels for the next few years.

The reality was that duo combined to start 14 games as true freshmen, throwing for more than 4,700 yards and 39 touchdowns.

A great nugget from Arizona’s weekly game notes shows that Gunnell, who completed 65.2 percent of his passes in 2019, spent far more time throwing from behind than Slovis. Eighty percent of Gunnell’s 155 throws last year came with Arizona trailing, compared to 36.2 percent of Slovis’ 392 attempts.

Both Arizona and USC have new defensive coordinators, with Paul Rhoads in charge of a total overhaul of the UA defense that includes four new coaches and even more new starters, while veteran coordinator Todd Orlando made his debut with the Trojans a week ago.

Orlando is known for bringing constant pressure, which was shown against ASU, and though it only resulted in one sack the Trojans did limit ASU quarterback Jayden Daniels to a 47.8 percent completion rate.

How Rhoads’ defense will look? Other than going with a 3-4 front, everything else is pretty much a mystery. More than half the starting spots are likely be filled by players who are either new to the program or who have never started a college game, and depth issues at linebacker and safety could lead to walk-ons getting meaningful snaps.

Who will play (or will be unavailable)?

Compared to other teams, Arizona and USC seem to have navigated the pandemic quite well in terms of positive tests. Sumlin said the Wildcats have had positives in the past, but as of Monday they didn’t, while USC reported Monday it only had two positives across the entire athletic department.

However, as Sumlin made sure to point out during his weekly press conference, “that can change tomorrow.”

The Pac-12 requires testing on game days, so players available Friday might not be suited up on Saturday. That was the case with Stanford, which found out less than two hours before its opener at Oregon that starting QB Davis Mills had tested positive.

It’s unknown whether Arizona will identify players who are unavailable prior to the game, and for what reason, but if it’s anyone who was expected to start or play significantly and they’re not on the sidelines it would be fair to assume it’s COVID-related.

Streaks to speak of

Arizona brings a seven-game losing streak into this game, its longest since dropping eight in a row during the 2016 season.

The skid against USC is also seven, with Arizona’s last victory over the Trojans coming in 2012. Two of the three losses at home have been by one score.

The Wildcats will be trying to avoid starting 0-1 for the third consecutive season, which has never happened in program history.