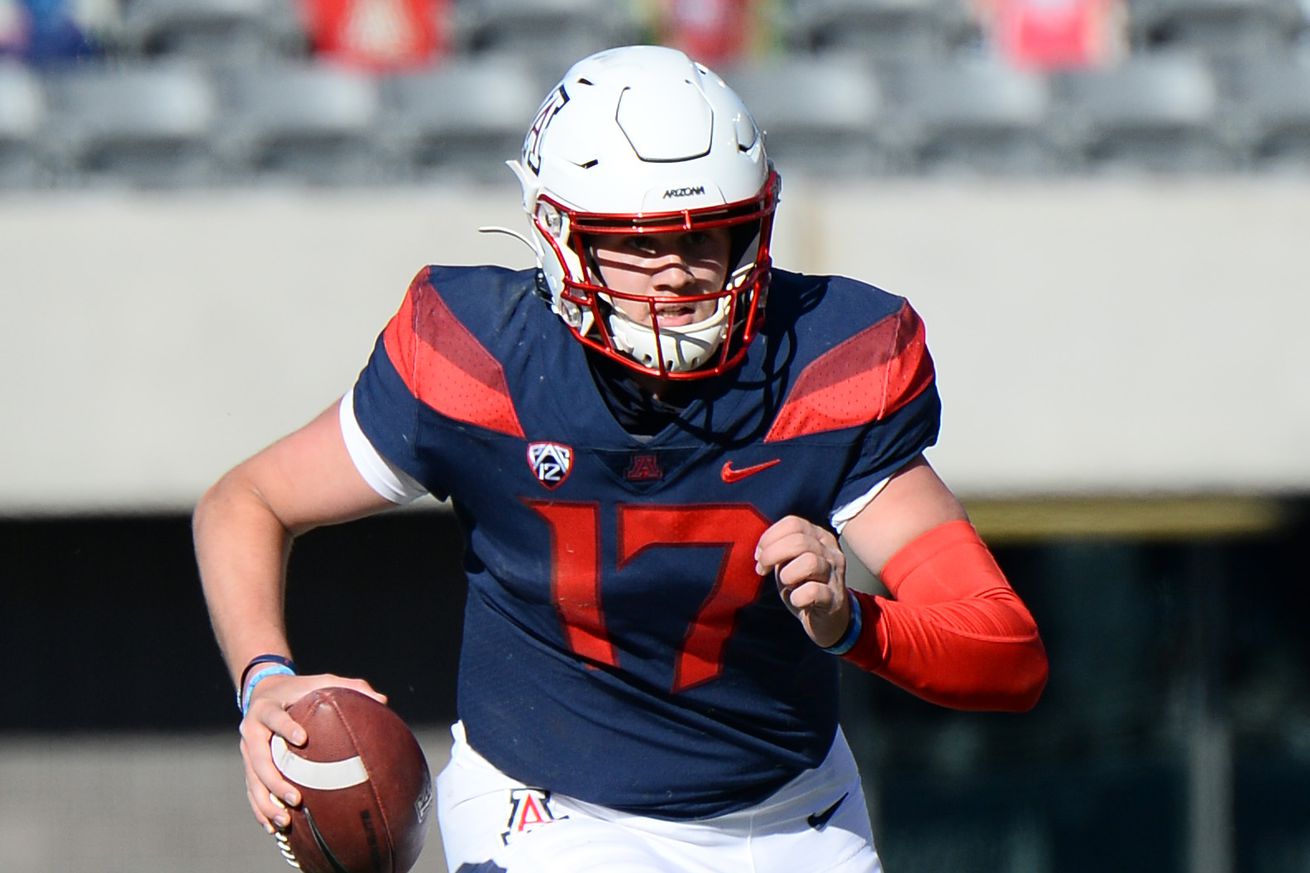 The Arizona Wildcats lost to the USC Trojans 34-30 on Saturday to open the 2020 season. Our full recap can be found here, player interviews can be watched here and a summary of Kevin Sumlin’s press conference can be seen here.

Below are some additional takeaways.

Expectations were extremely low for Arizona’s defense, which has perennially been one of the worst in the Pac-12 and lost several key players, but it made a statement in the first half when it held USC to 145 yards.

The Wildcats were stopping the run and generating a decent pass rush even if they didn’t have any sacks to show for it. They also dug deep in the red zone, holding USC to 20 points on its first six trips inside the 20.

Unfortunately, Arizona couldn’t sustain it. USC found the end zone in each of its final two drives, tallying a combined 150 yards on just 17 plays to escape with the win. The Trojans gained 353 yards in the second half, plus eight yards per carry and almost 10 yards per pass attempt.

“A lot of ups and downs,” Arizona linebacker Rourke Freeburg said. “I felt like in the first half we did a good job of minimizing the big play, tackling dudes, stopping the run. Getting off the field on third down, that was something we struggled with today and those are pretty much the four keys that Coach (Paul) Rhodes said we needed to do to win the game and I felt like we did a pretty good job of that until the second half.”

Sumlin was pleased with his team’s effort but said injuries in the secondary caused them to wear down and get conservative with their playcalling. That meant dropping eight defenders into coverage. It gave USC quarterback Kedon Slovis plenty of opportunities to find open receivers.

“The ability to play man to man or a little tighter coverage right there with our second or third (stringers) and some multiple deals with nickel (defense), we were a little bit out of that,” Sumlin said. “So that was the position we were in and obviously USC took advantage of that.”

Arizona players and coaches weren’t willing to accept a moral victory for hanging with a top-20 team, but Freeburg thinks the defense at least proved something.

“We’re not a laughingstock,” he said. “I feel like the last couple years our defense had not really performed to what we wanted it to and I think today with what we showed and Coach Rhoads scheme and the staff he’s put together has really honed in on knowing and understanding and defense. You had 11 to 20 something guys that got in the rotation today and that really showed that’s what it takes and I feel like while we gave up [34] points, at the same time we also made a lot of big plays and held a No. 20 ranked USC Trojan offense to 17 points in the first half and I think we can build off of that.”

Don’t let his scholarship status fool you, Rourke can play

Arizona is lacking serious depth at linebacker after Tony Fields II, Colin Schooler and Kylan Wilborn transferred, which meant Freeburg, a walk-on, got the nod at MIKE linebacker.

He was a difference maker. The Scottsdale native made one of the biggest plays of the game, bursting into the backfield for a tackle for loss on 4th and short at the Arizona 5, preventing USC from taking the lead late in the third quarter.

In the first quarter, Freeburg blew up a screen pass behind the line to force second and long. He finished with five tackles in his first-ever start.

“It’s funny because if you had told me two or three years ago that your senior year you’d be starting, I honestly would have been like, ‘yeah, you’re probably right,’” he said. “Just because that’s the mentality I show up with every day. I’m gonna work hard, I’m gonna earn that spot. But at the same time, you understand I’m a walk-on. There’s not a lot of walk-ons that are starting in the Pac-12 or really across the country.”

Grant Gunnell’s improvement was on display

The sophomore got off to an extremely shaky start, throwing an interception on the third play of the game. He badly overthrew Jamarye Joiner on a slant deep in Arizona territory and USC quickly turned it into a TD to put UA in an early 7-0 hole. That was just two plays after a tipped pass was nearly picked off. Maybe all the preseason hype wasn’t warranted?

Nonsense. Gunnell settled in from there, going 24 for 34 for 283 yards and three touchdowns the rest of the way.

He mostly completed short and intermediate throws across the middle or along the flat—and a few too many bubble screens that often yielded little yardage—but got a chance to flash his improved arm strength when he uncorked a 75-yard bomb to the speedy Tayvian Cunningham to tie the game at 20 in the third quarter.

Hard to throw a ball better than Grant Gunnell did on his 75-yard TD to Tayvian Cunningham. pic.twitter.com/hmurHXc5ZR

But really the most impressive—or at least the most unexpected—part of Gunnell’s game was his mobility. He rushed for 40 yards on the day, but actually 66 if you don’t include the 26 yards he lost on sacks. He never had more than 17 as a freshman.

Gunnell isn’t the fastest quarterback, but he sensed pressure well, was able to elude rushers, and showed a great feel for when to take off. He picked up five first downs with his legs alone.

He even went under center at one point, using his 6-foot-6 frame to sneak for a huge first down near midfield in the fourth quarter to set up Lucas Havrisik’s go-ahead field goal.

“They were playing a little bit of two safeties over the top and playing man-to-man underneath and I thought he took advantage of that by running the ball and putting it down and taking what the defense gave him,” Sumlin said.

Gunnell showed a lot of poise for a sophomore, too. He engineered an eight-play, 65-yard touchdown drive to give Arizona a 30-27 lead with 1:35 left in the fourth.

Four of his five completions on the drive were short tosses to Stanley Berryhill III, including an eight-yard bubble screen for the go-ahead score. The other completion was a crisp back-shoulder throw to freshman Majon Wright.

“I think he showed his mental toughness by bouncing back off the first interception, and his physical toughness by putting it down and running,” Sumlin said of Gunnell. “He’s always going to want to do some things better, win or lose, and he’s gonna be the first to be critical of himself and we just gotta go back and look at it and (figure out) what we can do better as a team as coaches to help him.”

Gunnell, who indeed took blame for the interception, thought he held the ball too long at times and should have been more willing to hit his checkdowns, but there’s a lot to build off heading into the Washington game.

“We’re optimistic and we’re driven right now,” he said. “We want to be great. We want to win games here. We’re not settling for losing ever. We’re tired of losing and we are going to bring some wins.”

For the first time in a long time, Arizona wasn’t overmatched in the trenches. Grad transfer defensive tackles Aaron Blackwell and Roy Lopez were disruptive, combining for 2.5 tackles for loss. They were a huge reason the Trojans only averaged 4.1 yards per carry in the first half and Slovis only completed 10 of 17 passes.

“The rotation up front I thought has improved, particularly in the run defense,” Sumlin said. “They started running some more stretch zone and it took us a while to get that shut down in the second half, but overall we’re better.”

Arizona was the worst punting team in the Pac-12 last season, averaging just 38.8 yards per kick. Tyler Loop, recruited as a placekicker, is proving to be a quick solution. The freshman punted three times for 136 yards, an average of 45.3 yards.

Sumlin said it was “the story of the game.”

“I thought that was an area that we had a concern coming into the game tonight and I thought he performed well in his first game as a punter,” he said.

With J.J. Taylor off to the NFL, Brightwell said in the preseason that it’s “go time” for him as he takes over as Arizona’s RB1.

“When [Taylor] was here, I was learning, I would learn from my mistakes,” he said. “I don’t really have no time for mistakes right now.”

Brightwell sure ran like someone with something to prove, carrying the ball 21 times for 112 yards, his fourth-highest rushing total of his career. He also caught three passes for 20 yards.

There was a drive in the third quarter in which Brightwell racked up 58 yards all by himself.

“You want to get him off the field some more but he wants to play and take advantage of opportunities,” Sumlin said. “I think you see what type of ability Gary Brightwell has to run the ball. He’s got top-end speed, but he also can move the pile and we’re gonna need him to do that.”

Arizona still has no luck

UA cornerback Christian Roland-Wallace almost leaped for a game-sealing interception on USC’s final drive, but Slovis’ pass deflected off his hands, right into the lap of a USC receiver for a first down at the 8-yard line.

The very next play Vavae Malepeai plunged in for the game-winning score.

Since this was Arizona’s first game during the coronavirus pandemic, I parked on 2nd Street just north of Hillenbrand Stadium and walked past the mall to check out the vibe on campus.

Normally it would have been packed with trucks and tailgaters, and I couldn’t help but think of how perfect the weather was for that—73 degrees, no clouds and a nice breeze.

Instead, the mall was eerily quiet, those long stretches of lawn almost completely vacant aside from a few people getting a workout in.

There wasn’t much traffic around the stadium, either.

Parents of players from both teams were making their way inside the stadium as the Arizona band rehearsed on Bear Down Field. By Pac-12 rule, they aren’t allowed in the stadium, so they performed there during the game and were streamed live on the videoboard. (I don’t really get the conference’s logic there. There was plenty of room for them to be placed somewhere inside the stadium in a physically-distant fashion.)

The parents were scattered in groups of four. Arizona’s were seated in the ZonaZoo. USC’s were along the north end zone. About 500 cardboard cutouts were spaced out in the first several rows of the south endzone, southeast corner and northeast corner.

The press box was limited capacity, with each reporter given enough room for two people and plexiglass separating each work station. The glass windows are nearly soundproof, so I couldn’t hear the artificial crowd noise. Apparently, it sounded pretty authentic.

“It was actually pretty cool to have the crowd sound playing on the surround sound, so I didn’t really see too much difference,” Gunnell said. “You could hear that sound but it was a little weird looking up and not seeing that many fans. It just kind of looked like a high school game.”

Still, Sumlin thought it was a big deal that parents were allowed to attend—and perhaps they were a catalyst for the defense’s surprising start.

“You gotta realize these guys haven’t been home as part of COVID and lack of travel,” he said. “Parents couldn’t come by the hotel last night or anything like that, so I feel bad for the Wildcat fans who can’t be here, but I thought there was some energy during warmups and during the game because of the families being there.”