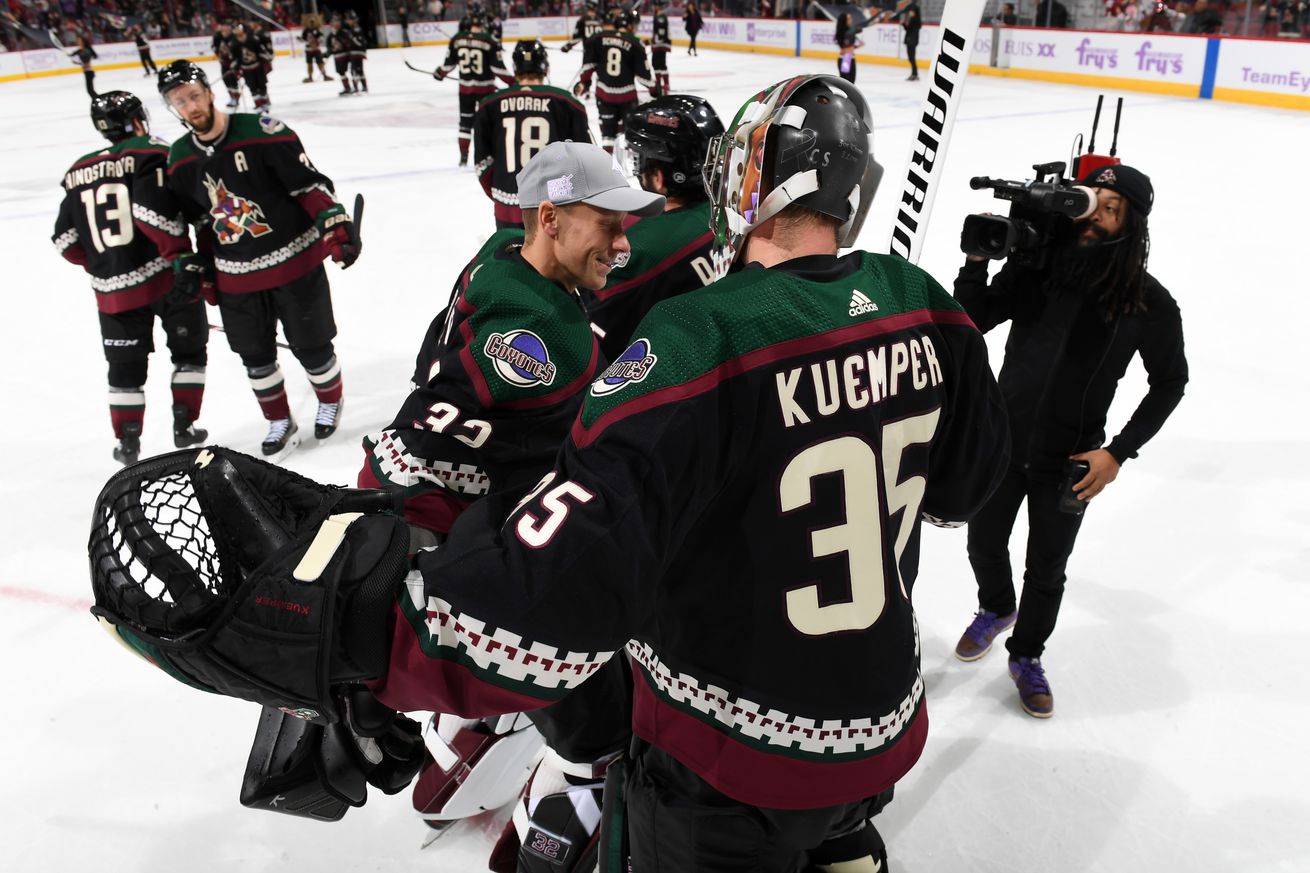 The first of what will hopefully be many roundtables as the Coyotes enter the postseason.

1. What do you think is the Coyotes’ biggest strength going into the playoffs?

Carl: I imagine that this matchup, like the Coyotes last playoff matchup against the Nashville Predators, will be a goaltending battle. While the Predators aren’t as reliant on Pekka Rinne as they were during the 2011-12 series, the Coyotes may be more reliant on their goaltending. Before the season was cut short the Coyotes were getting stellar goaltending from Darcy Kuemper and Antti Raanta, and they kept them in the season during stretches when the offense faded. Given how important things are in the playoffs I doubt that this will be changing much.

James: Without a doubt, it has to be the quality of their goaltending tandem. Darcy Kuemper and Antti Raanta posted over .920 save percentages each and, had they remained healthy throughout the regular season, the Coyotes may have held onto their spot atop the Pacific Division beyond Christmas. Rick Tocchet’s squad is one of the best defensive teams in the entire NHL, allowing the third-lowest amount of goals while also having a top-five penalty kill. With several injuries along the blueline, these stats are largely a result of the sturdy play from their guys between the pipes and if they hope to progress beyond the play-ins, that may largely depend on how quickly either of them can get settled.

Rose: No doubt goaltending is important but I think this team’s biggest strength is going to end up being team cohesion. Living in the bubble is going to be strange and weird for everyone but a team that can pull together, that can be a surrogate family to one another, will have the mental edge over other teams.

Brandon: I’m obviously adding a lot to this roundtable by also agreeing with goaltending. When healthy, both Kuemper and Raanta have been phenomenal over the last two years, which is something Nashville can’t say about their duo. Of course, the Coyotes goaltenders have been helped out by a pretty solid defense that doesn’t allow a lot of shots. That must irk Mike Smith to no end.

2. Do you think the Coyotes will re-sign Taylor Hall?

Carl: With the recent report of ownership meeting with Taylor Hall I think that the Coyotes are doing whatever it takes to get Hall to re-sign. Everything Hall has said to the press suggests that winning is extremely important for Hall, and I think the play-in round is going to be key to whether or not he wants to stay in the desert. If the Coyotes win the first round or keep things close I do think that will be a good sign of the Coyotes re-signing Hall. If they get swept or are otherwise embarrassed I don’t think money will be enough to re-sign the Coyotes.

James: The current climate puts the Coyotes in a strong position to at least tempt Taylor Hall to remain in the desert, with a flat cap over the next two years limiting the potential other destinations available to him, while his ‘down’ year also sees his current value relatively low compared to a year or two ago. If the team can perform well in the play-ins and playoffs, then they will have a real opportunity to show Hall what the team is capable of achieving. If they are knocked out of the play-ins, and especially if they don’t win the first-overall pick in the draft as a result, Hall will walk and head elsewhere. Hall appears happy in the desert, but his window for winning is getting smaller with each passing season. Reaching the playoffs proper just once in his career to date is a shockingly disappointing stat for a former Hart Trophy winner, so he will be determined to land somewhere that gives him the best chance of winning.

Rose: It sure would be nice if they were able to re-sign Hall. That’s also probably why it won’t happen, when has this team ever been able to have nice things? Between the reported lowball offer and front office drama I’d be surprised if Hall re-signed.

Brandon: I think that boils down to whether or not Hall looks at the market and decides that it would be in his best interest to sign a short-term deal until the market returns to normal. Earlier this year he said he was tired of short-term contracts, but he also didn’t see a pandemic wiping out the season and messing with everyone’s cap projections. I think ownership will make a strong push. After the Chayka fiasco, I think they’d like to make a positive headline this summer. But they’re also going to have to find buyers for some of our older players in a tight market. They may have to undersell on guys like Stepan and Goligoski to make it happen.

3. What is your prediction for the play-in round?

Carl: I predict the Coyotes will win in five games. I think it’s going to start close but by the fourth game, the Coyotes will pull ahead and win the round and officially end their playoff drought.

James: It is going to be a stressful series for both sets of fans, with all five games needed to decide the victor. I believe that a healthy Arizona Coyotes team can overcome Nashville and progress into the first round of the playoffs, but they will need to fire on all cylinders and get back to their form pre-Christmas.

Rose: Coyotes in three, mostly because I took off for the third game and want to see them clinch it.

Brandon: If Laviolette was still behind Nashville’s bench, I’d have picked them in five (despite their poor showings with him prior to his departure). Now I’ll flip and pick the Coyotes in five. John Hynes hasn’t had a ton of time to work with his team, so I think Tocchet’s familiarity with his team will be an asset. This is probably the only time I’ll ever give the Coyotes an edge in coaching.

4. Who do you predict will be the Coyotes’ playoff MVP?

Carl: The easy answer would be one of the Coyotes goaltenders, who will likely steal the show. But goaltending alone does not win games, someone is going to need to score, and Conor Garland seems like the ideal candidate to do something big and important. Mike Smith may have been key to the Coyotes winning their series against the Chicago Blackhawks, but Mikkel Boedker getting back-to-back overtime game-winning goals was key to that series.

James: It will depend on who steps up. Kuemper or Raanta are the easy ones to pick out, but players that struggled with injuries during the regular season, namely Niklas Hjalmarsson, captain Oliver Ekman-Larsson, and even Phil Kessel could step up and play to their potential. The Coyotes have a strong roster and there could be many players that step up and earn this title. Conor Garland has a chance after finishing as the team’s top goalscorer, but ultimately I believe it will be Taylor Hall as he can be the team’s true offensive spark and can lead the way for a team that has struggled offensively for the past few years.

Rose: I wish we had the exhibition game to base ridiculous judgments on but instead I’ll use camp scores. Clayton Keller is going to shine and prove his haters wrong.

Brandon: Aside from the goaltenders, I’m going to go with Conor Garland. His body may not be built for Playoff hockey, but his heart sure is. I’m also expecting Playoff veteran Carl Soderberg to continue on an impressive season and for Christian Dvorak to take this opportunity to establish himself as one of the league’s up-and-coming two-way centers.

5. Is there a dumb playoff bubble gimmick the NHL can do that you are excited about?

Carl: I’m not sure if it counts as a gimmick, but I like the idea of different camera angles. In general, I’m not a fan of some of the unique camera angles you see in arenas, especially the high, behind the net camera, but without having to worry about obscuring the fans’ view I think the NHL can find some unique ways to film the games. If the NHL does things right that we may see changes to arena design/hockey broadcasting.

James: I agree with Carl. I have seen footage of high angle cameras, which makes it much clearer of players’ positions on the ice and could add a different dimension to watching a game, especially for those that like to be armchair GMs or scouts/analysts, picking apart how the team is playing and individual players’ positioning. Outside of that, I’m just focused on the actual play on the ice.

Rose: Before this whole pandemic these playoffs were supposed to be the debut of the league’s new tracking system and include enhanced information for the broadcasts. That’s what I’m looking for and want to see.

Brandon: Hmm, what about situating some cameras in seats so we can see what it’s actually like to be at a game? Or have fans purchase seats/rows and they can win prizes if pucks end up landing in that section? Honorary mention to having the hosts of The Natural Hat Trick sing the national anthems.