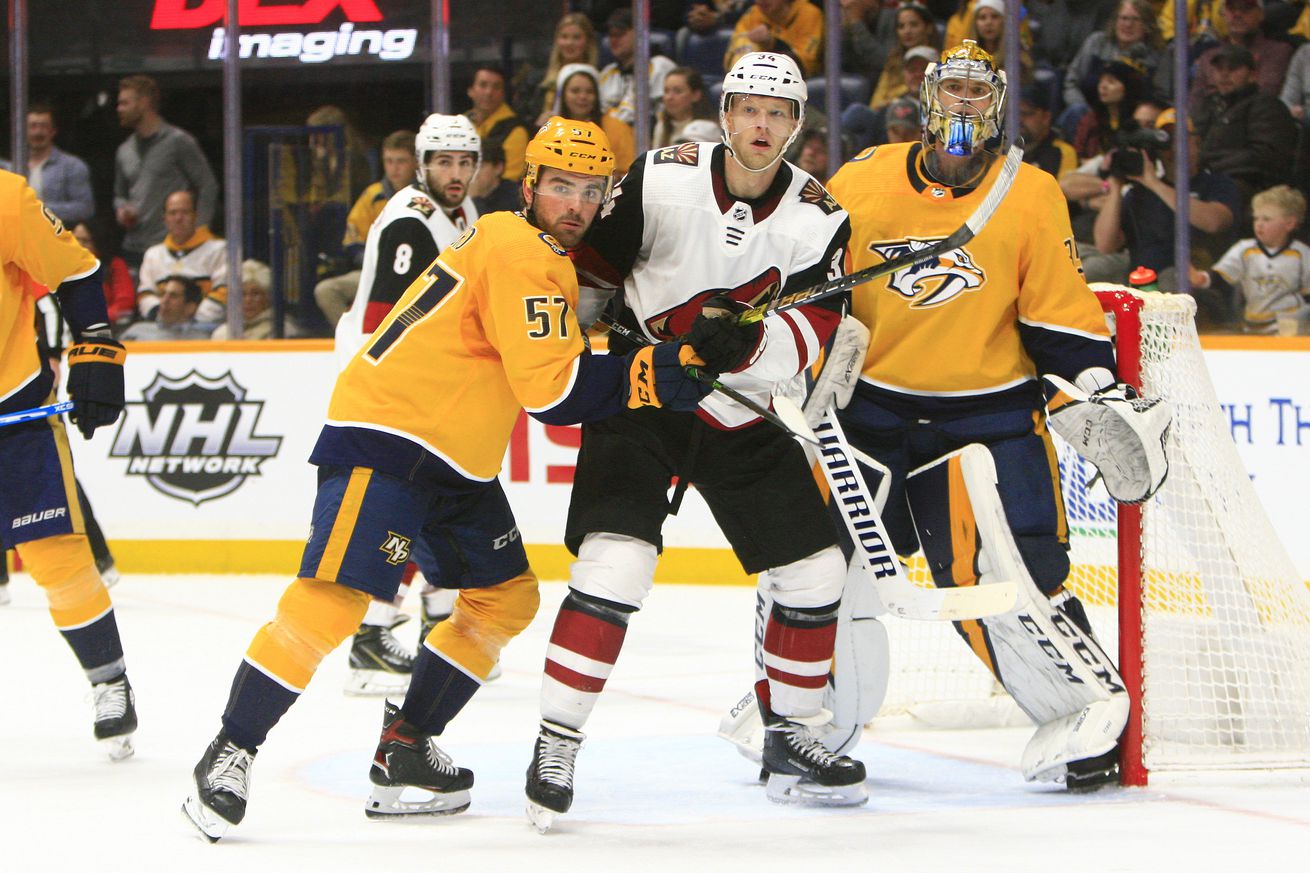 This morning the Arizona Coyotes face off against the Nashville Predators for the first time in their best-of-five series.

On Thursday the Arizona Coyotes returned to the ice for the first time since the NHL regular season was cut short by the global pandemic Covid-19. The Coyotes lost the exhibition game against the Vegas Golden Knights, but they will need to shake that out of their minds as they prepare for their best-of-five series against the Nashville Predators.

Arizona had a quick start against the Golden Knights but it lasted only a few minutes. Five minutes in the Coyotes lost control, and by the end of the first period, they were down 2-0 after allowing a short-handed and power play goal.

The Coyotes did turn things around in the third period. They got their lone goal of the game when Taylor Hall scored on the power play, and the third period was the first where the Coyotes outshot the Golden Knights.

Special teams and discipline would prove to be key in the Coyotes loss. Arizona took six penalties, far too many for a high offense team like the Golden Knights. Other than tempting fate, it also prevented the Coyotes from building any momentum, and it kept skilled players like Clayton Keller, Nick Schmaltz, and Phil Kessel on the bench for large stretches.

Unfortunately, the Coyotes would lose more than just a meaningless exhibition game. Schmaltz would take a high hit from Ryan Reaves in the second period and would miss the third period. This gave Barrett Hayton some time on ice, but the team is better if they have both Hayton and Schmaltz.

Unlike the Coyotes, Nashville handily won their game. The Predators shut out the Dallas Stars 2-0, with both goals coming from forward Viktor Arvidsson. The former 34-goal scoring forward shows that this Nashville team, unlike the one the Coyotes faced the last time they were in the postseason, has more offensive weapons.

In goal, the Predators have two solid goaltenders in Pekka Rinne and Juuse Saros. Rinne has gotten older, and Saros appears poised to take over as the role of 1a, but both are dangerous in net and the Coyotes will likely have trouble finding the back of the net.

Special teams are going to be key in this series. The Coyotes do not have an elite power play (ranked 18th during the regular season), but the Predators are tied for 24th in the league with a 17.3 percent success rating. While the Coyotes and Predators are relatively close with their power plays, the Predators’ penalty kill was 29th during the regular season, giving the Coyotes the edge in special teams.

Arizona: Taylor Hall – Hall had the Coyotes lone goal against the Golden Knights and he is going to be key for the Coyotes this series. The team needs its best players to play their best and Hall is one of their best.

Nashville: Roman Josi – The Predators have gotten a lot of offense from their defense, and this past season the Predators captain led the team in points. Josi had a point in the Predators 2-0 win over the Stars.

Tonight’s game in the Edmonton bubble begins at 11:00 am Arizona time. The game will air on NHL Network, Fox Sports Arizona Plus, and Fox Sports Tennessee and the radio on Fox Sports 910 AM.