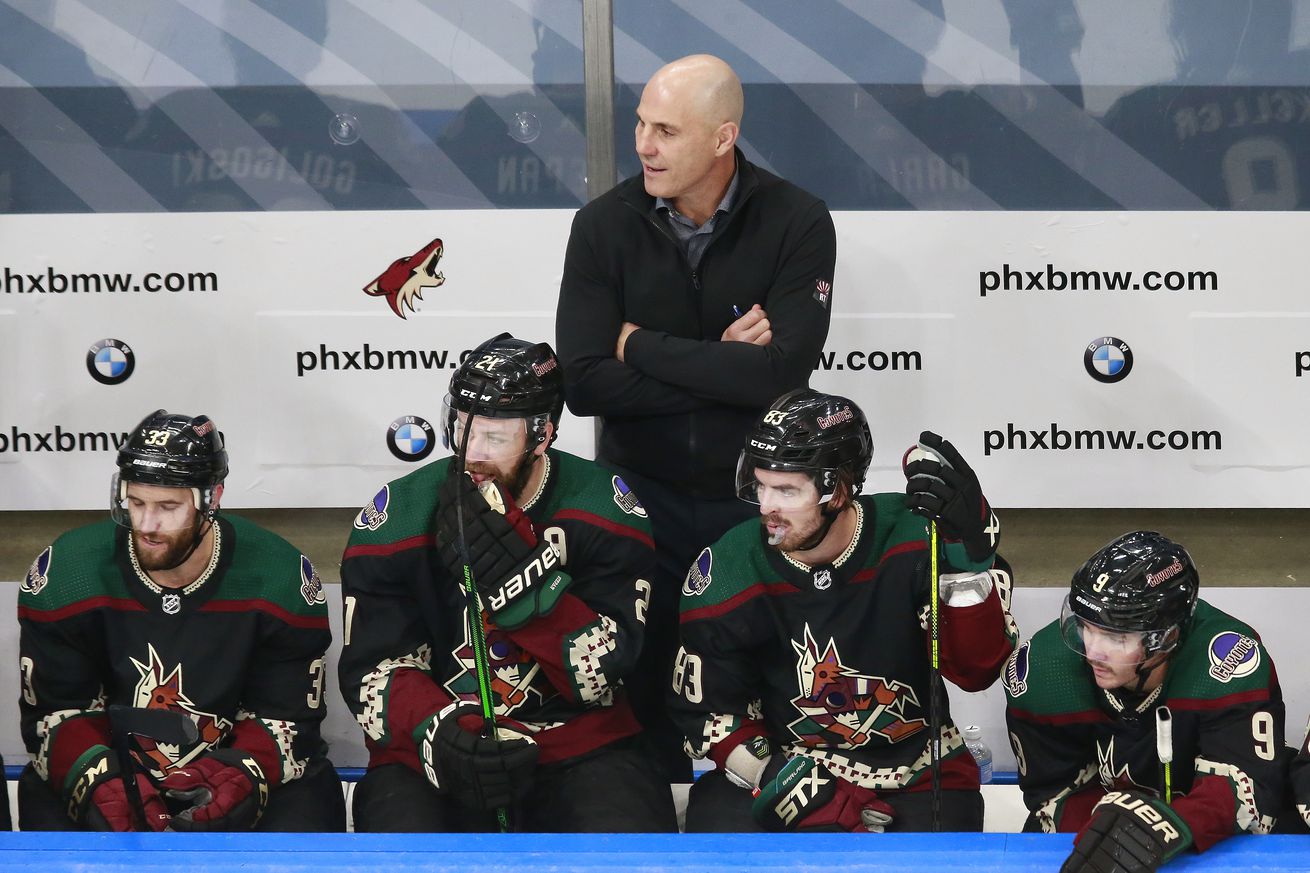 Tocchet is entering the final year of his contract in the desert.

Arizona Coyotes head coach Rick Tocchet is entering the final year of his contract with the team, but will he see his deal through to the end?

After three seasons as a head coach in the desert, Tocchet’s future is up in the air with a new general manager at the helm.

Bill Armstrong seems willing to work with Tocchet to build a roster with players that fit his overall system, with the additions of Johan Larsson and Tyler Pitlick in particular showing a new approach for the team.

There was even the possibility of captain Oliver Ekman-Larsson being traded away, something that may have been encouraged by Tocchet, who, allegedly, is seeking a different style of captain for the team.

All the early signs appear to put Tocchet in a fairly safe position heading into his contract year, but the reality of the sport could mean that the former Tampa Bay Lightning head coach doesn’t last until the end of the deal if performances do not improve.

Under Tocchet, the Coyotes have been a solid defensive team but have greatly struggled offensive – leading to some mixed results across his three years in charge.

This should portray Tocchet as a stabilizing presence for the Coyotes behind the bench, but the 2019/20 season could arguably be viewed as a disappointment considering the team’s extremely strong start and ultimate capitulation that only saw them make the post-season due to the expanded 24-team format.

Along with mixed results, the Coyotes seem to suffer an abnormally high number of injuries – losing key players for months at a time. This could be sheer bad luck, or it could be a result of Tocchet’s coaching style/system, with players looking to lack in conditioning across the season.

Add to that the fact that the Coyotes have brought in players who have been perennial top performers in the league and seemingly pulled them down to average, mid-six forwards, there must be concerns that the team’s system doesn’t suit the way the team is currently constructed and doesn’t allow the team to reach its full potential.

If this trend continues, and the Arizona Coyotes struggle in the early stages of Armstrong’s first season in charge, some tough decisions may need to be made – with his positive experiences in St. Louis, leading to a Stanley Cup championship, likely to give Armstrong a sense of what he expects from a team.

Tocchet being replaced mid-season might not spark a revival of the team’s fortunes if they are struggling early on, but it would allow Armstrong to look at bringing in a different style coach to see if it makes any significant impact on the team’s overall performances on the ice.

Players such as Phil Kessel and Ekman-Larsson have high offensive ceilings but seem to have struggled to get going under Tocchet, showing that there may be something wrong behind the bench that isn’t getting the best out of the players at his disposal.

On the flip side, if Armstrong’s recent additions to the team, ones that fit Tocchet’s style and system, get the Coyotes pushing for the playoffs again, we could potentially see him receive a contract extension, with more players brought in that play a physical, defensive style.

This season will be crucial for the Arizona Coyotes, not only because there will be high expectations for the players on the ice, but because it could cement Tocchet’s fate as a head coach in the NHL, or at least in the desert.