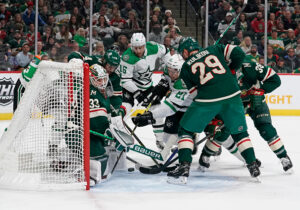 Welcome back to another day of NHL Predictions. Each day, Last Word on Hockey takes a look at the games that are happening and gives our predictions for each one, breaking down head-to-head and other factors that may play in. We also have a featured game of the day, which is considered must-watch TV. Today’s featured game is the Minnesota Wild vs Dallas Stars.

This game is arguably the most interesting of the day. Firstly, you have names like Connor McDavid and Leon Draisaitl taking the ice, enough to sell tickets right there. On top of that, you have a Predators team that has been quite good this season.

Both teams will be looking to go out on a high note in the final stretch, so this will undeniably be a tightly contested game. With Juuse Saros getting the start on Tuesday night, it is up in the air if he will be minding the net in this one. If Saros does get the nod, look for the Predators to pull out the win in this one.

This game is as equally unexciting as the previous game is exciting. Neither of these teams have been good this season, with both in the bottom 10 in the standings. On top of that, neither are playing particularly well as of late either. If Patrick Kane can force his way into a big night, that could be just enough to get Chicago the win.

Surprisingly enough, the Devils won the first meeting between these two teams this season. Despite that, no one expects a similar result in this one. The Devils have been nothing short of terrible this season and the Avalanche are one of the best teams in the league, winning their last six games in a row. Expect to see a big win from Colorado here on the back of Nathan MacKinnon.n
Prediction: Avalanche win 5-1

This game could prove to be a huge matchup for deciding the fate of the Golden Knights. They are but a few points adrift of the top three in the Pacific Divison and looking quite unlikely to make it into the playoffs via a Wild Card spot. Regardless of their motivations, this will not be an easy game for Vegas, as Calgary has been very good this season and is currently riding a five-game win streak.

The key to the Golden Knights getting a positive result in this one would be to slow down Johnny Gaudreau and Matthew Tkachuk. This is easier said than done, and Vegas will almost certainly not hit that goal.

This game is as close to being a formality as it can really get in a regular season game. The Coyotes have been mostly atrocious this season, with short spurts of decent play. As for the Canucks, since Bruce Boudreau took the reins, they have looked mostly good, competing well with the top three in the Pacific Division.

With such a large gap in the quality of the squads, expect Elias Pettersson and Bo Horvat to continue their respective hot streaks in a big Canucks win.

For the featured matchup of the day, we have the Minnesota Wild vs Dallas Stars. This is undoubtedly going to be a very exciting game, especially if the previous three meetings are any indication. Expect a flurry of goals from both teams.

The winner of the first three meetings between these two has scored either six or seven goals respectively, and this game should not be an exception. With how well Kirill Kaprizov and company have been playing this season, and with inconsistent goaltending for the Stars, this should prove to be a very big win for the Wild.