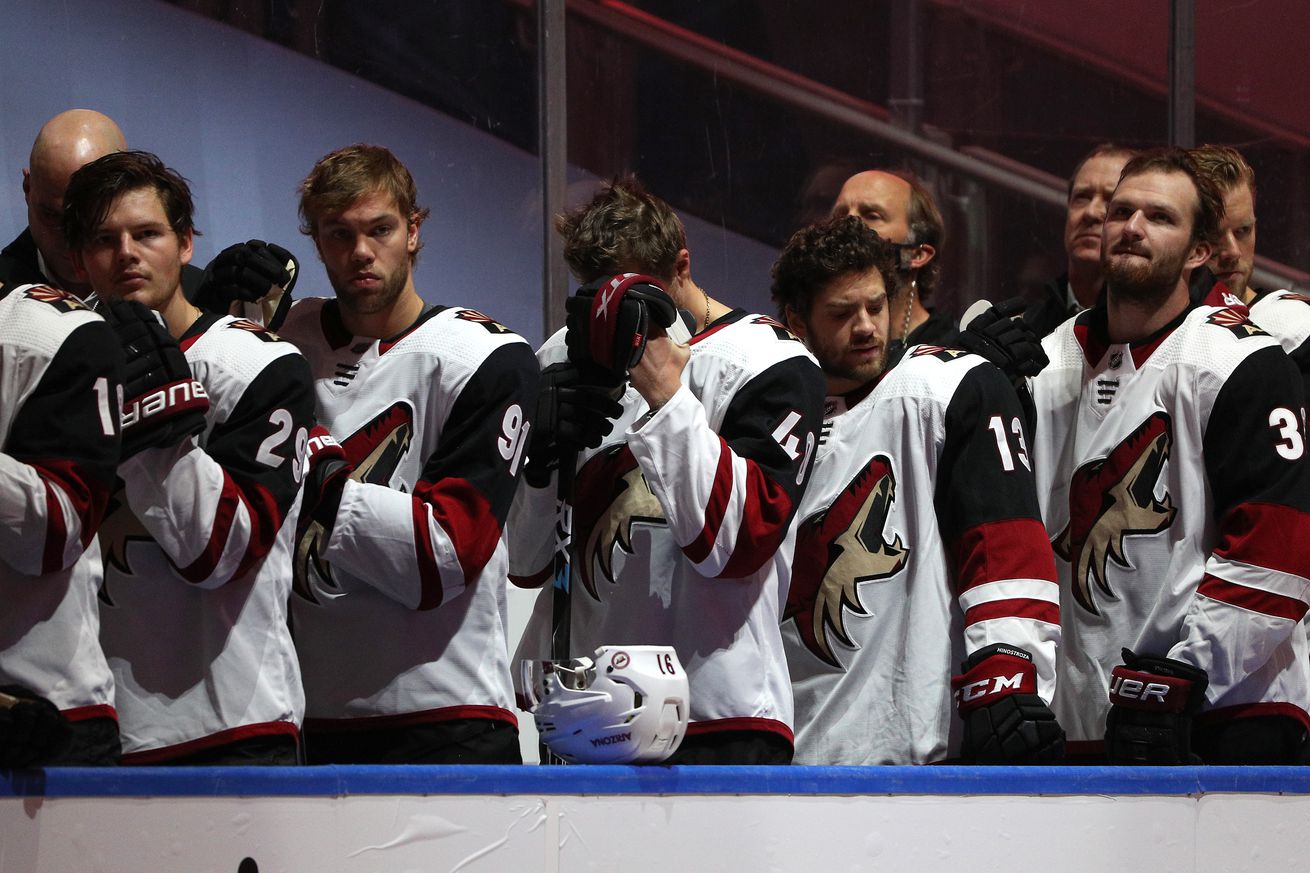 The hits have kept coming for the Coyotes and some significant changes may be on the way.

Changes are coming for the Arizona Coyotes, but how drastic should they be when it comes to their roster?

How quickly can feelings change around a sports team? When the Arizona Coyotes returned to training camp ahead of traveling to Edmonton to battle the Nashville Predators in the best-of-five qualifying round, things were great.

Positivity oozed from the fans and the team, finally fully healthy, looked ready and raring to go – hoping to end an eight-year wait for a playoff appearance, with the play-ins not officially recognized as such.

Then John Chayka happened. The splits between the team’s general manager and ownership was ugly, to say the least, and left a sour taste in the mouths of fans. Then there was the injury to Nick Schmaltz, which saw him miss the entire post-season run thanks to a high hit from Vegas Golden Knights forward Ryan Reaves.

Well, the team certainly made everyone feel that way with the hard-fought series victory over the Predators, halting their opponents’ run after four games thanks to the heroics of Darcy Kuemper and the resurgence of players such as Michael Grabner and Clayton Keller.

Things were back on track. Then Colorado happened. The less said about that the better as the team was completely deconstructed on the ice and suffered back-to-back embarrassing 7-1 losses on route to being knocked out in five games of the first round. No 2012 fairytale repeat was on the cards.

The fans were demoralized, having witnessed just how poorly their team was playing, but surely things wouldn’t get worse, right?

Losing a second and a first-round pick due to the draft combine policy breaches was like the scene in Serenity where Wash dies, truly shocking and emotionally draining all at the same time after what was arguably a defining moment of positivity.

This team has been through so much adversity over the years, but this summer just seems to have sapped so much positivity that was building, starting over a year ago when Phil Kessel was traded to the desert on the back of a strong showing in the regular-season despite overcoming a multitude of injury struggles.

Now, the team has no GM, no assistant coaches, no cap space, no high-value draft picks, and seemingly no real direction. So is it time for the organization to undergo a new rebuild that works to secure the long-term future of the team instead of focusing on another run at the playoffs next season?

The current financial climate of the world is forcing NHL teams to re-think their approach this off-season and potentially for the next few years, with a flat cap of $81.5 million expected to remain in place for at least the next two seasons.

After a season of spending to the cap, it appears that Coyotes ownership is keen to cut costs moving forward and, even if they didn’t, it’s something that needs to happen if the next general manager hopes to build a team with any hopes of competing.

At present, without taking LTIR into account, the Coyotes have just over $1 million in space and have six free agents to address this off-season – three of them with restricted rights and one being Taylor Hall.

This is largely due to Keller’s enormous pay rise, seeing him earn over $7 million a season until 2028.

While Keller still has a bright future with the team, there are a number of players on costly contracts that may no longer feature in the long-term picture, with reports already coming out about the likes of team captain Oliver Ekman-Larsson and now even starting goaltender Darcy Kuemper.

OEL makes sense due to his contract, earning $8.25 million a year until he turns 36, something that may not happen in the desert anymore.

Phil Kessel hasn’t lived up to expectations but this effectively ties him to the club thanks to his $6.8 million a season cap hit not coming off the books for another two seasons.

Players are aging, with the likes of Alex Goligoski (35) and Derek Stepan (30) no longer performing at the value of their contracts, leaving the team stuck with very little room to make moves unless players are offloaded.

The new general manager will be the person that determines the direction of the team, whether that be a retooling attempt to give the playoffs one last shot under Rick Tocchet or a decision that ultimately sees the roster gutted in exchange for assets and picks that can help a rebuild progress.

With rumors and reports circling that players are now available from the Coyotes, even before a new general manager is appointed, it appears that the decision may already be made and a future led by younger, fresher players could be the route that Alex Meruelo opts to guide the team towards.

Something needs to change for the Arizona Coyotes, who have been through a difficult summer and need some clarity on where the team will be even just a couple of months from now when the draft rolls around.