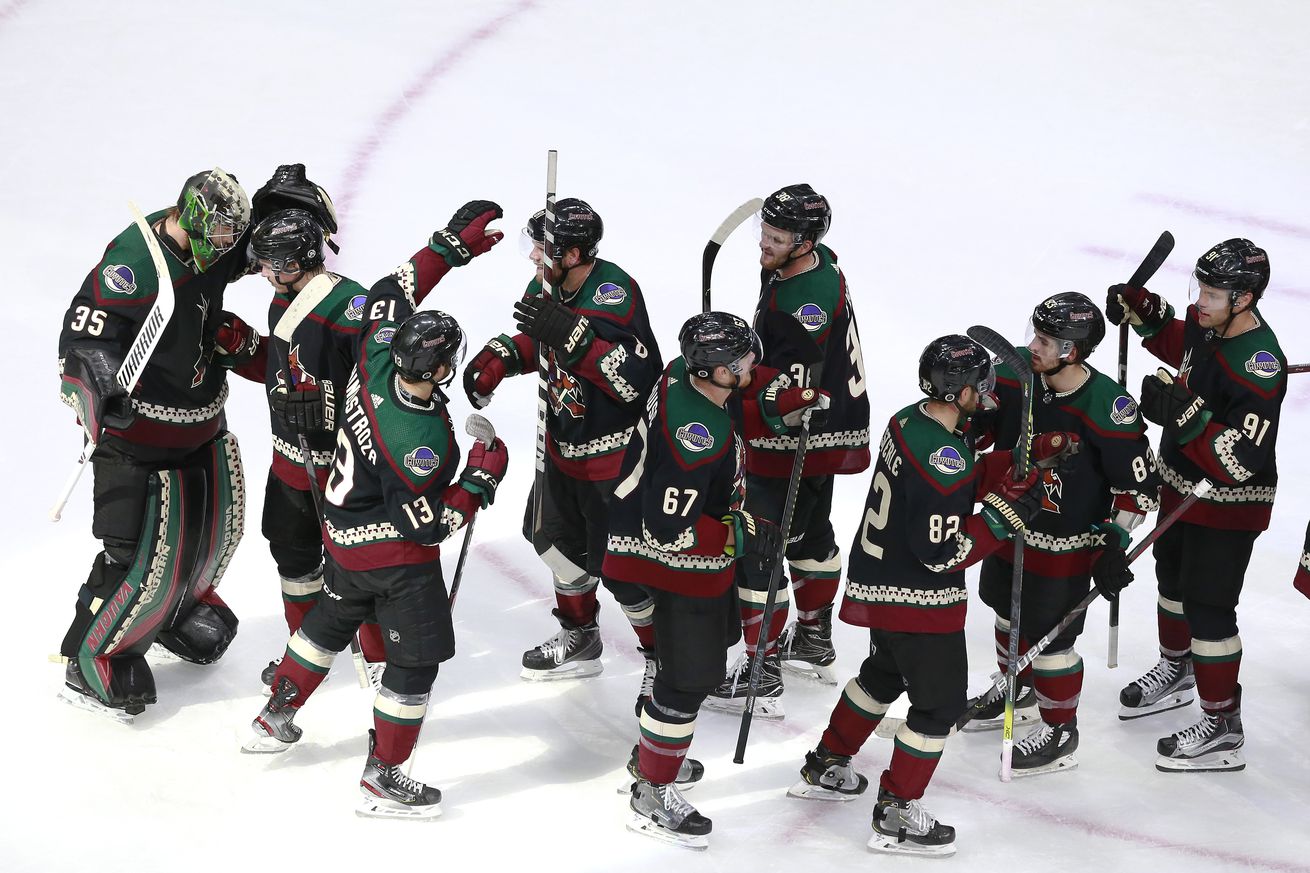 It’s been a tough summer to be a Coyotes fan. First, we surprised the hockey world with news of a nasty divorce between the franchise and its General Manager John Chayka, who had just signed a contract extension in November. Next, we got absolutely humiliated by the Colorado Avalanche in our first post-season appearance in eight years, including a pair of 7-1 losses that officially ended our brief playoff run.

Then the story broke that the league had decided on the penalty for the Coyotes’ Combine Testing Policy violations. While new owner Alex Meruelo had recently assured fans that the penalty would be minor, Commissioner Gary Bettman announced that the Coyotes would forfeit their second-round pick in the upcoming draft and their first-round pick in the 2021 NHL draft. This leaves the Coyotes without a pick until the fourth round in the upcoming draft and only one in the first three rounds of the 2021 draft (either a second-round pick if Taylor Hall does not re-sign or a third-rounder if he does).

But it’s not all doom and gloom. Despite interim-GM Steve Sullivan inheriting a team that underperformed while being pressed pretty tightly against the salary cap ceiling, there are lots of opportunities for the Coyotes to improve this offseason. Here, I take my shot as Armchair GM to see how I can improve the Coyotes’ fortunes.

For those who have seen my comments before, it should come as no surprise that the most important offseason move should be the firing of the coaching staff. Since taking over the Coyotes and beginning the season with a record-setting winless streak, Rick Tocchet and co. have failed to implement the forechecking-based offense that was sold to Coyotes management in Tocchet’s interview. That Carolina and Columbus—the latter even after the departures of Artemi Panarin, Matt Duchene, and Ryan Dzingel— were able to quickly and consistently employ this style of play in far less time than the still-learning Coyotes is cause for tremendous concern.

Further, the Phil Kessel acquisition was not the panacea to our offensive woes as hoped. Despite pairing Kessel with his Whisperer-in-coach, the 32-year-old managed only 14 goals and 38 points in 70 games, his worst season in 12 years. Other veterans that have been brought in, like Derek Stepan and Michael Grabner, have also underperformed while our young core hasn’t taken the next steps. The sudden removal of fan-favorite Scott Allen—who helped instill a top-ranked penalty kill—in favor of a more offensively-minded Phil Housley also crashed and burned, taking with it the strong penalty killing that was often our lone source of offense. Except for goaltending coach Corey Schwab, it is past the point where the Coyotes need to move on.

This has already started with the Coyotes announcing they will not be renewing the contracts for assistant coach John MacLean or long-time video coach Steve Peters.

Following the end of the Coyotes post-season, there were many calls for the trading of the team’s captain and highest-paid player, who has had several down seasons. A recent report from Elliott Friedman even suggests that this may be in the works, while Coyotes insider Craig Morgan has also explored the possibility that OEL would benefit from a change of scenery. With that in mind, it is not outlandish as Armchair GM to propose a trade of the captain. With a flat cap, there aren’t a lot of teams that can afford to take on the 29-year-old’s $8.25M cap hit, which necessitates that any deal involving OEL will likely involve taking back another similar-sized contract.

The most obvious trading partner in my mind is the Calgary Flames, who are rumored to be shopping either Sean Monahan or Johnny Gaudreau after a disappointing series loss to the Dallas Stars. Both have cap hits lower than OEL’s ($6.375M and $6.75M, respectively), but most importantly, the Flames are due for a revamping of their defense corps, with TJ Brodie, Travis Hamonic, Derek Forbort, Erik Gustafsson, and Michael Stone all on expiring deals. Adding OEL to the Flames’ top-4 alongside aging captain Mark Giordano, Noah Hanifin, and youngster Rasmus Andersson would set the Flames up for blueline success whenever Giordano begins to show his age.

Given the Coyotes’ need for a first-line center, Sean Monahan seems to be the most likely candidate for a trade-facilitated acquisition.

Speaking of centers, the 30-year old Stepan, once a shoo-in for 50 points per season, has slowed down considerably. After a 56-point debut with the Coyotes, the savvy two-way Stepan has lost a step with the Coyotes, tumbling to 28 points in the most recent, albeit shortened, season. Given his longstanding consistency, one has to believe that his recent decline has more to do with the coaching staff than his abilities. While his veteran presence would be missed, he does carry one of the highest cap hits on the team, with one more year remaining on his deal at $6.5M per, and with the hypothetical acquisition of Monahan, there are simply too many forward options on the roster.

One team that may be interested in Stepan—who may be able to be re-signed cheaply after two disappointing seasons—is the Blue Jackets. As noted before, they employ a tough, grinding game, which to date has been Stepan’s bread and butter. There is no doubt he would be a favorite of coach John Tortorella, and with the team possibly losing checking forward Brandon Dubinsky for good due to injury, replacing that much-needed two-way presence is undoubtedly an off-season priority for the Blue Jackets team.

The question now becomes what the Coyotes could ask for in return. With the Coyotes lacking grit, draft picks, and cap space, there are certainly lots of possibilities that could be entertained here. One that really piques my interest is Boone Jenner. Although no longer a 30-goal scorer, the 27-year old is usually good for 30 points and a consistent physical presence. His 30 hits (see a trend here?) this post-season would have put him second on the Coyotes roster behind Lawson Crouse, who was in the top-10 hitters this season. Watching the playoff series against the Tampa Bay Lightning, Jenner was an absolute force to be reckoned with, which will be needed if Carl Soderberg does not return, as Craig Morgan has suggested. That said, Jenner also had a down season. Paired with a second- or third-round draft pick, Jenner would give the Coyotes $2.75M worth of cap room this upcoming season while also replenishing the team’s bare draft cupboards.

Despite his moniker, “Phil the Thrill,” has had a love-hate relationship with fans, the media, and coaches. As noted above, his reunion with Tocchet was supposed to alleviate the latter, but his production took a tumble. Given his reputation and no-trade clause (he submits an 8-team list of acceptable trade destinations), this may be a bit of a tough move for the Coyotes, should they choose to part with Kessel. With no inside knowledge on which 8 destinations Phil has on his list, any possible trade would have to be to a team that would feasibly be one he would be willing to go to that would also be looking to add some offense.

One possibility may be the Florida Panthers. Warm weather and an unscrutinizing media would both be draws for the Panthers, who are expected to let 44 goals go this offseason when Mike Hoffman and Evgeni Dadonov hit free agency. Following their own disappointing loss in the qualifying round, the Panthers may be keen to add one of the top Playoff performers of the last decade, who brings with him two Stanley Cup rings. If they are interested, the question of return is an interesting one. Kessel has always been a buy-low candidate, so would a few draft picks make the most sense for the Coyotes, or would they push for soon-to-be 34-year old Keith Yandle to return to the desert to replace some of the lost blueline offense left by the departure of OEL (more on that later)? Doubting the Panthers’ desire to move one of their top puck-moving blueliners, I’d anticipate a second- and third-round pick (and/or a prospect) to be the best compensation we could get.

Despite praise from his coach on his work ethic and dedication, Keller seems to struggle to reach the next level that necessitates the big payday he is about to receive. While he’s only 22, the time may be ripe for the Coyotes to give Keller a change of scenery where he may be better able to live up to his contract. Before the qualifying round, it would have been difficult to envision a package for Keller, whose potential is still untapped, but also unknown. However, reports in early July that the Vancouver Canucks were looking to move Brock Boeser does raise some interesting possibilities. Boeser is only one year older than Keller, but has a pair of 50+ point seasons behind him (and was on pace to eclipse that this past season) and currently has 9 points in 12 playoff games. At a cap hit of $5.875M for another two seasons, his acquisition would save the Coyotes roughly $1.3M while giving them more long-term flexibility.

If the Canucks are willing to sell low on Boeser, this is a trade that has to be seriously considered by Coyotes management. The biggest caveat here is that the Canucks are looking to shed salary, not add, so the Coyotes may have to take back another contract to make this deal work, perhaps either Antoine Roussel or Jay Beagle’s $3M deals, both have two years remaining on their deals. With the former averaging about 12 minutes a night (and under 10 minutes a game during the Playoffs), he’s the likely candidate.

Sensational when he’s on the ice, but that’s the caveat. The oft-injured goaltender has found himself in a backup role with the Coyotes and has one season remaining on his contract, which carries a $4.25M cap hit. Unfortunately, the trade return on goaltenders if often quite low, so teams may be able to get a steal if they’re able to keep Raanta healthy. Even with one year left on his deal, acquiring a $4.25 million goalie who may not last the entirety of the season is a risky proposition, limiting the teams that may take the chance. One team that could afford to pull the trigger is the Detroit Red Wings, who may not have enough confidence to bring back 36-year old Jimmy Howard for another year or to rely on 32-year old Jonathan Bernier. With three picks in the second round of this year’s draft and six in the first three rounds combined, the Red Wings could make a competitive offer for Raanta’s services. Let’s be optimistic and say we get both a second- and a third-round pick.

So far, we’ve cleared about $13.95M extra in cap space fantasyland, and that’s without moving the often suggested Alex Goligoski and the remaining year of his $5.475M deal. Moving Raanta necessitates bringing up arbitration-eligible Adin Hill, who will likely cost around $1M per. This would leave the team roughly $20M under the cap ceiling (with three RFAs to sign) and with potentially five second- and third-round draft picks. Tough decisions lie ahead. Does the team pursue Torey Krug, who will likely cost an average of $8.5M per year? What about bringing in undervalued UFA Mark Borowiecki, who delivered 199 hits this year and blocked 120 shots, which outpaced all Coyotes in both categories this past season? Should the Coyotes continue their negotiations with Hall to shore up their wing? What about Hoffman? To help answer these questions, let’s look at the newly revamped roster, noting that I have not factored in the potential additions of Soderstrom, Capobianco, or Jenik:

Now it’s your turn. Where would you go from here? What is the Coyotes’ most glaring weakness? I’m retiring.