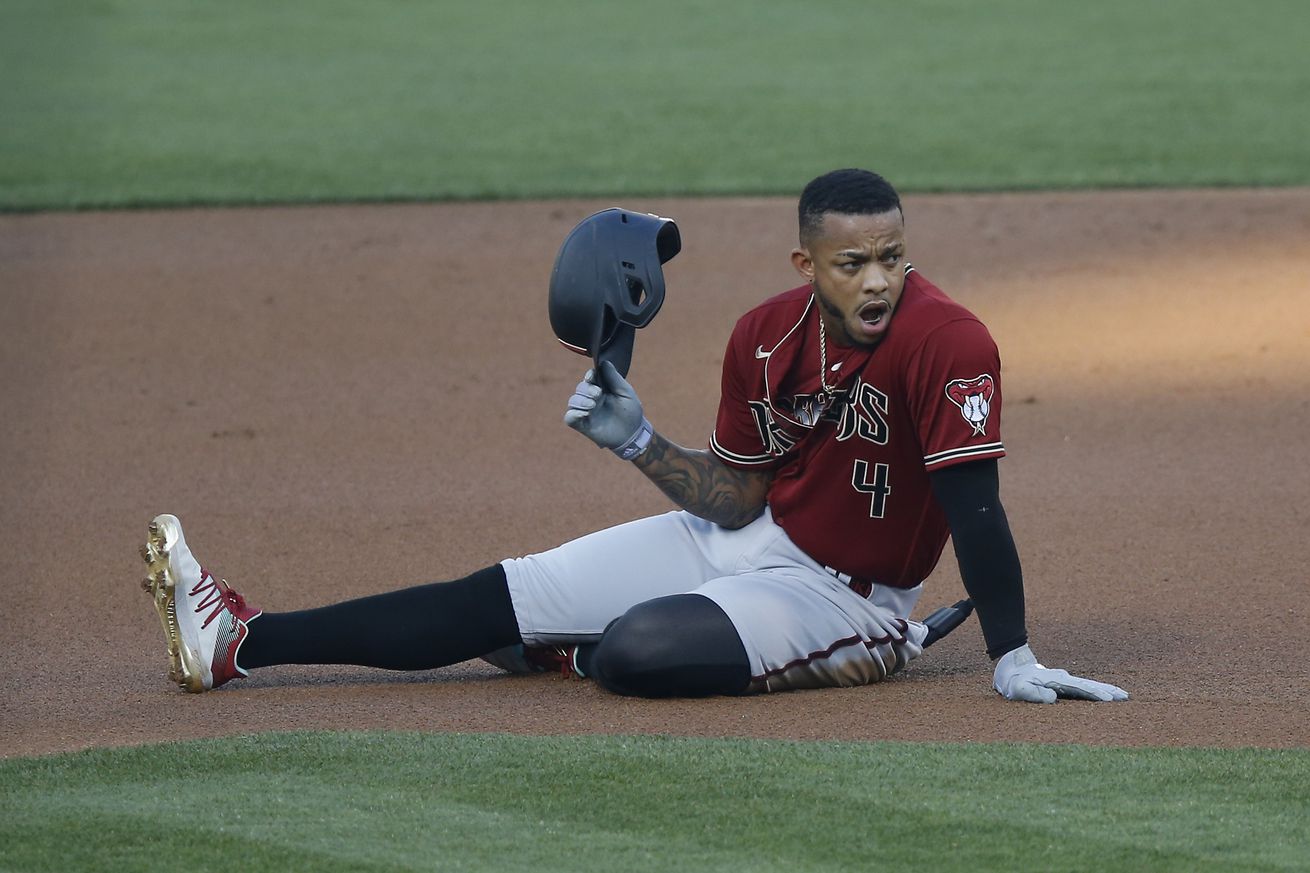 Right about this time last year I was writing to you from Milwaukee, Wisconsin, so with that being said…

So a couple weeks back a building caught fire at the Molson Coors factory in Golden, Colorado. Since then I’ve been unable to find Coors Banquet, and bros, lemme tell you I am not happy. It’s been 30 counts of PBR’s weekly since then, and tonight’s game added to that count. I was going to put it out into the universe about how excited I was to recap a Merrill Kelly start, buuuuuuut my superstitions got the best of me and I decided not to hoping I wouldn’t throw off his mojo. As if my feelings would have anything to do with his results on the mound. I assumed it would be a good evening considering the beat down Arizona put on Oakland yesterday with a less than ideal starting lineup.

Tim Locastro got the start for David Peralta today in left field, and if you watched the Brute Squad chat earlier this week, or know anything about my fandom, you’d know that I was fired up to watch him play today. Unfortunately, he struck out to begin the game preventing me the enjoyment of watching him be a terror on the bases until late in the game. Ketel Marte hit a line single to center field following his day off yesterday, but was quickly erased on a double play from Starling Marte.

So Turambar is adventurous and I’m a cheap plain Jane that likes to slam multiple light beers in a single inning. So what? Merrill Kelly struggled with his command in the early innings of this game. Perhaps it had something to do with the fact that MiLB umpire Malachi Moore was calling his first MLB game behind the plate (it didn’t). Kelly retired two of the first three batters he faced, allowing only a leadoff single to Marcus Semien, but loaded the bases by walking Matt Chapman and hitting Mark Canha (he’d make Kelly pay for that later on). Kelly tried to get too “cute” against Chapman after getting ahead in the count 0-2 and could not put him away. Robbie Grossman followed with a ground rule double into the right field corner to give the Athletics the quick two run lead.

I shouldn’t walk past the fact that one of the Oakland Athletics’ best young players, Jesus Lazardo, took the start for the Oakland Athletics. He is a very large and impressive 6’0”, 218 pounder, left handed twenty-two year old who was fairly filthy tonight. After dancing out of danger in the first with the double play, he ripped through the heart of the Diamondbacks lineup, Christian Walker, Eduardo Escobar, and Kole Calhoun, in the second inning with relative ease.

Merrill Kelly had only walked three batters total through three starts to begin the season, but a one out walk to Sean Murphy in the bottom of the second gave him two for this game already. By that point, it was evident he was going to have to labor a bit more in this start than his previous outings in the season. Fortunately, he stranded Murphy with consecutive strikeouts to Marcus Semien, and Ramon Laureno to conclude the bottom of the second

Nick Ahmed singled to left field to begin the third, his first of two hits on the evening, and was able to reach third with one out courtesy of a wild pitch and a balk. However, two pitches later he would be jogging back to his position on the field because Carson Kelly and Locastro failed to drive him in.

Yeah, I’m full on reminiscing about better times in Milwaukee at this point. My incredible beer bratwursts were on the menu tonight, and required much more of my attention than I could provide to this game in the coming moments. I truly believe that I could compete with the best of the bratwurst recipes in Milwaukee, but they have a drastically different style than I do. Pretzel buns are just a bizarre choice to me that they seem to be in love with there, as well as red and yellow bell peppers and red onions as opposed to yellow onions and green bell peppers. To each their own.

Oakland added to their tally in the bottom of the third with consecutive extra base hits. Matt Chapman doubled down the left field corner, and scored when Mark Canha earned retribution against Merrill Kelly for the earlier HBP with a two run home run that squeaked just over the left field wall. Oddly enough, this was seemingly the turning point for Kelly on the mound for he would only allow one other base runner for the remainder of the game. He struck out Robbie Grossman and Stephen Piscotty to end the third.

Dudes, believe me when I tell you that you’ve read all you need to know at this point. Big Brother was recording on the DVR, but you’ll be happy to know that I stuck to my duty and continued to watch the game with the hope that the D’backs would claw their way back into this one. That appeared to be the case in the top of the sixth inning where Locastro drew a leadoff walk and Ketel Marte followed with a single to center field, but the burst was quickly quashed with yet another Starling Marte double play.

The only Diamondbacks run came in the eighth inning courtesy of none other than Tim Locastro. He singled to left field leading off, and stole second base for his twenty-third consecutive successful attempt to begin his career. Using his unrivaled speed he advanced and scored on consecutive fly balls to center field, but a 4-to-1 defeat to Oakland was imminent.

No Sedona red comments. I’m tired. And buzzed. Let’s try to take 3 out of 4 from Oakland tomorrow.