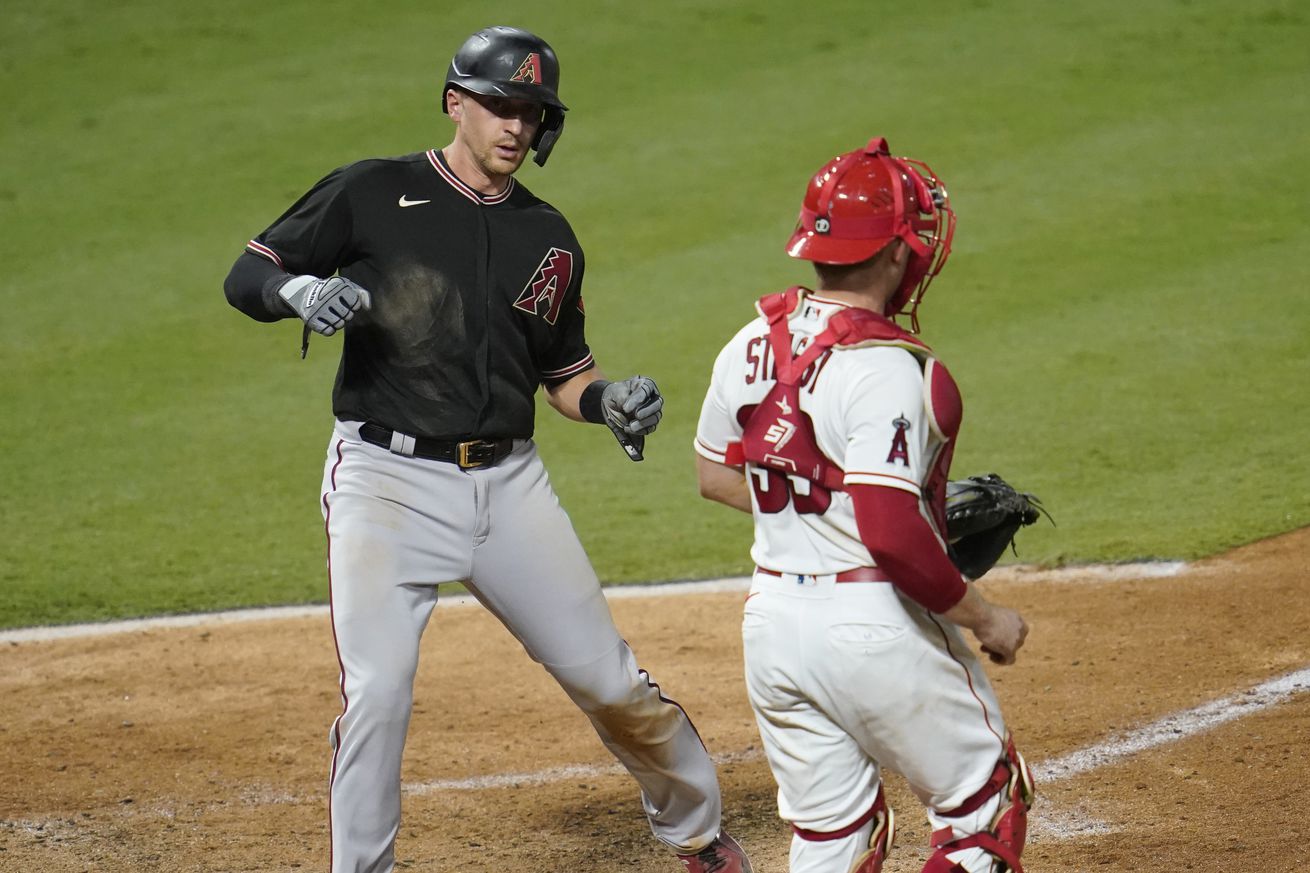 The pitching wasn’t great early on, but the Diamondbacks score nine runs for the second victory in a row.

This bizarre 2020 season is finally nearing a conclusion for the unexpectedly terrible Arizona Diamondbacks. The sooner the better if you ask me, but the first two innings of tonight’s game were anything but swift. Caleb Smith made his second start of the season for the Diamondbacks, and his opponent on the mound was the former phenom prospect Dylan Bundy. Bundy, a former first round draft pick in 2011, entered the game with a 2.48 ERA in nine starts, but would be knocked around tonight by the lowly Arizona offense.

Caleb Smith was on a pitch limit having missed six weeks of the season recovering from COVID_19, and burned through half of his allotment in the first inning alone. It took him 29 pitches to get through the first five batters of the Angels’ lineup, although he did so unscathed with no runs allowed. Smith gave up a one out single to Jared Walsh who has been the Angels’ best hitter of late followed by a full count walk to Mike Trout. Anthony Rendon and Albert Pujols failed to capitalize on the scoring opportunity with a fly out and strikeout, respectively.

Bundy cruised through the top of the first retiring the D’backs in order, but was dinked around in the second and needed 30 pitches to complete the inning. Arizona sent nine hitters to the plate and scored four runs. Kole Calhoun got it started with a single to right field. David Peralta scored him with his own single after a walk from Eduardo Escobar. Nick Ahmed found himself in an 0-2 count to follow, but hit a shallow single to left field scoring Escobar and Peralta. Stephen Vogt drove in Ahmed with yet another outfield single (death by a thousand cuts) , before Bundy retired the next three D’backs hitters to end the inning with a four run deficit.

By that point, we were approaching a game pace of 4.5 hours thanks to the lackluster pitching on both sides. The Angels’ half of the second inning of course began with a full count walk to Justin Upton which was particularly infuriating because he was down 0-2, and I feel that it is quite easy to get him to chase out of the zone. Smith paid for that mistake immediately on a two run home run from Max Stassi. Smith struck out Jo Adell, Andrelton Simmons, and Jared Walsh amidst a single from David Fletcher to end the inning. Now at 61 pitches through only two innings it was obvious to anyone with a pulse that Smith was done for the inning. Except Caleb Smith had a very animated opposition to the confirmation that his night was done from Torey Lovullo back in the dugout. He pleaded with Lovullo to remain in the game which is comical to me because… dude… we need to wrap this up. You’re done man. Just have a seat.

His opponent on the mound would be lifted in relief the next inning as well, so he should be comforted by that. Bundy quickly recorded the first two outs of the third, but consecutive singles from Peralta and Ahmed drove him from the game. Hoby Milner came on in mop up duty for the second evening in a row. He walked Stephen Vogt to load the bases. Daulton Varsho hit a grounder to David Fletcher in shallow right field which should have ended the inning, but he threw the ball away into foul territory allowing Peralta and Ahmed to score giving Arizona the 6-2 lead.

Taylor Clarke replaced Smith in the bottom of the first and was a refreshing gust of fresh air for the pace of the game. I’ve really been impressed with Clarke for most of this season. Despite his uncertain role, he has been effective in many situations just like tonight this year. He quickly carved through Trout, Rendon, and Pujols for Arizona’s first 1-2-3 inning of the evening. Angels’ reliever Patrick Sandoval kept up the pace striking out the D’backs in order in the fourth, and so now we were really cruising with the two relievers repeating this through the top of the fifth. That’s more like it.

Los Angeles came back within three runs in the bottom of the fifth when Jared Walsh hit his seventh home run of the season. Those seven dingers have come in his last ten games alone, so he is clearly feeling himself at the plate. Justin Upton added to that count in the bottom of the sixth with his own solo shot. I’ll still argue that J-Up has one of the most naturally beautiful power swings of this generation when he gets a hold of one. That’s now two in the last two games from him against Arizona.

The D’backs came right back in the top of the seventh with a power surge of their own. No longer satisfied with the small ball route, Christian Walker doubled to lead off the inning and was brought home on a massive center field shot from Kole Calhoun. David Peralta hit a first pitch dinger one out later giving Arizona the 9-4 lead. Taylor Clarke did give two runs back to the Angels in the bottom half of the frame, but Junior Guerra and Stefan Crichton hung on from there to secure the 9-to-6 D’backs victory.