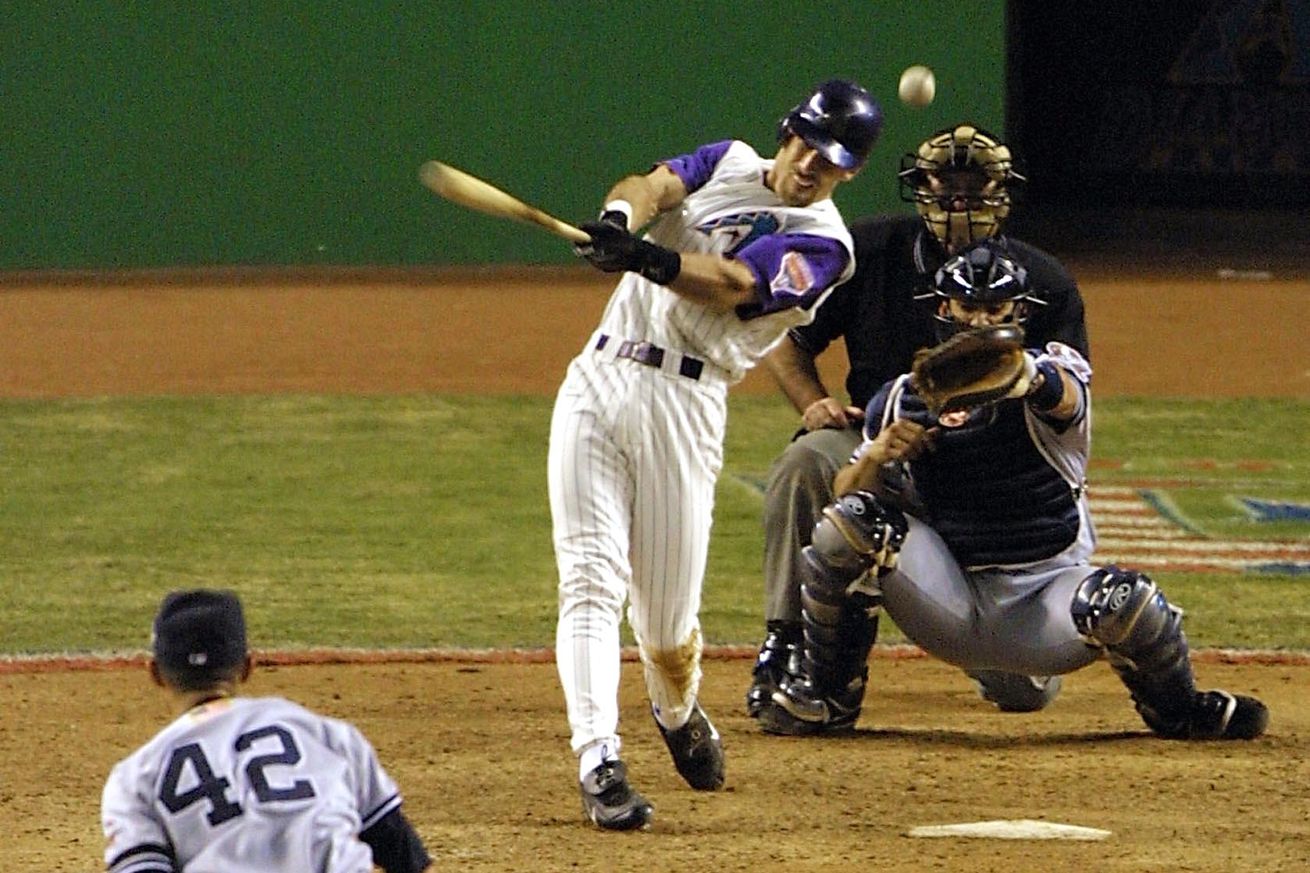 This is my most unsurprised face of all time.

It. Never. Gets. Old. I could watch the below clip a hundred times, and I still find myself getting completely invested, and in awe of what was achieved. Mariano Rivera is perhaps the greatest relief pitcher of all time. He appeared in the post-season sixteen times, and more men have walked on the moon that have tagged Rivera with an earned run in the playoffs, where his ERA was 0.70. Over his 47 save opportunities, only once did he allow more than a single run. It was that glorious night in November 2001, when the stars aligned. Mark Grace. Damian Miller, Jay Bell, Tony Womack, Craig Counsell and Luis Gonzalez all played their part in a moment we may well never experience again in our lifetime.

Below are a selection of SnakePit writers memories and thoughts about that glorious bottom of the ninth. Feel free to share your own in the comments!

Turambar: 2001 seems like a lifetime ago, and I guess it was, but I remember that night quite well. At the time I was working my first job as a bag boy at AJ’s and like most nights I was selected to close, which meant that (if I was lucky) I’d be able to catch the end of the game back home. Me and all my other fellow AJ’ians took various “bathroom breaks” throughout the game to listen on the radio in the manager’s office. To say that I actually worked hard that night would be a gross exaggeration. So I got my shift completed and booked it home, thankfully radar cameras had not become a thing just yet, and I was able to make it just as we got to the 9th inning.

What unfolded I still remember being almost surreal as it was miraculous. I walked in to the family room just after Grace led off the inning with a single, and I had a feeling that something special was about to happen. Womack kept that magic going as he drove in the tying run and then Gonzo made history. Honestly I was so certain at the time that he’d hit a homer, so to see that bloop single win one of the most memorable moments in my life was absurd and glorious in the same breath.

Makakilo: Looking back, what stands out are the two bunts in the ninth inning. They were both intended to be sacrifice bunts to advance the runners (although the first bunt did not make an out, and the second bunt did not advance the runners). Small-ball was an exciting way to win in the postseason and especially exciting in game seven of the series.

It appears that modern Sabermetrics theory is that win expectancy is reduced by bunts. In the last 8 years, the number of sacrifice bunts per game has fallen by about half (data from TeamRankings.com).

Jack: The only game I was able to attend live was game 2. I was at home with my family for game 7. I was pretty bummed out after Rivera came in the 8th inning, and really didn’t think they had much chance to come back against him. My middle son reprimanded me for being negative and not having faith ! But when Mo made the throwing error you just knew they were going to do it.

When Gonzo hit the walk off blooper we shouted, danced and yelled, but then I stood back quietly in the corner and watched my family celebrate. My wife especially. She’d been having a tough time with our transition to living in the USA. We moved from Taiwan during the 2000 season. While she had vacationed with me back in the states many times over the years, living here full time was quite different and there were a lot of challenges as you might imagine. But she grew to really enjoy baseball and going to DBacks games and watching the kids play too of course. As I watched her joyful celebration, I knew in that moment things would be ok. Baseball made the USA her home.

James: I watched game seven from the living room of my best friend’s house. I had an opportunity for a ticket to that game, but I would have been solo in a sea of people I did not know and it would have cost me the sort of money I simply could not justify spending. My spouse was still en route to coming home from the Navy, so it was just me, my best mate, and his mother. It was during the early part of the game that my spouse decided to call me and wanted to just have a nice idle chat. I tried as hard as I could to be supportive of the idea. Then there was the “almost triple” that I wound up watching through the window of the front room. I couldn’t contain my gameday excitement any longer and my fandom burst out. The call ended about 45 seconds later and I was back in front of the big television, drinking beers and losing my mind.

One of the few vivid memories I have of that night was that when GOnzo blooped that hit, we all started jumping up and down, wildly pumping our arms. Both my friend and I paused only for the briefest of moments as we looked up and realized we were a breath away from putting hands or heads through the spinning blades of the unforgiving ceiling fan. We both wound up bouncing sideways a bit so that we could resume the boisterous, unrestrained sort of celebrating that was exploding from our every pore.

When I think about that series now, I still wonder how such an unbalanced team found so much success. Outside of a few players, that team was a bunch of very average guys. The chemistry and composition of talents turned out to be a perfect fit. I don’t think it could be reproduced today. There were too many holes in that team that could be exploited today. Furthermore, even the biggest workhorses, like Justin Verlander, don’t put in the sort of innings that RJ and Schilling had to in order to get that team to the promised land.

[If you have two and three-quarter hours to spare, here’s the entire game!]

Jim: Many of you are likely familiar with this story, but what the heck. It never gets old, any more than the game! We were at Farrelli’s Cinema Supper Club, where we had watched Game 6’s blowout the previous night. As soon as it became clear there would be a Game 7, we went to the hostess stand and booked a table. I had decided I was going to propose to Mrs. SnakePit that night – but only if the D-backs won (we’d otherwise be too gloomy). After Danny Bautista doubled in Steve Finley to give Arizona a 1-0 lead, I started working mentally on my proposal speech. Then the Yankees rallied, first to tie it and then to take the lead, and it seemed engagement would have to wait for another day. But seeing Randy Johnson come in from the bullpen, I just felt something would happen, and never gave up hope.

Then the bottom of the ninth happened. Gonzo’s flare dropped softly to the outfield grass, and Farrelli’s exploded in riotous joy. I dropped to my knees, professed my undying love to the future Mrs. SnakePit, and said how the only thing that could make my life better would be if she would agree to be my wife. Her response? “Yes, great isn’t it!” Due to the racket around us, she hadn’t heard a single word of what I said. I had to propose all over again when things calmed down. I still reckon it was nowhere near as eloquent the second time around. But it was good enough to do the trick. She accepted, we got ice-cream on the way home to break the news to SnakePit Jr. and the SnakePitette.