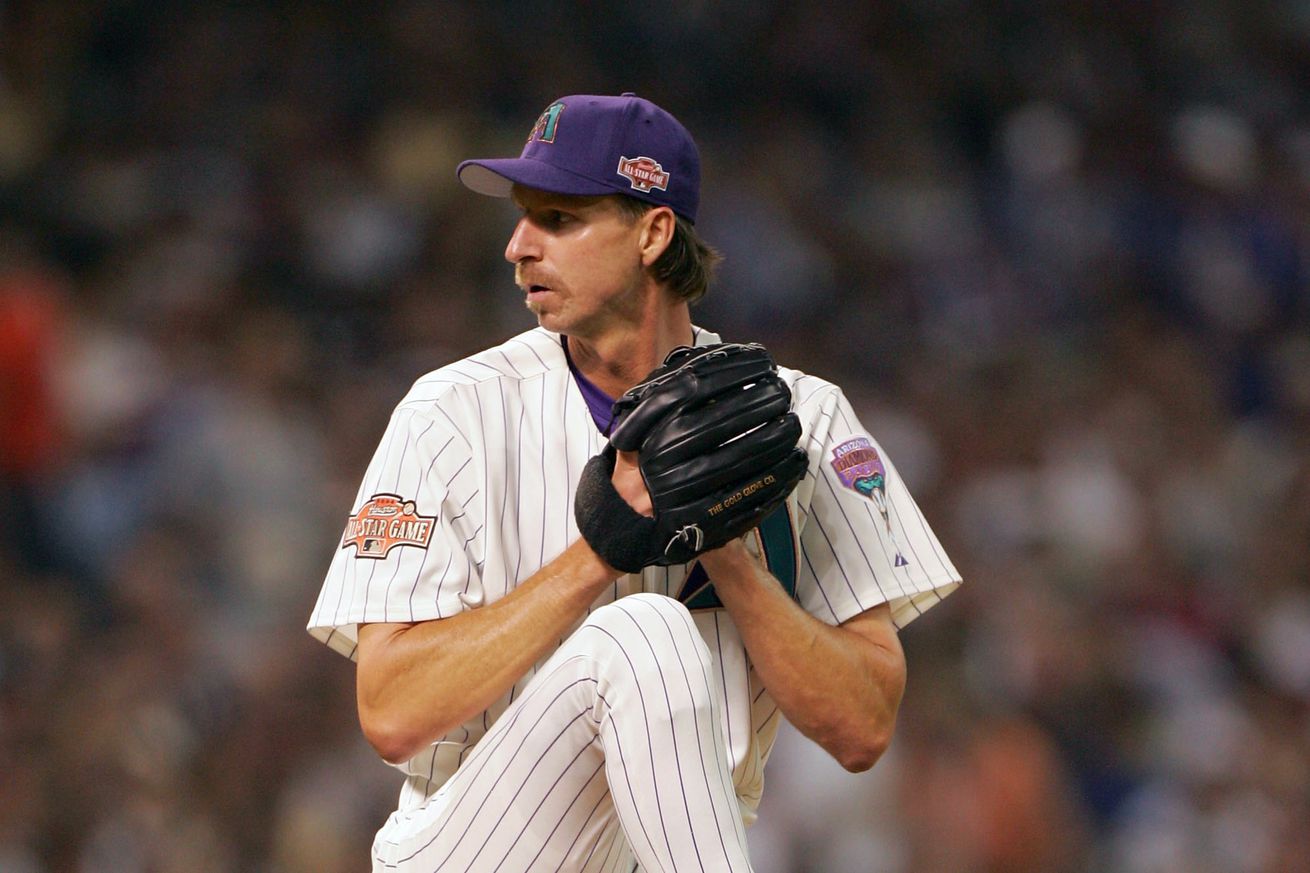 Randy Johnson had a career full of highlights on the way to the Hall of Fame, the best ones while an Arizona Diamondback. While his perfect game against Atlanta in 2004 is one that is hard to beat, and his performance in the 2001 World Series is one one for the ages, perhaps no game personified the essence of the Big Unit than May 8, 2001 against the Cincinnati Reds. For in that game he did what has only been done four other times in major league history: Strikeout 20 Batters in a 9 innings.

Randy was the ultimate power pitcher, with a high 90’s fastball and a wipeout slider that made right-handed batters dance out of the way (sometimes even as they swung) to avoid having their back foot broken. Left-handed batters to simply took the day off. Standing 6’ 10”, and releasing the ball seemingly half way between the mound and home plate, he was as intimidating as any pitcher who has played the game.

To help with the recall of this game, I was able to reach out to several key observers from that day, including Manager Bob Brenly, color analyst Jim Traber, (who I could talk to for hours !), Play by play announcer Thom Brenneman, and good friend MLB.com writer Steve Gilbert, who was doing Stats in the booth that night. Thanks to all of them for being gracious enough to help me with this article.

Asked what they saw early in the game and whether they had an inkling of what was to come:

BB: “I do remember that the Red’s had a somewhat undermanned lineup at that particular time in their history. They had a few good players in their lineup….Barry Larkin was still playing at that time, I think Sean Casey was on the bench. Aaron Boone was on that team. But surrounding those guys I believe Donnie Sadler lead off for them that day, I think Alex Ochoa was in the lineup. They had some holes in the lineup. But any time you faced Randy, there were holes in the other lineup!”

SG: “Every time he took the mound you might see something special. I don’t recall early on anything out of the ordinary just because it seemed like every night he was striking out double digits. It was around the 7ththat I began to think, man I wonder if he can make history”

(Note: This game was part of a streak of 7 straight games with double digit strikeouts, punching out 90 batters)

BB: “On that particular night my recollection is Randy’s fastball was just explosive. I mean it’s always good, but it just seemed that night it was coming out of his hand a little bit differently, it was getting on the hitters even a little more quickly than it usually did. The Radar gun may not bear that out but just the eye test……we were sitting on the bench and some of those Reds I mentioned were good fastball hitters, but he was throwing heaters right by em, and if anybody looked like they were getting close to catching up to the fastball, he’d drop that backfoot slider on em, and they just had no chance that night. An elite athlete on top of his game against an undermanned lineup…..we kind of expected this to happen every time Randy took the ball, but that particular night we actually got to witness it.”

For the first K of the game RJ caught Sadler looking. His next 8 strikeouts were all K’s swinging, including Barry Larkin twice. After Randy struck out the side swinging in the 4th, tallying 9 to that point, the Reds somehow scratched out a run in the top of the 5th. Aaron Boone singled, stole 2nd, and was singled home by Reuben Rivera.

The D-backs tied it up in the bottom of the 6th on an RBI single from Reggie Sanders driving in Steve Finely. That was it for the offense while Randy was still in the game.

As the strikeouts continued to pile up, and Randy struck out the side swinging again in the 7th, one got the sense that history was happening. The atmosphere in the ballpark became supercharged.

JT: “you just look over at the guy with you and ask is this really happening? Like I said the 2nd inning we knew it was impressive. Now, it could have been 13, it could have been 15, but then when you start to get to 16 and 18, wow, this is absurd. It was fun, it was special.

SG: “As you started to get into the late innings, you know the internet was not the same as it is now. We started looking around and our producer was firing through some record books we had in the booth, the guys in the truck are trying reach Elias Sports Bureau to find out what the records might be. It would be so much easier today with sites like Baseball-Reference.com and others. “

It’s notable that due to the fact that Randy came out of the game before it was over, and the game ended up going extra innings, Randy was not credited with officially tying the record.

Asked his most vivid recollection from that game, Thom Brenneman said:

“With the stuff Randy had on that night, two things stand out. That he ever gave up a hit and a run in that game, and that he didn’t WIN the game”.

HISTORY AND THE AFTERMATH

With 2 K’s in the 8th, bringing his total to 18, Randy needed two more to tie the record and three to break it. He got the first one, striking out pinch hitter Deion Sanders swinging. But the much maligned Sadler managed a ground out. Not to be deterred, Randy got Juan Castro swinging for his 20th and final strikeout of the game.

Punching the air with his fists and signaling to the sky an exultant Johnson spun and stroke off the mound to thunderous cheers. Asked about whether he ever thought of sending Randy back out for the 10th, Brenly was pretty animated in explaining why he chose not to do that:

BB: It’s wasn’t like we protected Randy. He wanted the ball. He was a physical specimen that could throw 140-150 pitches on a given night. There was no sign of him getting tired. He struck out 7 of the last 9 hitters he faced. He was just dominating. But throughout that entire 01 season we had an eye for the post season. We thought that was a team that was good enough to compete and win a World Series. We knew that we were going to ride Randy and Curt as far as the pitching staff goes. It’s a joke now (compared to modern workloads) but we tried to shorten them up whenever we could. But as you can imagine, especially when he’s on top of his game, that’s hard to do. Good God, he didn’t look tired. The Red’s certainly didn’t think he looked tired. It might have been a bad time on my part as a manager, but watching his body language, you know walking off the mound he pointed up to the heavens, and said a prayer, I told Mel (Bob Melvin) I think this outta be it, his spots coming up, he’s done everything he could here tonight. Let’s pull the plug here.

Mel said to me that’s not going to be a popular decision in the ballpark tonight.

As you can imagine everybody kinda got involved. You could see that K meter in right-field was wrapping all the way around the right field corner, so I don’t think the fans were too happy with it but our concern was getting to the post season. We felt if we could save Randy 15 or 20 pitches in that game those are 15 or 20 pitches he could throw in the 9th inning of game 7 of the World Series.

For his part, Randy was on the same page,

The D-backs went on to win the game in a wild 11th innings. The pen gave up 2 in the top half, but Reds reliever allowed 3 hits, 3 walks, and 3 runs in the bottom half to give the D-backs the victory. The winning run scored on a Matt Williams walk off walk. But that is a footnote to this game ultimately.

For your viewing pleasure, here is a video with all 20K’s. Other than RJ passing Bob Gibson that night on the all time K list, see if you notice something that I picked up on:

List of 20 K games with Date/Link to box score

While researching for this article I came across something I found interesting. You didn’t really think you were going to get off that easy and not have to wade through some stats and a chart or two, did you ?

18 of RJ’s 20 K’s were K’s swinging. He caught Sadler looking in the 1st, and Pokey Reese in the 8th. Every other K was swinging. He wasn’t depending on the umpire to help him out in this game. I was curious to see how that compared with the other 20K games. In fact, this is the most K’s swinging by a pitcher of ANY 9 inning game all time. (I checked the 19 K games too, and all had at least 2 K’s looking, so nobody else more than 17K swinging.)

This isn’t to take anything away from the other outstanding performances. But the essence of Randy Johnson was overpowering swing and miss stuff. He didn’t deceive you. He bullied you with heat, with life threatening movement, and half the time the swings were for self protection. I’ll end this with one more quote from Jimmy T:

JT: He’s one of those guys that you better go up there swinging the bat. When I faced him in AAA he had no idea where the ball was going. Which made him even harder to hit against. But by the time he was pitching for the Diamondbacks he knew where it was going. But I’m telling you something man, when he was on and he knew it, and you could see it in his face………

The reason why he had so many swinging K’s is because people knew…I’m not going to take, I gotta get up there and hack.