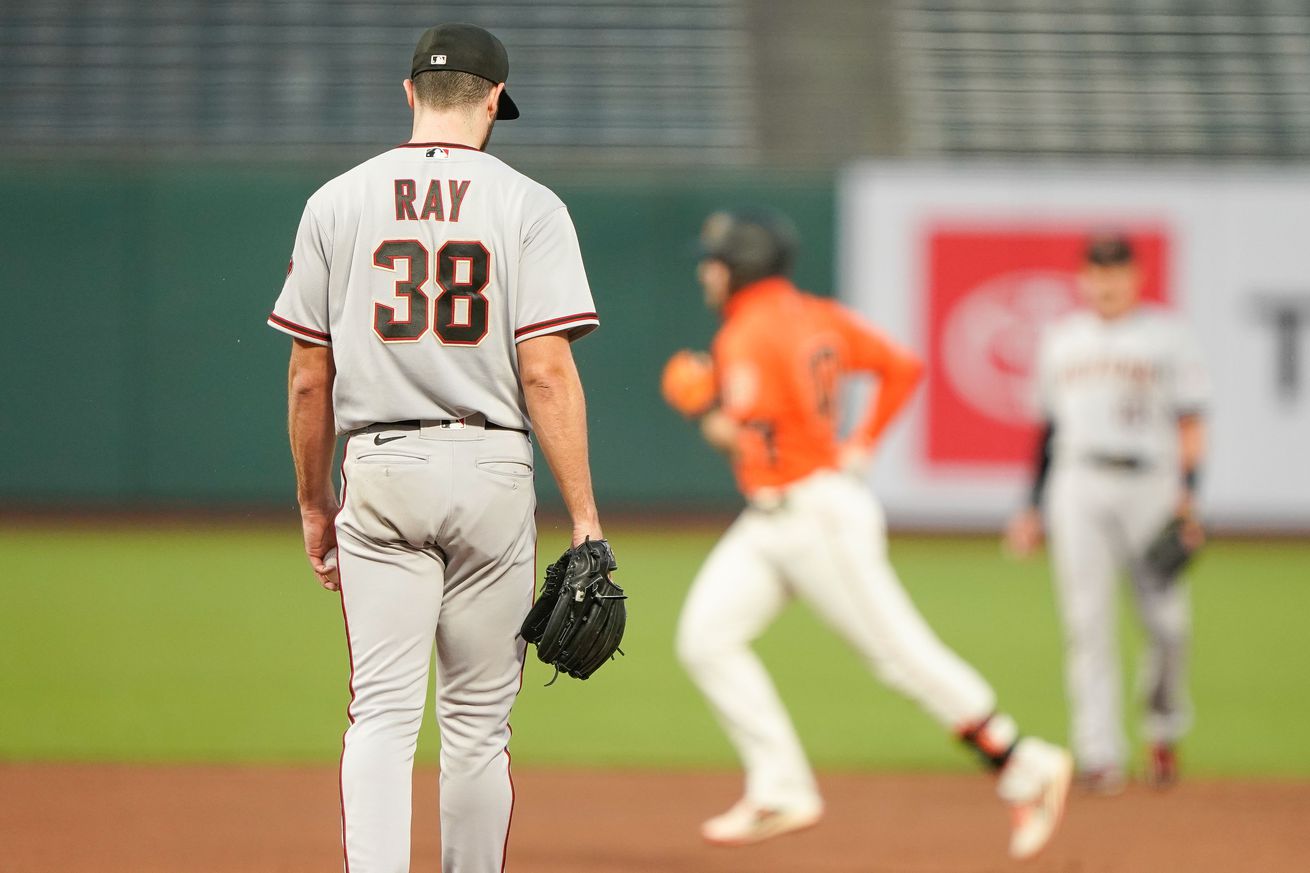 [Copy & Paste Here] Robbie Ray struggled with walks, homers, and high pitch counts, failing once again to get beyond 5 innings and leaving with a 4-2 deficit. The offense was not able to pick him up, scoring just 2 runs. Giants Starter Logan Webb went 7 innings, allowing just 5 hits and 2 runs, without walking a batter and striking out 8. Junior Guerra’s regression to mean continued as he gave up two runs in the 7th to make it 6-2 and complete the scoring for the night.

Ray loaded the bases in the first inning with nobody out thanks to a leadoff walk and two singles. The second single was actually a blast to the left field wall off the bat of Mike Yastrzemski that David Peralta got a glove on but couldn’t haul it in. It was as long as a single can be. Ray managed to get out of the inning though by striking out Wilmer Flores and getting Evan Longoria to hit into a 5-4-3 double play.

loading the bases again in the 2nd, Ray walked the leadoff batter Hunter Pence. Rookie Joey Bart hit a smash off the right field wall for a double, and Maurice Dubon drew a walk. But Ray got Darin Ruf looking, and Donovan Solano lined out to center, as Ray wiggled off the hook again.

Ray was not so fortunate in the 3rd. After striking out Yaz, he walked Flores and then Longoria hit the 300th homer of his career for a 2-0 Giants lead. A scoreless 4th was followed by yet another leadoff walk in the 5th inning to Yaz, and then a two run shot to left off the bat of Flores. Ray managed to strike out the side after that, but the damage was done, as was his night. His final line was 5 IP, 7 H, 4 R, 4ER, 5 BB, 8K, 2 HR, 101 Pitches

Seeing Ray struggle in exactly the same way as he almost always does, and seeing Flores hurt the D-backs, as we knew he would, made us all feel like Stephen Vogt while watching this game:

Vogt is a tough, tough individual.

The pain is real! pic.twitter.com/Ee4YoNiMmc

Meanwhile the Diamondbacks offense was busy doing not much. They managed just one baserunner through the first three innings, a Christian Walker double. That was the first of his four hits on the night. In the 4th inning they managed a couple of runs on another double by walker and then Peralta followed with a long double to triples alley. Eduardo Escobar lined a single to center to tie the game at that point. But that was all of the Dbacks offense on the night.

#FreightTrain crushes it to center to bring in C-Walk and then eventually score himself.

2-2 game in the Bay! pic.twitter.com/xFEmrVPZiM

Giants starter Logan Webb threw 73 pitches through those first 4 innings and it looked like they may knock him out early, but no such luck. He needed just 29 pitches to work through the next three scoreless innings, and the Giants bullpen chipped in two more scoreless frames to close out another punchless night for the Diamondbacks offense.

It’s worth stating, the team fought hard tonight. As much as Ray struggled, he battled. The defense was really good. Escobar made a tremendous grab of a tough hop and gunned out the speedy Mauricio Dubon at first. Jake Lamb made a really nice diving stop on a Dubon smash down the first base line to end the 7th inning after Junior Guerra had allowed the Giants final two runs. And Stephen Vogt made a great snag on a low pitch and fantastic throw to nab Dubon trying to steal to complete a strike em out throw em out in the 6th inning. Tough night for Dubon as he was the victim of the D-backs defense all game.

The offense other than Walker’s four hits and the RBI knocks in the 4th by Peralta and Escobar did nothing all night. Kole Calhoun struck out 3 times and Ketel Marte went 0-4. They didn’t get even one baserunner from the bottom of the order 6 thru 9.

The loss, their third in a row following a 6 game win streak drops the team to 13-14 on the season, but still clinging to the 8th playoff slot. They’ll give it another try at 6:15 P.M. tomorrow night when Torey Lovullo hands the ball to Zac Gallen, who’ll face off against Giants lefty Tyler Anderson.

No Red Comments, but a lively thread. See y’all tomorrow