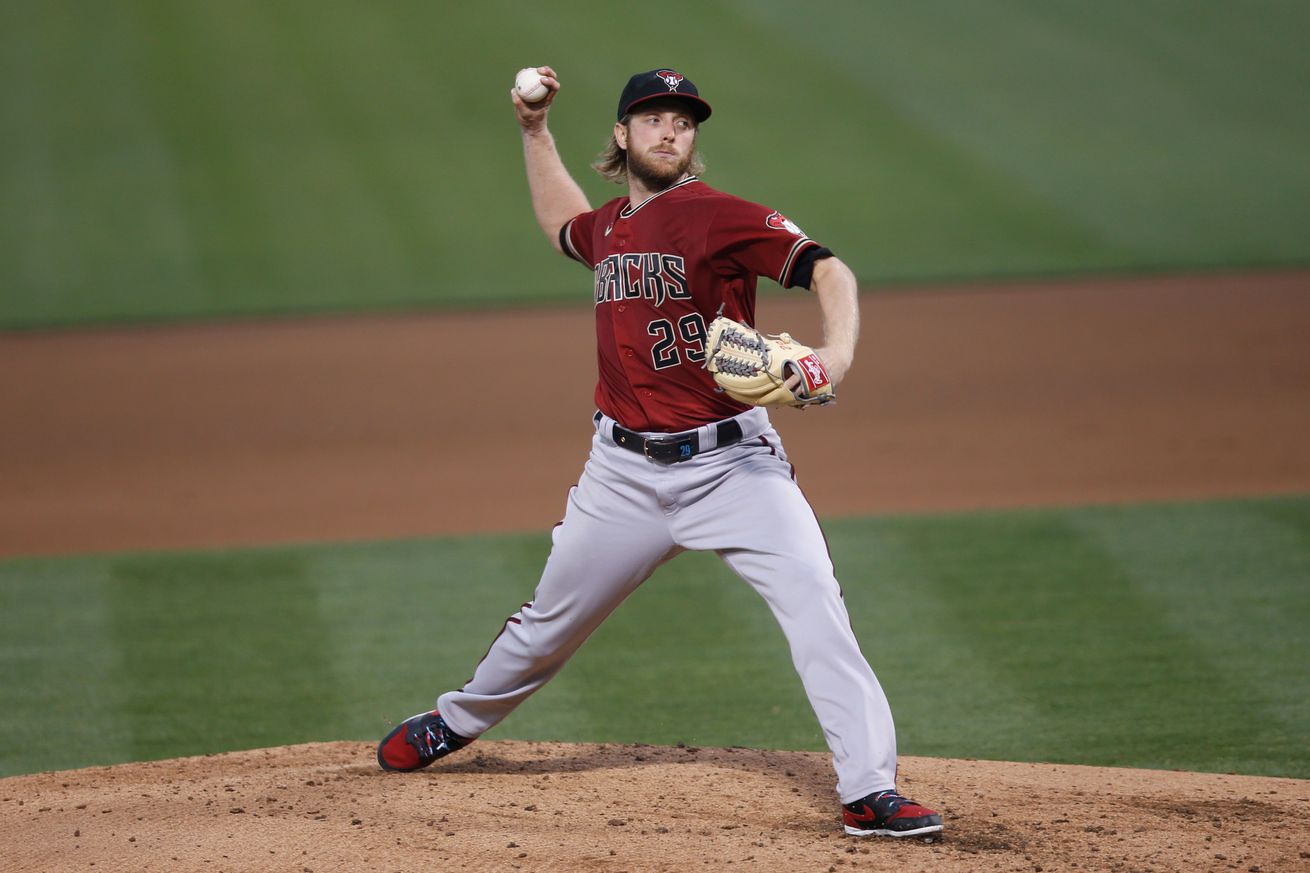 Kelly had a great season in 2020. But is that negated by the way it ended?

The Diamondbacks have some tricky decisions coming up this winter. The financial landscape in 2021 is going to be difficult for many teams, with revenue this year slashed to a fraction of normal levels. While the free-agent market this winter will likely reflect the new, harsher climate, there will be no discounts on previously signed contracts. This means less room for discretionary spending. The first batch of such choices will take place shortly after the World Series, when teams have to exercise player options. For Arizona, there are three such candidates. I figured it might be worthwhile to discuss each of these in more detail, and see what the SnakePit consensus is in regard to each player.

Kelly’s first season back from the Korean wilderness was a bit up and down. He was the team’s workhorse, leading the Diamondbacks in innings pitches, nine ahead of Robbie Ray. But his 14 losses tied Merrill for the league lead. Overall, his 102 ERA+ was likely a fair assessment of what he gave us, and for the price, that was good value. But in 2020, Kelly really proved his worth: indeed, he was Arizona’s only starting pitcher save Zac Gallen to give the Diamondbacks a quality start, doing so in four our of his five outings. While he likely wasn’t quite as good as his 2.59 ERA indicates, Kelly cut more than have a run off his FIP, getting it down just below four, to 3.99.

The exception where he didn’t provide a quality start was his final outing of the year, going only five innings and allowing four runs in Oakland. He was scratched just before his next outing on August 24, with a “right shoulder nerve impingement”, which he said he had been dealing with for the previous ten days. But a couple of days later, it was announced Kelly had surgery to remove a blood clot in his shoulder, and to find the cause, he went to see specialist Dr. Gregory Pearl in Texas. This found Kelly to be suffering from vascular thoracic outlet syndrome, which is when “blood vessels or nerves [the former in Kelly’s case] in the space between your collarbone and your first rib (thoracic outlet) are compressed.”

The symptoms include shoulders and neck pain, as well as numbness in your fingers, and the procedure to relieve it involves taking a rib out to take pressure off the nerves. [No word on whether the removed rib will be used to create Mrs. Eve Kelly…] The process is much less potentially problematic than it used to be, and there are an increasing number of pitchers who have had the surgery and returned successfully, since Kenny Rogers was the first such, back in 2001. They include Matt Harvey, Clayton Richard and Tyson Ross. Chris Archer had it earlier this year. However, nothing medical is ever certain: in 2018, Jay Jaffe wrote on Fangraphs about the “sobering history” of pitchers post-TOS surgery.

By all accounts, the surgery went well, and Kelly was able to lean on both Archer and Alex Cobb, former team-mates when Merrill was in the Rays organization, who have been through the surgery. Cobb in particular proved a source of comfort, as he had suffered from the same variety of TOS, affecting the blood vessels and causing a blood clot. He told our pitcher he hasn’t had any issues since going through the process in 2011; Cobb started ten games for the Orioles this year. “That’s why talking to Alex really put my mind at ease,” Kelly said. If all goes well, Merrill will be able to begin throwing at the start of December, and should be ready to go come the start of spring training in February 2021.

The problem for the Diamondbacks is, they don’t get to wait until then to see how things are going, before making a decision on the option. That will happen shortly after the end of the World Series. Complicating matters further is that the team also holds a $5.25 million team option on Merrill’s services for 2022. According to Jack, “Each option [is] decided independently, do not need to be exercised at the same time.” So they don’t need to commit to two years of the pitcher immediately. But obviously, if this year’s one is declined, the team don’t then get any say at the end of 2021. Kelly would become an unrestricted free-agent, able to sign wherever he wants, for as long as he wants.

If Merrill were to return to health, and pitched at the level he had over 2019-20 combined – a 109 ERA+ – then this would be close to a no-brainer. League average starting pitching does not typically become available for $4.25 million, and he’d not need to be much better than replacement level to make it a worthwhile investment. After Zac Gallen, the D-backs rotation was perilously thin this year following the loss of Kelly: over those 35 games, Arizona starters were 5-15, with everyone else bar Gallen going 2-13. Merrill would seem to be a lock for a starter’s spot if healthy. But the key words there are, of course, “if healthy”. though GM Mike Hazen doesn’t appear to be too concerned, at least, publicly.

It is still a gamble, one where the bet is magnified due to the likely smaller payroll available to the team next year. Though it’s hard to see where else or on whom the team could spend the same amount, that would have even a moderate chance of returning league-average production. You’d likely be looking at a reclamation project, and that would come with its own set of potential risks.