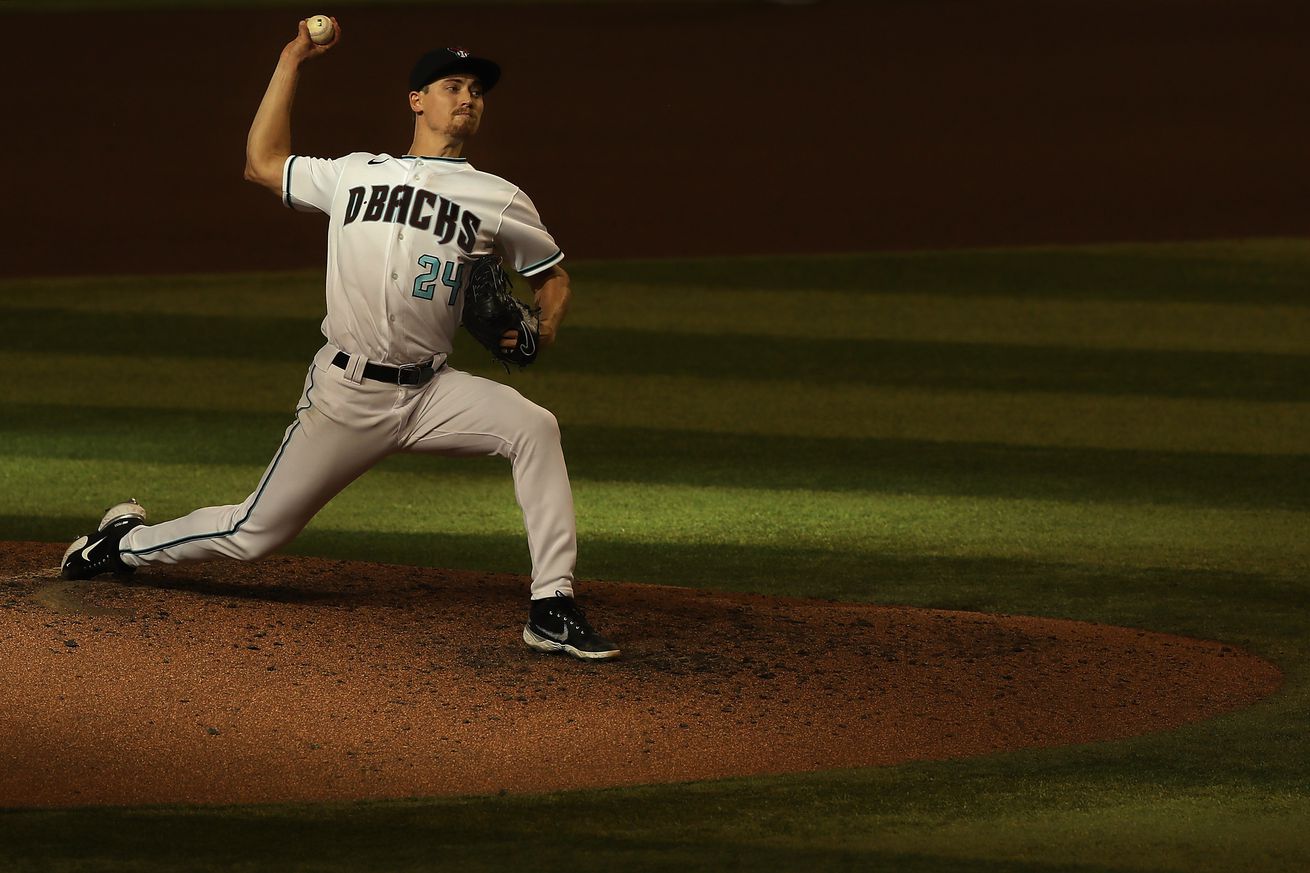 I gotta say I was a bit worried that I drew a Luke Weaver start for this game….high pitch counts in early innings are genuinely painful for me, and that’s pretty much what Luke has been serving up so far this season. I think we’ve all been hoping he’d get the monkey off his back, but I can’t say I was feeling hopeful.

The top of the first was kinda rough, in an ominous, “we’ve seen this before” kind of way. Weaver should have had a three-pitch strikeout to start the game, but home plate umpire Mike Muchlinski called his first pitch, a 96mph fastball that was clearly in the strike zone, a ball, which led to a Marcus Semien single to right on the 7th pitch of the at bat. Weaver then walked A’s center fielder Ramon Laureano on 5 pitches. Weaver wound up wriggling off the hook, with a grounder to Christian Walker at first, a strikeout, and a fly ball to Kole Calhoun in right. So no damage done, but Weaver had already thrown 26 pitches.

The offense decided to show up early, though, and give Luke a nice crooked number cushion. Calhoun smashed the first pitch he saw to deep center for a leadoff double. Stephen Vogt, the prime underperformer of the night, then flew out to shallow center on the first pitch HE saw. That’s when it got fun, though. Starling Marte saw five pitches before hitting a sharp grounder to short that Semien had to range far to his right to make a play on, and easily beat the throw for an infield single. Calhoun advanced to third, putting runners on the corners. A’s starter Frankie Montas then uncorked a wild pitch that rolled to the backstop, allowing Calhoun to score and Marte to advance to 2nd. David Peralta, today’s designated hitter, drew a walk, and then Walker did the same, loading the bases. Eduardo Escobar, playing 2B today, hit a lazy fly to left that was caught in foul territory, but it was deep enough that Peralta was able to tag and score. Then it was Nick Ahmed’s turn. Nick did the business:

Jake Lamb, playing 3B, then drew an 8-pitch walk, though he was stranded as Daulton Varsho flied out to left to end the frame. Still, we sent all nine batters to the plate, and put up a very crooked number. 5-0 D-BACKS

Weaver was kind of shaky in the 2nd as well, surrendering a one-out single to A’s right fielder Stephen Piscotti, and one out later, gave up an RBI double to catcher Sean Murphy. He escaped without further damage, but his pitch count was now at 44 and he’d given back a run. 5-1 D-BACKS

So the Diamondbacks decided to overstuff the cushion. On the third pitch of his second at bat of the game, Calhoun lofted his seventh home run of the season over the home run porch in left center:

After a Vogt strikeout, Marte lined a single to right, but was erased by a David Peralta grounder to short. Peralta hustled down the line, though, and beat the throw to first, avoiding the double play. Christian Walker then singled sharply to left, and Escobar put up a very nice at bat to draw an eight-pitch walk. That actually chased Montas from the ballgame, and Lou Trivino took the mound to face Ahmed with the bases loaded. And, for the second inning in a row, Nick delivered, this time with a 2-RBI single:

How about 5 RBI so far for Slick Nick!!

Peralta and Walker scored, and Escobar advanced to third. Jake Lamb then singled to right, driving in Escobar, and for the second inning in a row bringing the ninth batter to the plate. Sadly, Varsho struck out swinging, but we’d added nicely to the cushion. 9-1 D-BACKS

It seemed like that was enough of a lead to make Weaver feel more comfortable, as he went back to work, sitting down the heart of the A’s lineup in order on only 11 pitches, recording 2 Ks. He did the same in the 4th, racking up two more strikeouts on only 12 pitches. He had to work a bit harder to get through the 5th, throwing 20 pitches that inning, but again retired the side in order. That was the end of his day, but for the first time this season he went deep enough in the game to be eligible for the win. His final line was a perfectly serviceable 5IP, 3H, 1ER, 1BB, and 6K, with a total of 87 pitches thrown.

Meanwhile, the Diamondbacks cooled off offensively as well, going quietly in the 3rd, 4th, 5th, and 6th. Marte reached on a walk in the 3rd, and Varsho was hit by a pitch in the 5th, but nothing came of either base runner.

The D-Backs, meanwhile, threatened in the 7th, thanks to a one-out Nick Ahmed hustle double to shallow left and a Jake Lamb single that was hit sharply enough that Ahmed could only advance to third. Varsho once again ended things by grounding into a 6-4-3 double play, his last at bat of a disapppointing night.

In the eighth, though, John Jay (who had been swapped in for Calhoun at some point—after the 6th inning, I think) drew a leadoff walk, and after Vogt made his fifth out of the game on a fly ball to deep right, Tim Locastro (in for Marte), shot a line drive into the gap in right center for a double, driving in Jay. 10-1 D-BACKS

And that was all she wrote. Yoan Lopez pitched the ninth, giving up a one-out single but then inducing a game-ending double play. All in all, it was a helluva a performance by the entire team—offense, starting pitching and bullpen all showed up today and did the business. This was a fun one.

And despite whatever perceived editorial impropriety there might be here, the CoTG has to go to our fearless leader, not only because it was the reddest comment of the day, but also because of the next level prophecy at work. That was some Hamstradamus sh*t right there. So.

Join us tomorrow for game 3 of this home-and-away series, where we look to extend our win streak to 7 games and go for the season series win versus Oakland in their house. Mighty Merrill Kelly takes the mound for the Snakes, and goes up against A’s lefty Jesus Luzardo. First pitch at 6:40pm AZ time.

As always, thanks for reading. Go D-Backs!