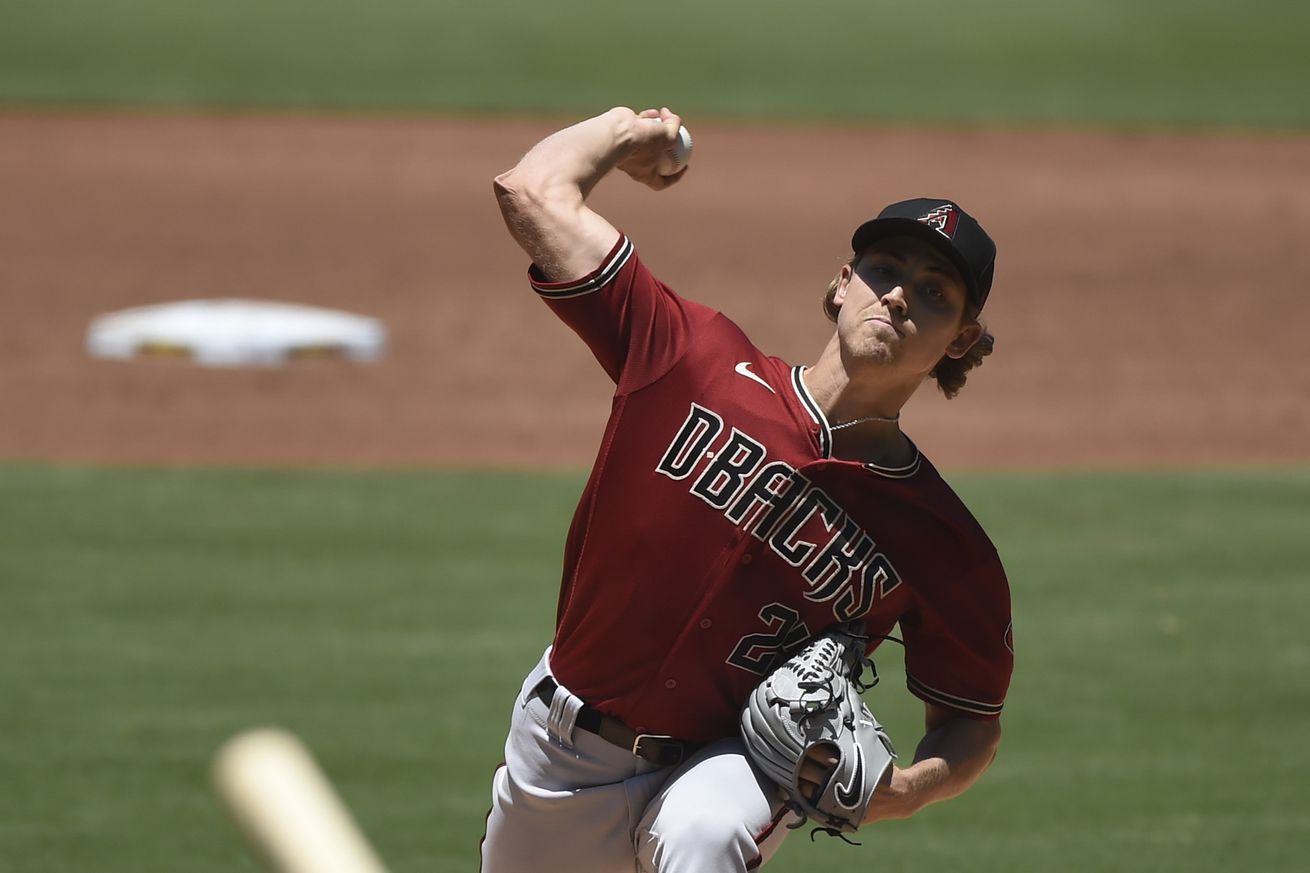 On the plus side, Arizona pitchers didn’t walk 7+. So, there’s that…

The D-backs were feeling good coming into this one, having got their first W of a season last night, and going up against a pitcher whom they had handled well in the past. Initially, things looked promising, with Arizona taking a 2-1 lead after three innings. However, starting pitcher Luke Weaver came undone extremely quickly in the fourth, as San Diego scored five times without recording an out. That proved to be enough, and the D-backs dropped three out of four in the opening series of this 2020 season.

It looked like the Diamondbacks would get out of the gate running. Ketel Marte lined the first pitch to left, and one out later, Starling Marte dumped one into right. After Eduardo Escobar drew a walk, the bases were loaded for Christian Walker. But the myth of “good things happen when you put the ball in play” was cruelly exposed once again, as Walker grounded weakly into an inning-ending twin killing. The Padres then took the lead on a solo home-run off Weaver. He gave up some hard contact, and needed 22 pitches to get through the inning, though did strike out a pair.

Luke improved that in the second, striking out the side. Although he did seem to be getting away with some location mistakes, and walked his first batter. Hey, it was a nice [checks notes] 1.1 innings of BB-free pitching while it lasted. But the D-backs responded, scoring twice in the third, with some help from the San Diego sun. It had already caused an issue, making the home 1B drop a pop-up. Then, with two outs and Nick Ahmed on first, Starling blooped a high fly-ball up into the sun, down the right-field line. The incoming right-fielder seemed to misjudge it, and it clanked off his glove into foul territory. Ahmed scored, Marte was on third, and trotted home on Escobar’s single, to give Arizona a 2-1 lead.

That went away in the fourth as Weaver became unthreaded, and San Diego began to loom with increasing menace. [Weaver… unthreaded… loom… Hey, it’s a short season, I may not get another of his outings.] The meltdown began with another walk from Luke. But the issue was more the four hits and a plunked batter which followed, before the Diamondbacks could record the first out. The home team had already tied the game, then taken the lead, before the Padres’ signature bases-clearing knock (in this series, they went 4-for-5 with the bases loaded, driving in 10 runs). This one was by Fernando Tatis Jr, making it 6-2, as they scored five runs in the span of just eight pitches.

Weaver left after 3.1 innings, becoming another short start for Arizona. He allowed six runs on seven hits, a hit batter, two walks, with six strikeouts. How long ago it seems, when I thought our rotation would be a strength. It hasn’t quite worked out that way. In this series, this has been their combined line:
D-backs starters: 16.2 IP, 17 H, 13 R, 13 ER, 13 BB, 23 K, 7.02 ERA
Taylor Clarke came in to take over from Weaver, for some long relief, and an intentional walk to Manny Machado worked perfectly, as Tommy Pham then hit into a double-play.

The fourth was finally over, leaving the Diamondbacks with an uphill climb, even if Padres’ starter Joey Lucchesi had actually beaten Weaver to the showers. It looked like they might answer back immediately, putting two on with one out in the top of the fifth. But Escobar and Christian Walker were unable to come through. Similarly, in the seventh, Ahmed reached on an error by the pitcher to begin the inning, but Arizona was unable even to move a runner into scoring position, never mind get them across home-plate. The offense managed only one hit over 5.1 innings from the San Diego bullpen, as the promising start to this afternoon’s game sputtered out into the void.

On the positive side, Clarke followed Alex Young yesterday, and did a good job of keeping the Padres where they were, in extended middle relief. He was effective and efficient, needing only 43 pitches to get through 3.2 innings. Taylor walked a pair and struck out three. Junior Guerra worked a 1-2-3 eighth inning, so the Arizona bullpen did its job, not allowing a hit over 4.2 frames of work. Over the series, D-backs relievers worked almost as much as the starters, tossing 16.1 innings. Their ERA was rather better, at 4.41, but a K:BB of 19:14 is definitely cause for concern. Improvement all round is needed by the pitching.

The Gameday Thread pretty much came to a grinding halt after the fourth inning, for reasons that are largely understandable. That, and this being a day-game, led to a sharp reduction in comment numbers, with only 150 – about one-third of what we saw over the weekend. Present were: AzDbackfanInDc, ChuckJohnson56, Craig’s City Counsell, DBacksEurope, DesertWeagle, Driaz, GuruB, Hazzard21, Jack Sommers, Jim McLennan, Keegan Thompson, Makakilo, MrMrrbi, Oscar Goldman, Preston Salisbury, Sprankton, Totally Not Blind Squirrel, but still I apologize, edbigghead, gzimmerm, onedotfive, ryeandi, since_98 and suroeste.

Preston and Keegan both delivered Sedona Red comments. I’m going for the latter, simply because it did not contain a horrendous pun. Though I agree with the sentiment about working from home too, even though Monday is a scheduled day off for me anyway!

After a game like that, I must confess, I’m rather more amenable to the idea of the 2020 season being canceled, given the infectious news out of Florida. However, I suspect that won’t happen, at least not immediately, and so it is on to Texas for the Diamondbacks. Just a two-game set there, as we get our first chance to look at Globe Life Arenaopolis, or whatever it’s called. It’ll also be our first chance to look at Merrill Kelly, returning to the rotation due to the absence of Mike Leake. First pitch tomorrow is at 6:05 pm.