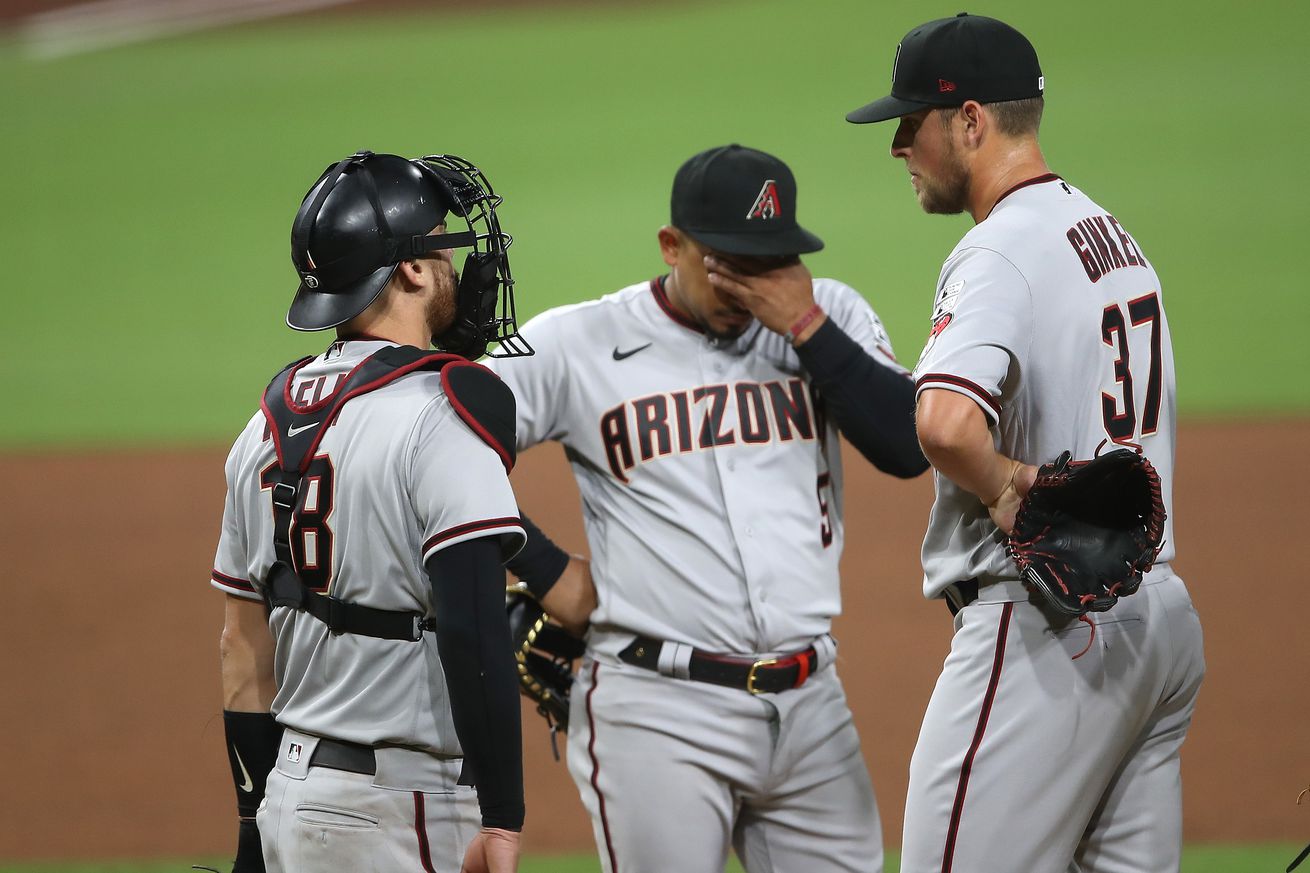 Madison Bumgarner’s 100th and final pitch proved decisive. And not in a good way.

Let the second-guessing begin! Madison Bumgarner’s debut as an Arizona Diamondback had gone very well through the first five innings. He had pitched scoreless ball, and never been particularly in trouble, allowing only a couple of singles. His expected pitch count was in the 90-95 pitch range. But as the sixth inning unfolded, at what felt like a glacial pace, he seemed to run out of gas. He got the first out, then Fernando Tatis Jr. banged one off the wall in right for a double. Bumgarner then walked two batters, to load the bases for San Diego, with two outs.

Torey Lovullo did have a reliever warming. The problem was, it was right-hander Junior Guerra, and coming up was left-handed hitter, Eric Hosmer. Should the manager have had double-barrel action in the bullpen? Should he have pulled Bumgarner anyway? [Admittedly, lifting your ace on Opening Day in a scoreless contest, might not be a conversation I would want to have] Instead, Torey left his starting pitcher out there. With Hosmer 0-for-15 before tonight against Bumgarner, you can see the argument, even as 95 pitches were left in the rear-view mirror.

Initially, it seemed to be working out, as Bumgarner quickly jumped ahead to an 0‐2 count, one pitch from escaping the jam. But that third strike never arrived. Instead, pitch #100 caught too much of the plate, and Hosmer swatted it over into the right-center gap. The bases emptied, and the Padres has cracked the scoreless tie, to take a 3-0 lead. It was the end of MadBum’s night, after 5.2 innings, allowing three runs on four hits. He had looked good early on, taking advantage of Ted Barrett’s wide strike-zone to strike out four the first time through the order. But there were none thereafter, and two of the three walks he allowed, came around to score.

Meanwhile, the offensive struggles which we saw during the warm-up games in Los Angeles persisted into the regular season. Chris Paddack may only have had 26 major-league games to his credit, but his fastball/change-up combo proved trouble for Arizona. Seven of the first ten hitters found themselves in an 0-2 count. The D-backs did have their opportunities, but twin killings ended the first and second innings. The latter was particularly painful, as singles from Christian Walker and Kole Calhoun had put runners on the corners with one out. In the third, Jake Lamb doubled to lead things off. He had advanced no further when the inning ended, three batters later. That was the last hit they’d get off Paddack.

Arizona did get on the board following the departure of the Padres’ starter after six innings. With two outs in the top of the seventh, Calhoun connected firmly with a 96 mph fastball from Emilio Pagan, launching it 432 feet into the empty right-field bleachers. That puts him on the list of players to homer for the Diamondbacks on their debut… But there doesn’t appear to be a Baseball Reference search I can use to find out who he joins. I know Felipe Lopez homered twice – once from each side of the plate – on Opening Day back in 2009. I’m sure there are probably others. I know six players have homered for Arizona in their MLB debuts, most recently John Hester in 2009.

Any hopes of a Diamondbacks’ fight-back proved short-lived, thanks to Kevin Ginkel, with an assist from Torey Lovullo. For the manager left Ginkel out there, apparently oblivious to the horrendous yanking he was doing to his fastball. Ginkel ended up throwing 33 pitches in his 2020 debut, one off his career high. I do wonder, what’s the point of an expanded roster? Ginkel had already allowed one run, on a two-out single. But the last of his pitches – and stop me if you’ve heard this before – came to Eric Hosmer with two outs and the bases loaded. The result – and stop me if you’ve heard this before either – was a bases-clearing double off the outfield wall, making it 7-1 to the Padres, and sending me to recap duty.

Ginkel allowed four earned runs in 0.2 innings tonight, matching the number he gave up in all 24.1 innings he pitched last year. Stefan Crichton came in and got the final out, then Yoan Lopez allowed a hit and a walk in a scoreless eighth. All told, Diamondbacks pitchers issued seven bases on balls in eight innings, not exactly a recipe for success. Mind you, neither is scoring two runs. Calhoun had two hits, while Lamb had a hit and the Diamondbacks’ only base on balls. Arizona did push across another run in the ninth; Starling Marte got an infield single, took second on defensive indifference, and came home on a Christian Walker bloop single. But if you were still watching, you’re a better man than I.

So, 59-1 it’ll be, am I right? It was still nice to see meaningful baseball on television, though I have to say, the volume of political adverts during the commercial breaks, makes me REALLY glad it’s only a 60-game season. That shit is already old, like sushi. There were over 500 comments from 36 different people in the Gameday Thread, which is not bad, considering how long it has been since the last D-backs major-league contest. I see some are already in mid-season complaining form. 🙂

It is, unsurprisingly, the same two teams again tomorrow, in the same park, for another 6:10 pm start. Robbie Ray, who has looked really good in his pre-season appearances, will start for Arizona as we seek to get into the win column.