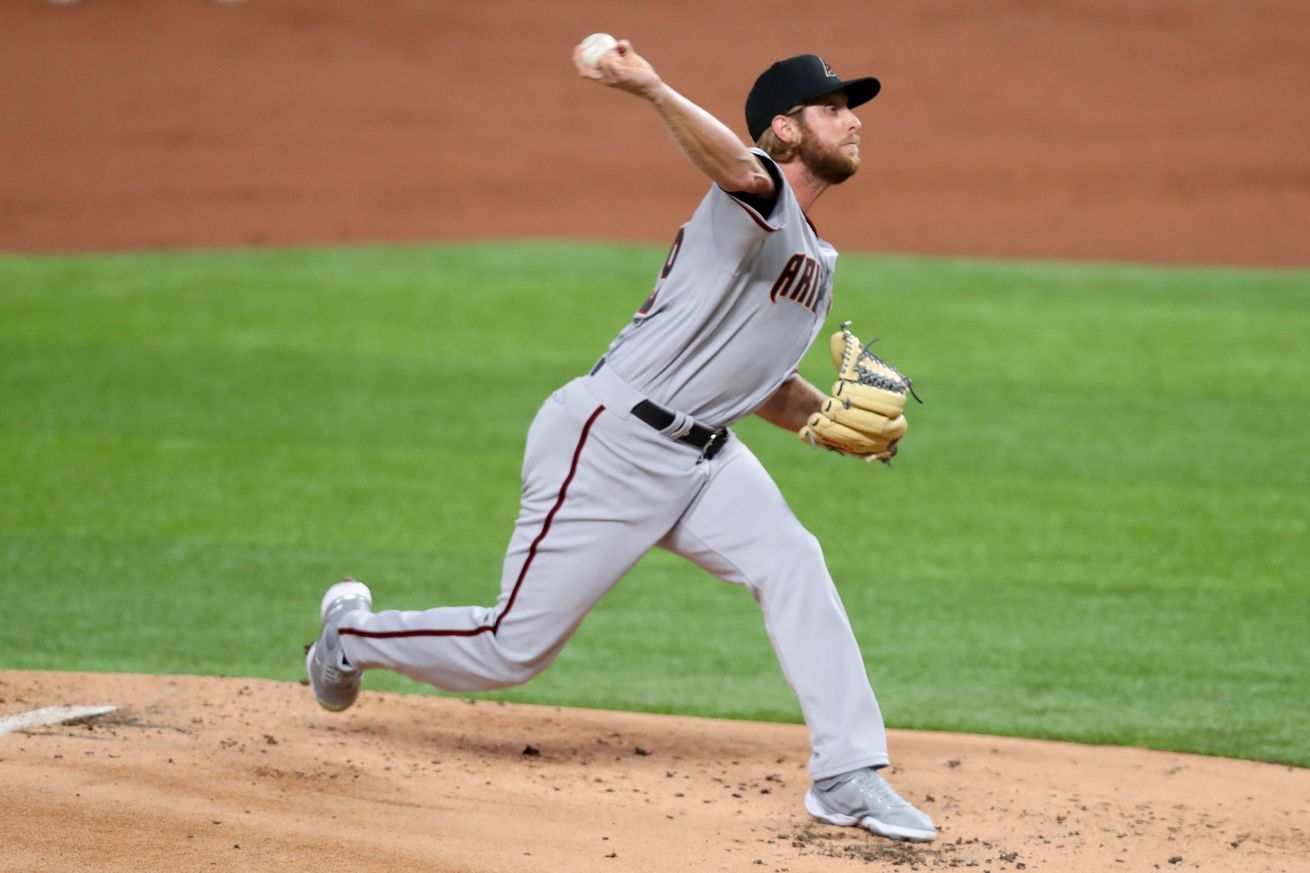 Merrill Kelly took a no-no into the 7th, the offense began to show some signs of life, and the good guys notched their second win of the year…

After watching the first four games of this strange, truncated season, I found myself quite pleased to have drawn the Merrill Kelly start. I was a sometimes lonely cheerleader for him last year, and one of the things I always appreciated was that he pitched to contact, let the defense play behind him, and often went deep into games. After three straight where our starters didn’t even reach the 5th inning, I was hoping for some quick innings. And boy did Kelly deliver.

It probably helped that the offense, with some help from sloppy defensive play by the Rangers, staked Kelly to a three-spot before he’d even taken the mound. After Ketel Marte and Calhoun were retired to start the game, Starling Marte showed uncharacteristic patience and drew a 7-pitch walk from Rangers starter Kyle Gibson. Eduardo Escobar followed with a single up the middle that allowed Marte to advance to third, with Escobar taking second on the throw in from the outfield. Christian Walker almost snuffed out the two-inning rally with a high chopper to third, but Isiah Kiner-Falefa, the Rangers third baseman, made an errant throw to first that wound up rolling to the fence. SMart and Escobar scored.

Marte is home.
Escobar is home. @Dbacks on the board! pic.twitter.com/iTWeRokZvA

David Peralta followed with a single to center that scored Walker. After a Jake Lamb walk, Steven Vogt ended the inning with a grounder to second, but lo and behold we had put up a crooked number! Hooray for crooked numbers, they have been few and far between. 3-0 D-BACKS

Kelly then took the mound, and retired the top of the Texas lineup in order, notching two strikeouts but only requiring 12 pitches. Brilliant.Things got quiet after that on both sides for some time thereafter. The D-Backs put leadoff batters on first in the 2nd, 3rd and 5th innings, on a Nick Ahmed single, an Escobar walk, and a Ketel Marte single respectively, but Ahmed was stranded and the other two were erased by double-play balls. Starling Marte reached in the fifth with a two-out single, and promptly stole second, but other than that, it was all quiet.

Merrill Kelly, meanwhile, was cruising: despite giving up a leadoff walk to Joey Gallo to start the 2nd, he didn’t allow another runner to reach base until the 6th inning, when Kiner-Falefa hit a sharp grounder to short that Ahmed had to range a long way to get to, and whose subsequent throw wasn’t good enough to beat Kiner-Falefa to the bag. It was unclear whether that was the end of the no-no until the game returned from commercial for the top of the 7th, when word came down that the official scorer had called it an error on Ahmed. Honestly, that was pretty generous….my feeling was that it was genuinely an infield hit. But, hey, the no-no was still on.

Meanwhile, back in the top of the 6th, we tacked on a fourth run thanks to a Christian Walker leadoff double over the head of Joey Gallo in right. Winslow was out of the game by that point, and the reliever who’d replaced him, one Ian Bibaut, allowed him to advance to third on a balk. Peralta then grounded out to second and Jake Lamb struck out, and I began getting flashbacks from the Padres series and all those runners who got into scoring position with nobody out and then were stranded. But no, happily. Instead, this:

Steven Vogt chose that moment to drill a double right down the line into the right-field corner, scoring Walker. 4-0 D-BACKS

Sadly, Kelly lost the no-hitter bid with one out in the seventh, when he left a change-up in the middle of the zone that Texas second-baseman Rougned Odor turned on and deposited six rows up in the empty right field seats. Kelly wasn’t rattled, though, and promptly retired Joey Gallo and Todd Frazier to end the frame. 4-1 D-BACKS

The bottom of the 8th got a little tense, as Kelly gave up back-to-back one-out singles to Elvis Andrus and Robinson Chirinos. Somewhat to my astonishment, Torey Lovullo left Kelly in to face one more batter, despite having Andrew Chafin ready in the bullpen, and with Kelly at, I believe, 99 pitches. Torey is wise, though….Kelly induced Kiner-Falefa to pop up to second before exiting. Chafin entered and let the count go full against Rangers leadoff batter and left fielder Shin-Soo Choo, but rather than walking him, he actually got the strikeout. Yay Andrew! Maybe Jack’s right about him. Hmm.

Ketel Marte reached in the Diamondbacks 9th with a one-out single to right, and Starling advanced him to second by getting hit by a pitch, but nothing came of it. And then Archie Bradley came out for the ninth, and despite throwing nothing but 93-94mph four-seam fastballs for his first eleven or twelve pitches, struck out the side. Good job, Beard!

Sadly the SBN roll call doesn’t seem to want to function tonight, so I can only tell you that there were 228 comments, and the CoTG goes to suroeste, for this gem:

Thanks for reading, as always. And come on back tomorrow to see if we can get a mini-series sweep and even our record! Madison Bumgarner takes the mound for the Snakes, facing the Rangers’ opening day starter Lance Lynn. First pitch is 1:05pm AZ time. Go D-Backs!