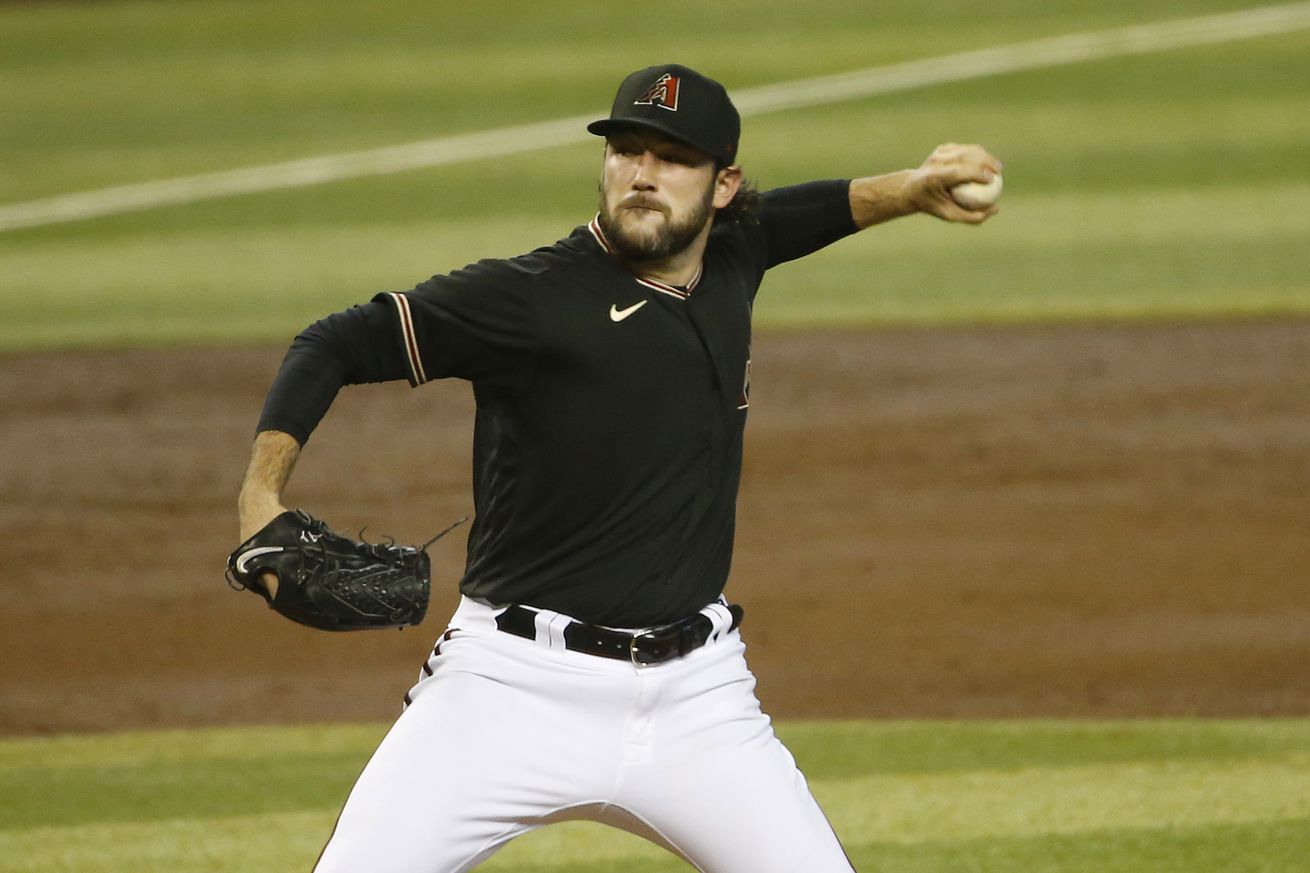 D-backs hold on for thrilling win

Alex Young threw 4 1⁄3 effective innings , and Nick Ahmed hit a two run double in the 6th to break a 1-1 tie, opening up the offense for the D-backs. Carson Kelly had his best game of the year and the bullpen just barely hung on late to secure the 7-6 victory.

If you read the preview, (everyone really needs to read the previews) or have been just watching the games, you know that the Diamondbacks offense has struggled early in games and against starters, but have been doing a lot of damage late in games against bullpens. Tonight was no exception.

Things started out like they usually do against the Padres, with Fernando Tatis Jr. homering in the 1st inning, this time out of the three hole in the lineup instead of leading off. That was the only run Young would allow on the night however.

He worked around a leadoff double by Wil Myers in the 2nd, stranding him. Then he had a 3 up 3 down 3rd, and workout out of a bases loaded jam in the 4th. After retiring one batter in the 5th he was removed having thrown 63 pitches. His previous season high was 33. Kevin Ginkel relieved and closed out the 5th scoreless as well.

It’s going to be VERY interesting to see what happens when and if Madison Bumgarner returns. If Young keeps pitching like this it will be very hard to justify not leaving him in the rotation.

Meanwhile the D-backs offense was busy doing very little in the early going. A scoreless first inning was followed by a scoreless second. It was the 21st straight game the D-backs failed to score in the 2nd inning this year. As Jim said prophesized in the preview:

“ If you’re going for a bathroom break, the bottom of the second might be the time.”

Scoreless again in the 3rd, they broke through with a run in a 4th, although it could have been more. David Peralta singled, his second of three base hits on the night. Red hot Christian Walker, who is hitting everything hard these days followed with a smash off the centerfield wall above the 407 mark. But 3rd base coach Tony Perezchica sent Peralta home to a certain death at the plate when Jake Cronenworth made a nice relay throw to get Peralta easily. Carson Kelly came through with a two out hit however to score Walker and tie up the game.

Carson Kelly’s two-out RBI single pulls the @Dbacks even with the Padres. pic.twitter.com/Qs3zKUQgA3

In the bottom of the 6th the D-backs plated 4 runs to take 5-1 lead. Walker singled sharply, Eduardo Escobar drew his second walk of the game and Kelly singled to load the bases. After Daulton Varsho struck out Nick Ahmed waited out a wild Pierce Johnson and roped a double down the line on a 3-1 count to score two runs. Kole Calhoun followed with a ground out to 2nd that scored a run and then Ketel Marte bunted for an RBI single to plate Ahmed and the 4th run of the inning.

The D-backs tacked on two runs in the 7th to make it 7-1, and it turned out they really needed them. Stefan Chrichton worked two efficient scoreless innings in the 6th and 7th. But he was followed by Taylor Widener in the 8th who had a disappointing outing, walking three and allowing a two run homer . That forced Archie Bradley into the game with two on and two out to try to get 4 outs to close it out. Carson Kelly, having a great night, made an excellent play on a popup over the dugout railing to end the 8th and preserve the lead at 7-3.

The Padres rallied in the top of the 9th. Edward Olivares hit a one out single, and that was followed by doubles from Manny Machado and Tatis, plating two runs. Eric Hosmer struck out, and D-Backs were just one out away from victory, but Greg Garcia singled home Tatis, making it a 7-6 ballgame. Archie fell behind Jurickson Profar 2-1, and lined a single to center. Pinch Runner Jorge Mateo was waved home and gunned down by the Ketel Marte on the relay and a good tag by Kelly. But just to make us sweat, the play went to replay review before finally upholding the out call.

COTD goes to NikT for this gem. Funny because it’s true.

The Snakes will go for the series sweep tomorrow at 1:10 P.M. when Robbie Ray faces off against Garret Richards