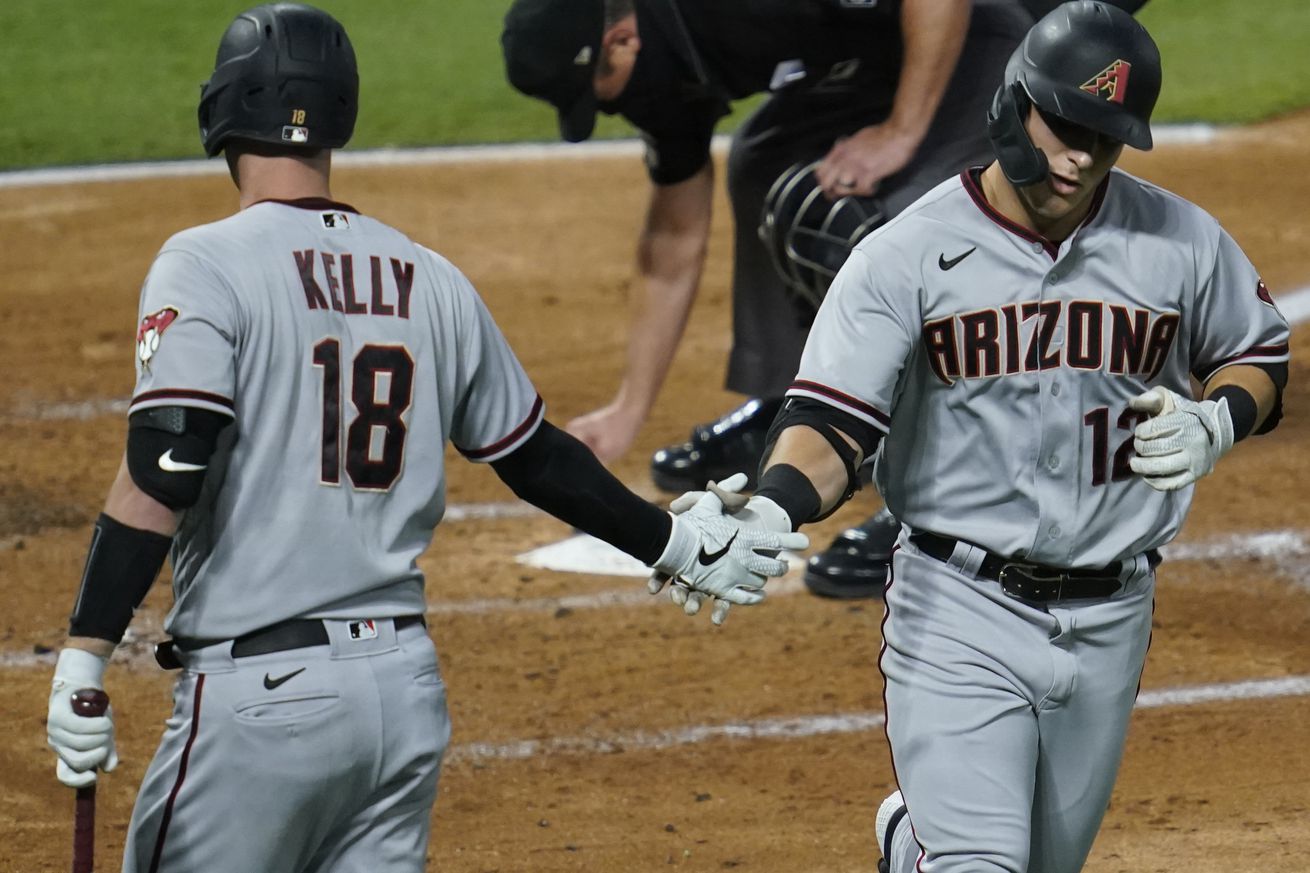 Way more topsy-turvy than was perhaps necessary, but a helluva a ride that ended happily for once!

It’s kind of freeing to be at this point in the season, when both we and the Angels are effectively out of contention, and playing a game that was essentially meaningless in terms of making it into the rather dubiously expanded 2020 postseason. No expectations, no hail-mary hopes, no soul-crushing fear that those hopes would be dashed by a late-inning meltdown or what have you. Let’s just play baseball, enjoy it for what it is, and not worry at all about the ultimate outcome, right?

Troubled (and expensive) Diamondback lefty Madison Bumgarner took the mound, facing off against similarly troubled—at least in statistical terms—Angels righty Julian Teheran in Anaheim tonight. There was almost no trace of apocalyptic smoke or fire, either, in the stadium views we could see, so that was a hopeful sign. Hope may well be the enemy right now, but still, it was nice to see. Anyway.

The first two Diamondback at-bats were in no way hopeful. Josh Rojas swung at the first pitch he saw and popped out to Andrelton Simmons at short, which was a bad early indicator on the plate-discipline index. Pavin Smith then flew out to left after a somewhat more patient AB. Teheran’s control took a dip, then, though, as he proceeded to walk Christian Walker on four pitches. We haven’t been brilliant with two-out RISP all season, so I think expectations were low as Kole Calhoun, who started the game batting below the Mendoza line, came to the plate. Kole was clearly happy to be back at his old baseball home, though, as he sent the second pitch he saw into the stands in right center.

Eduardo Escobar then launched a fly ball to deep center, that was not quite deep enough to leave the yard as well. Still, we’d staked Bumgarner a crooked number before he’d even taken the mound. 2-0 D-BACKS

That wasn’t enough, either, as in the top of the 2nd, we got two more dingers, back-to-back solo shots, from the bottom of our order, as Daulton Varsho hit a two-out blast to right and Carson Kelly followed with a shot to left that was just deep enough to get over the wall.

First back-to-back home runs of the season for the @Dbacks.

This was the first instance of Diamondbacks hitters going deep back-to-back in 2020, incidentally. 4-0 D-BACKS

Perhaps understanding that four runs is not necessarily enough for the Diamondbacks in 2020, our offense continued the slugfest in the top of the 3rd. Pavin Smith singled to left to lead off the frame, and Christian Walker followed with his second walk of the game against Angels reliever Hoby Milner, who’d come out to in relief of Teheran to begin the 3rd. Then Calhoun stepped to the plate for his second appearance, and it only took him one pitch to do the business again:

ARE YOU KIDDING ME KOLE CALHOUN?!!

You may notice that I haven’t mentioned Bumgarner to this point, and that’s because, despite some messiness in the 1st and 2nd innings, he got through them without damage and with only 28 pitches thrown. He didn’t look great, but he looked far less bad than he has in just about all of his starts for us so far. He let the Angels get on the board in the bottom of the 3rd when he surrendered a 2-out homer to right to Angels first baseman Jared Walsh, who to be fair had apparently hit 5 dingers in his last four games or something like that. That was all the damage, though, as he got Anthony Rendon to fly out to left after surrendering a single to Mike Trout (which, honestly, you feel like you can also forgive…it is Mike Trout, after all). 7-1 D-BACKS

So our 7-run lead had been cut to 6, but not for long, as Carson Kelly led off the 4th with a double to right center, his second extra-base hit of the game. Rojas then grounded to first, a productive out that allowed Kelly to advance to third. A Pavin Smith sacrifice fly to right (his first Major League RBI) brought Kelly home. 8-1 D-BACKS

Bumgarner, meanwhile, recorded another scoreless inning, pitching around a two-out single to Angels catcher Max Stassi. Our guys failed to score in the top of the fifth, their first inning without a run (I know, weird, right?), And then, in the bottom of the 5th, the wheels started to come off for Bumgarner.

Simmons led off the bottom of the 5th with a single to right. Angels leadoff man David Fletcher followed with another single to right. A passed ball advanced the runners to second and third, and then Jared Walsh shot a double to right, scoring them both. Mike Trout then popped out to shallow right, before Rendon hit a single to left that plated Rendon. Pujols grounded out to Bumgarner himself, and then former Diamondback Justin Upton launched one into the left-field stands. Stassi ended the pain by grounding out to Escobar, but still. 8-6 D-BACKS

Carson Kelly doubled for the second time in the top of the 6th, this time into the left field corner, which was nice to see—he was 3 for 3 at that point—but was stranded as neither Rojas or Smith could advance him to third, much less get him home.

To some folks’ surprise (and, frankly, outrage), Bumgarner came out to start the 6th. I could kinda see it, as he’d only thrown 68 pitches through five innings, despite the trouble the previous inning, and one could hope that, as ugly as it was, it had just been an aberration, and Bumgarner would right himself. Sadly, however, it wasn’t, and he didn’t. He gave up three consecutive doubles, before managing to induce a Jared Walsh groundout to Ahmed at short. That was the end of his night, after which Junior Guerra came out and retired Trout and Rendon. But, as they say, it was a whole new ballgame! 8-8 TIE

Our boys went quietly in the top of the 7th, and current front-runner for Dan’s New Favorite Member of the Bullpen Keury Mella set down the Angels in order in the bottom of inning.

David Peralta led off the top of the 8th, facing off against our old friend Matt Andriese, and, well, the fact that Andriese was out there in such a situation seems to indicate that perhaps the Angels’ bullpen sucks as much as ours has tended to do of late. The Freight Train worked the count to 2-2, then jacked this bad boy out to right-center, the fifth D-Backs dinger of the evening:

Hector Rondon pitched around a one-out walk in the bottom of the inning, and the Diamondbacks squandered a two-out Walker double in the top of the 9th, but I suppose we shouldn’t get too greedy in terms of plating RISPs with two outs. We’d already done a lot of that early.

Stefan Crichton came out to try to get the save, which made a lot of us in the GDT nervous, but lo and behold, he sat Trout, Rendon, and Pujols down in order, saving a win that should probably have never been a save situation in the first place. But what the hell, right? We’ll take it!

Yeah, okay, so my own Pink Floyd partisanship is showing a bit there. I dunno. Deal with it. I love you all.

Meanwhile, we once again had an incredibly lively and far-reaching Gameday Thread, especially for the penultimate Tuesday of the 2020 season, when Mount .500 is entirely out of reach. We had a pretty whopping 399 total comments from 25 different stalwart contributors, with DC and Oldenschoole leading the way (aside from me) with 96 and 29 comments respectively. All present and accounted for were: 68 88 96 98, AzDbackfanInDc, AzRattler, Dano_in_Tucson, Diamondhacks, EdTheRed99, GuruB, Jack Sommers, JoeCB1991, Makakilo, Michael McDermott, MrMrrbi, NikT77, Oldenschoole, Preston Salisbury, Rockkstarr12, Schilling2001, Smurf1000, Snake_Bitten, gzimmerm, kilnborn, onedotfive, since_98, therealramona, vonJunk

So, the CotG….hmm. Full disclosure, I was getting lobbied somewhat hard in the thread by a certain someone, and Preston racked up the only three comments that went Sedona Red. That is itself impressive, perhaps even mighty, but none of them were exactly game-specific. So, despite the inevitable perception that some might have that I was bowing to pressure or what have you, I am giving this one to DC, because bribes (natch), but also because he called this one right before the Calhoun 3-run shot in the 3rd, and I do love me some prophecy. Especially when it predicts a good thing for us that actually happens:

UPDATE: To be fair, though, even if it isn’t game-related, Preston’s fish-relevant research post is a beautiful thing, and it was posted quickly and early, and it also racked up eight recs, so it deserves its own place in the sun. Behold the mighty powers of a whimsical librarian with a mind for baseball:

If you feel so inclined, please drop by again tomorrow, to watch new Diamondbacks lefty Caleb Smith take the mound against Angels RHP and starter-that-doesn’t-suck Dylan Bundy. The Angels seem like they have the advantage here, but we burned a lot of their bullpen tonight, so it should be interesting, and Smith didn’t look too shabby his first time out of the gate for us. First pitch is 6:40pm AZ time, just like today. Hope to see you!

And as always, thanks for reading. Go D-Backs!