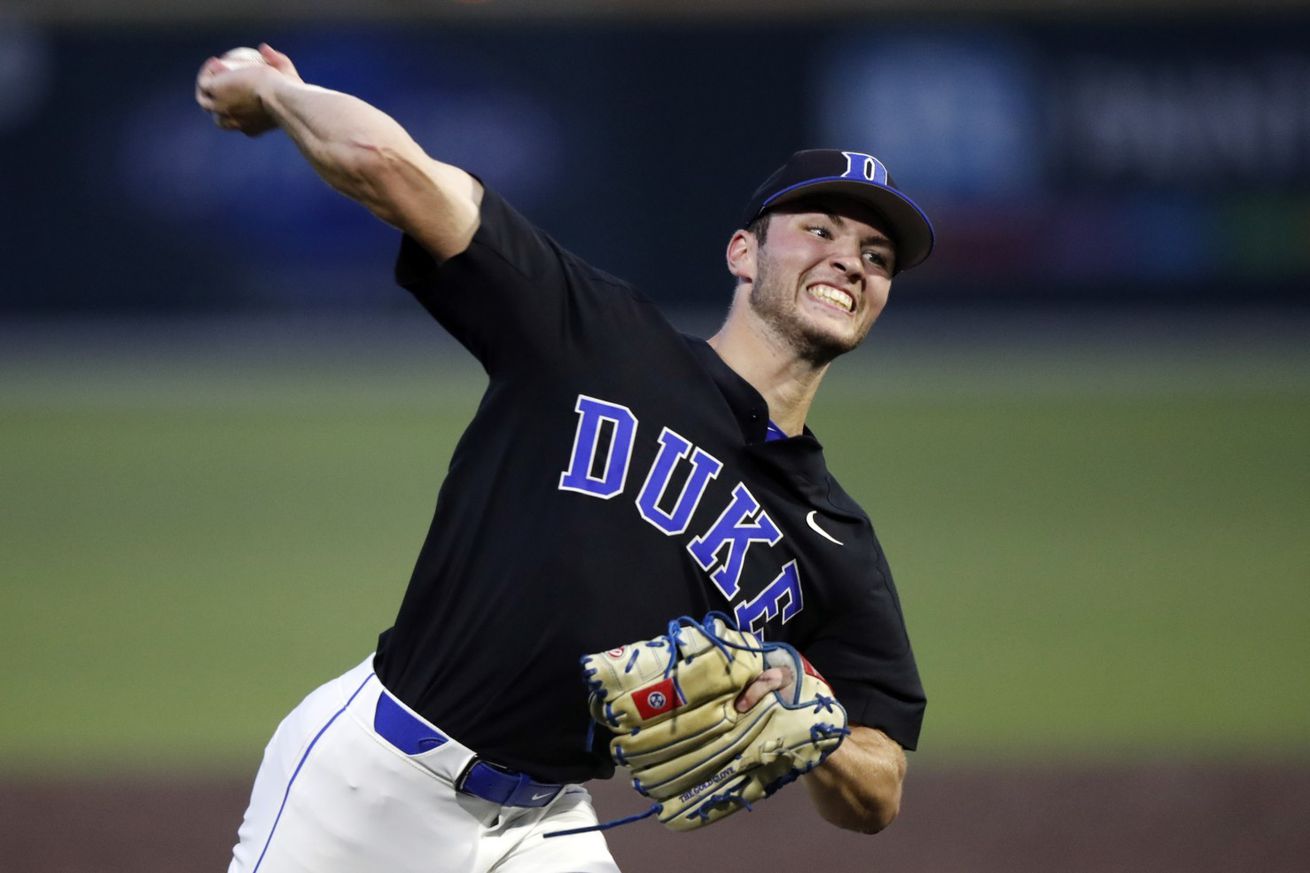 The Duke right-hander already has a perfect game under his belt.

Bryce Jarvis is about as polished a pitcher as one can hope to find at #18. Sure, Max Meyer was in this draft and could likely pitch in a Major League bullpen today. But as far as talent that fell down the boards some, Jarvis is a strong selection. Jarvis already sports a strong four-pitch mix.

Jarvis features pitches that are almost picture-perfect. He spent a significant amount of time working on and developing his pitches with Driveline Baseball. That work allowed Jarvis to increase his spin rate and velocity on his fastball, taking it from an upper-80s offering to a low-to-mid 90s offering. Jarvis also worked on making his change and his slider follow a similar path, using an increased spin rate on the change so that it nearly mirrors the slider as it is coming in before it simply drops off the table. Jarvis’ calling card is his work ethic and his ability to identify mechanical tweaks. It is not hard to imagine that he could have a fifth pitch in his arsenal by the time he reaches the majors.

Jarvis’ shining pre-draft moment came on February 21, 2020 when he threw a perfect game against Cornell, right before the COVID-19 pandemic shut everything down.

Jarvis is one of several big-time pitching risers in North Carolina, along with Wake Forest’s Jared Shuster and North Carolina State’s Nick Swiney. Jarvis didn’t pitch in the Cape Cod League over the summer, instead working to improve his game by working with Driveline and Cressey Sports Performance to improve his pitch mix and fastball velocity. The work paid off, as Jarvis increased his fastball from a pitch that topped out in the low 90s to a plus offering that sat 93-96 deep into outings early in the spring. That new fastball—combined with his already impressive secondary offerings—has taken his draft stock to a new level. Jarvis already had an impressive track record with Duke as a starter and reliever, racking up impressive strikeout totals no matter the role. After striking out 12.7 per nine during his freshman season primarily as a reliever, Jarvis whiffed 11.2 per nine in a split role as a sophomore. He was one of the most dominant arms in the country through four starts this spring, including a 15-strikeout perfect game against Cornell during the second week of the season. Jarvis has three potential plus pitches now, with a mid-80s slider and a changeup a tick below that range. The 6-foot-2 righthander throws all of those pitches effectively and showed above-average or better command in 2020 after walking more than four batters per nine innings as a freshman and sophomore. He works with a quick tempo and throws with a bit of effort and some recoil at times. It’s not the most fluid delivery, but it shouldn’t prevent him from starting at the next level either. Teams surely would have liked to see if Jarvis was capable of holding his newfound fastball velocity over a full season in a starting role. Now that that’s not possible, Jarvis is probably looking at a second- or third-round selection.