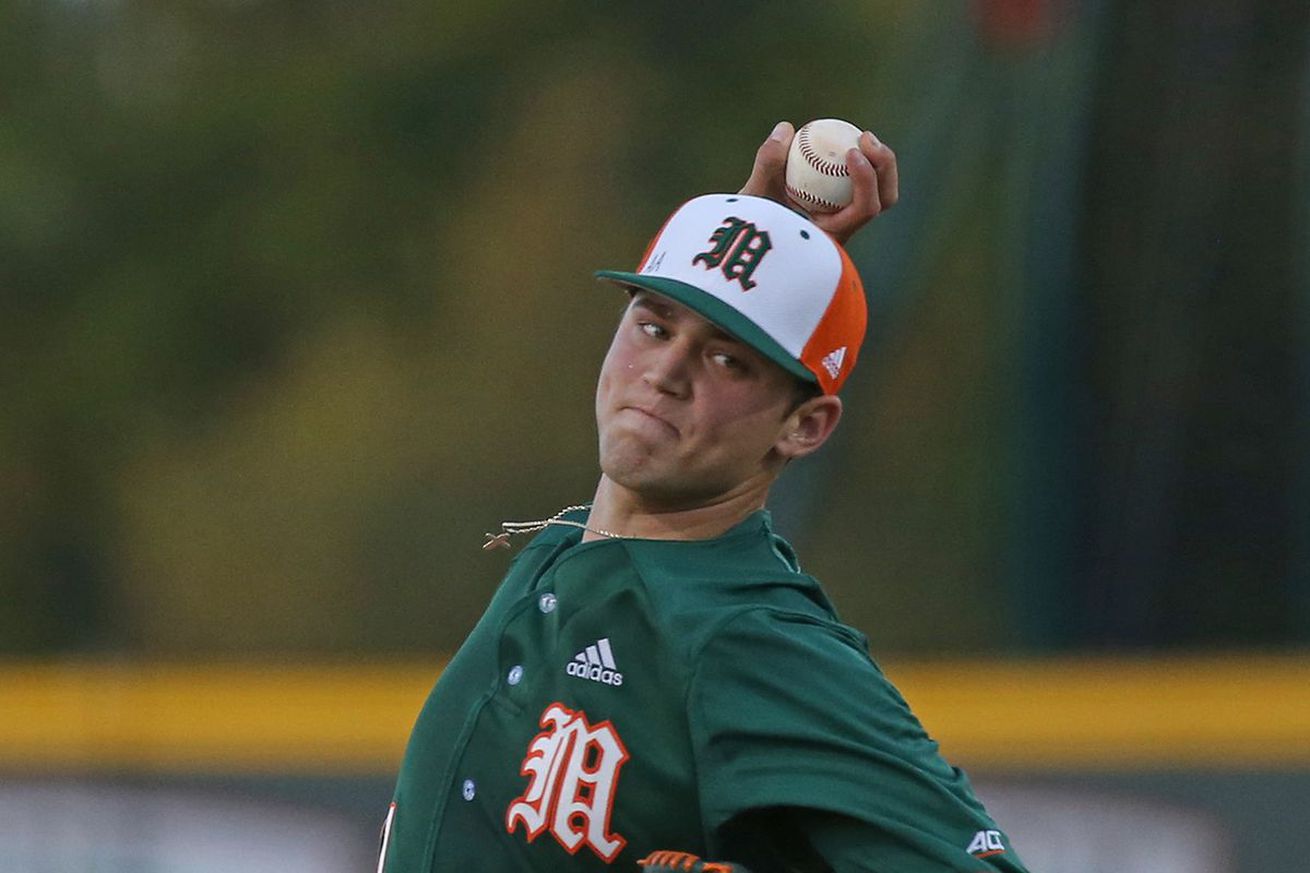 The Diamondbacks took another college pitcher at #33.

What Baseball America is saying:

Cecconi has one of the best pedigrees of any player in the 2020 class going back to his high school days, fitting in talent-wise with the top arms in a loaded 2018 prep pitching class that included Indians righthander Ethan Hankins and Vanderbilt righthander Kumar Rocker. Cecconi looked like a no-doubt first-round pick based on his summer looks entering his senior year in high school but pitched sparingly during the spring due to an injury and made it to campus at Miami as a result. His freshman season was solid, and he handled 80 innings, although the stuff wasn’t quite as loud as he showed in shorter stints as a high schooler. Still, he showed enough flashes that teams were convinced he was the same pitcher and would become a first-round candidate with another strong season as a draft-eligible sophomore. With the season cut short, Cecconi started just four games, pitching to a 3.80 ERA in 21.1 innings with 30 strikeouts and seven walks. In terms of pure stuff, Cecconi has more than any arm in Florida and stacks up with the better starters in the 2020 class. But having everything together at once has been a challenge for the 6-foot-4 righthander, who also saw his velocity tick down in his last outing of the year. At his best he runs his fastball up into the upper 90s with impressive life and has a slider, cutter and changeup that all flash plus. On top of the quality of Cecconi’s pitches, scouts like his frame and strike-throwing ability but believe he gets too much of the plate at times. At the moment, Cecconi fits in the second round thanks to his track record and performance, but his overall talent likely fits higher than that. Whether a team wants to take the risk to draft and sign him in that range is another question, and with additional leverage as an eligible sophomore it could prove difficult.

Cecconi, paired with Chris McMahon gave Miami a potent 1-2 punch at the top of their rotation entering the 2020 season. The CVID-19 pandemic cut that season short, giving both starters only four games to show where they were at now. Still, Cecconi showed he had the stuff to be a Friday night pitcher, despite only being a sophomore. While he is listed at BA as 212 pounds, he has filled out some since then. He now sits somewhere around 220 pounds.

Like Jarvis before him, Cecconi should be able to move up quickly through the system. There is little to no projection left with Cecconi. At his height and weight, he is already pitching with the body he is going to have for games. He is of a size that endurance should not be much of a problem, though full-season ball could actually slim him down just a smidgen as he starts putting in extra innings over extra months of play.

The biggest obstacle for Cecconi is going to be his control. Can he maintain his mid-90s velocity while working more around the edges? If so, he has a high ceiling and should have every opportunity to stick as a starter up through the Majors. If he continues to struggle with his command, catching too much of the plate with his offspeed offerings, then he still has a future as a high-leverage reliever.