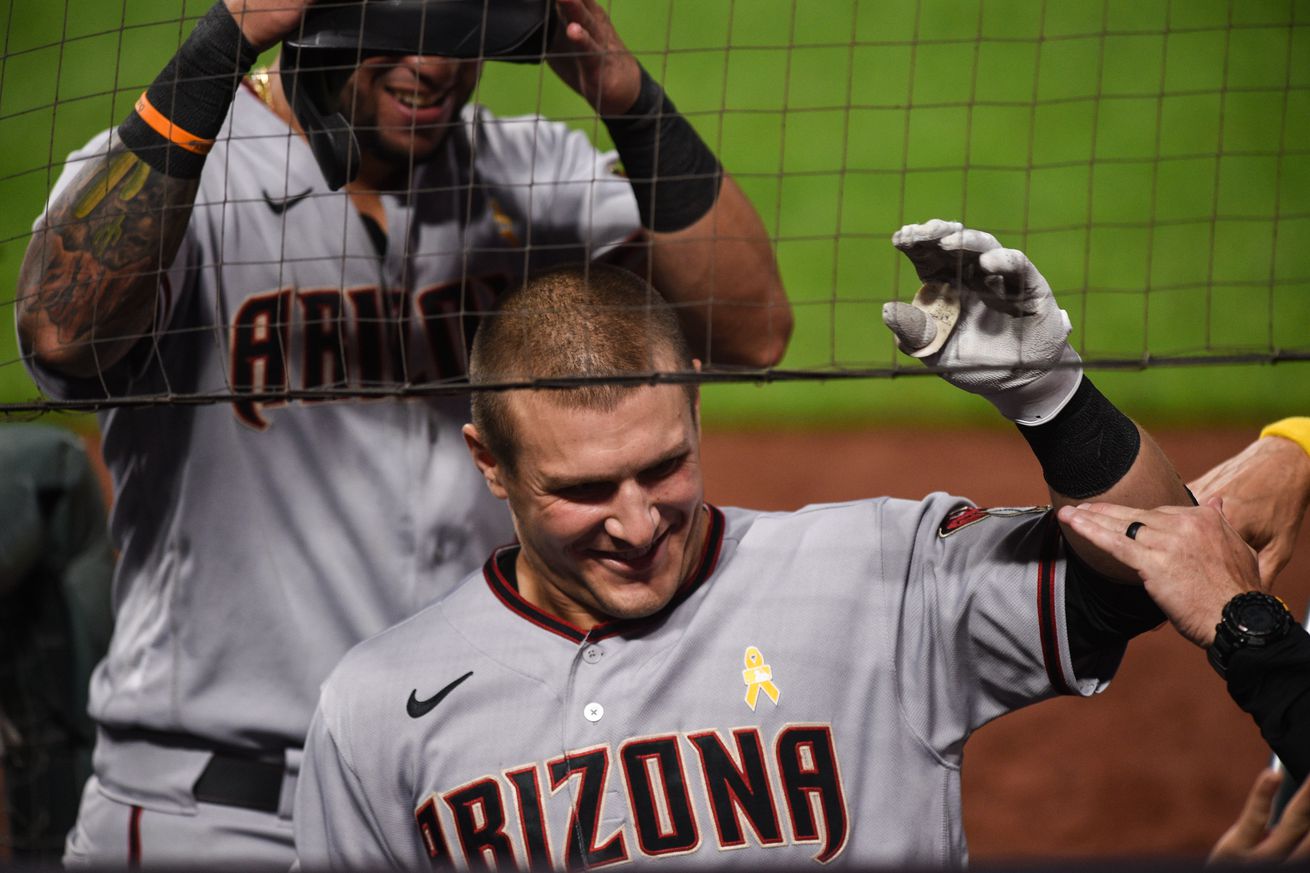 Madison Bumgarner made his return from the IL and to San Francisco wearing a Diamondbacks uniform tonight. While it was not what one would call triumphant return, it was a step forward in the transformation of Bumgarner into a finesse lefty.

Allowing two runs in four innings vs. the Giants, Madison Bumgarner’s first start off the IL was a mixed bag. pic.twitter.com/1RZ3RQ7gEt

The D-backs manufactured a run in the top of the first without a base hit. Kole Calhoun drew a 4 pitch walk from Trevor Cahill, advanced on a wild pitch and moved to 3rd on a ground out to the right side by Ketel Marte. Christian Walker hung in after going down in the count 0-2 to eventually lift a sac fly to right scoring Calhoun. It was classic get em on, get em over, get em in.

Bumgarner, throwing his first pitch as a Diamondback with a lead cruised through the first inning on 7 pitches to retire the side in order.

Josh Rojas drew a one out walk in the top of the second, and stole second base on a ball in the dirt. But Nick Ahmed struck out and Daulton Varsho grounded out to 2nd, stranding Rojas at 2nd.

In the bottom of the 2nd Evan Longoria smashed an 84 MPH cutter that didn’t get far enough inside. The ball flew over the left field wall to tie up the game 1-1. Darin Ruf followed that by crushing another cutter straight over the center field wall for a 2-1 Giants lead. They were the 8th and 9th homers allowed by Bumgarner this year. He got the next three hitters, but it was a 22 pitch inning, setting the stage for a short outing.

Carson Kelly lead off the 3rd with sharp single to left, but Kole Calhoun and Ketel Marte were unable to move him over to 2nd, striking out and popping out. Christian Walker smashed a double into the left field corner , his league leading 14th, but the slow Kelly had to pull up at 3rd. That was all for Cahill after just 42 pitches. It wasn’t clear if his hip was bothering him of if manager Gabe Kapler was using Cahill as an opener. He brought in lefty Caleb Baragar to face David Peralta who flew out to shallow left, ending the threat.

Madbum got two quick outs in the 3rd, but Wilmer Flores ripped a ground rule double to left on the 5th pitch he saw. Falling behind Mike Yastrzemski 3-0, Bumgarner battled and got Yaz to pop out to second base on a full count to end the inning. With 20 pitches thrown in the inning that brought the total to 49 through 3.

Eduardo Escobar singled to lead off the 4th, but went nowhere as Rojas, Ahmed, and Varsho went down in order from there.

In the bottom of the 4th Darin Ruf and Brandon Belt combined for 15 pitches to work back to back one out walks, driving up Bumgarner’s pitch count. But David Peralta managed to just barely snag a rope line drive off the bat of Daniel Robertson on the first pitch he saw and then Joey Bart squibbed the first pitch as well right to Ketel Marte and just like that Madbum was through 4 innings with 72 pitches thrown. A long conversation in the dugout with Torey Lovullo ensued but Mason never took the jacket off his arm and did not appear to have any interest in coming out of the game. That was to be all for him on the night however as Torey went to the pen the next inning.

While the final line of 4 IP, 2 runs on 3 hits, 2 homers, 2 walks and 2 strikeouts is nothing to write home about, he had pretty good command and essentially threw just two bad pitches.

The second Giants reliever of the night, Sam Coonrod came on to pitch the 5th and retired the D-backs in order.

Keury Mella started the 5th for the D-backs and promptly gave up a leadoff single to right from Mauricio Dubon. A force out by Austin Slater was followed by a base hit from Wilmer Flores and that brought the lefty Yaz to plate with two on. Torey decided to stick with his righty despite having lefty Joe Mantiply warming in the pen and it paid off as he got Yaz to fly out to shallow center. Mella then got Longoria to fly to center as well and the two runners were stranded.

After the DBacks went down meekly again in the 6th the Giants got on the board again in the bottom half. Mantiply came on and got two outs but also walked lefty Brandon Belt. He was replaced by Artie Lewicki who immediately gave up back to back triples to Joey Bart and Dubon, one off the left field wall and one off the wall fence in right. Belt went down and got a curveball below the zone but the fastball to Dubon was center cut. “Triples Lewicki” finally got Slater swinging but the damage was done and the Giants had a 4-1 cushion.

Daulton Varsho made a statement in the 7th, knocking a two-out homerun into McCovey cove to close the gap to 4-2. It was the first homer of his career and came off a two hit two RBI night in the previous game. He played another solid game in center as well. It seems the coaching he got from Torey Lovullo the last few days may have helped. Hopefully these last two games will kick start his big league career.

Lewicki bounced back pitching a scoreless top of the 7th inning. The Diamondbacks offense clawed their way bak into the game by plating another run with a couple of walks and an RBI single by Eduardo Escobar. Rojas struck out with the tying run on 2nd however and the inning ended with a 4-3 score.

An RBI single by Eduardo Escobar makes it a one-run game pic.twitter.com/oAXz9pWohh

Somewhat surprisingly Lewicki came back out for the top of the 8th. He struck out Belt but walked Daniel Robertson on four pitches with nobody warming in the pen. Bart then lined a single to center. Tim Locastro made a diving catch on a sinking liner and very nearly double belt off second getting the ball back in quickly. Slater then struck out swinging and Lewicki had redeemed himself. Somewhat.

Tony Watson came on to close it out for San Francisco and did so quickly, retiring the D-backs in order on 13 pitches, sealing the 4-3 win.

While it was a loss, we’ll take some moral victories. Bumgarner did ok. Varsho hit a homer. The team didn’t hit enough, but they kept the game close and it was entertaining.

Somehow the hitless Kole Calhoun managed to have the highest WPA for this game, +.65 on the strength of two walks. Eduardo Escobar’s RBI single netted him +.50 and Keury Mella’s outing was good for +.46

Wishing everyone and their families a safe evening and a good nights sleep.