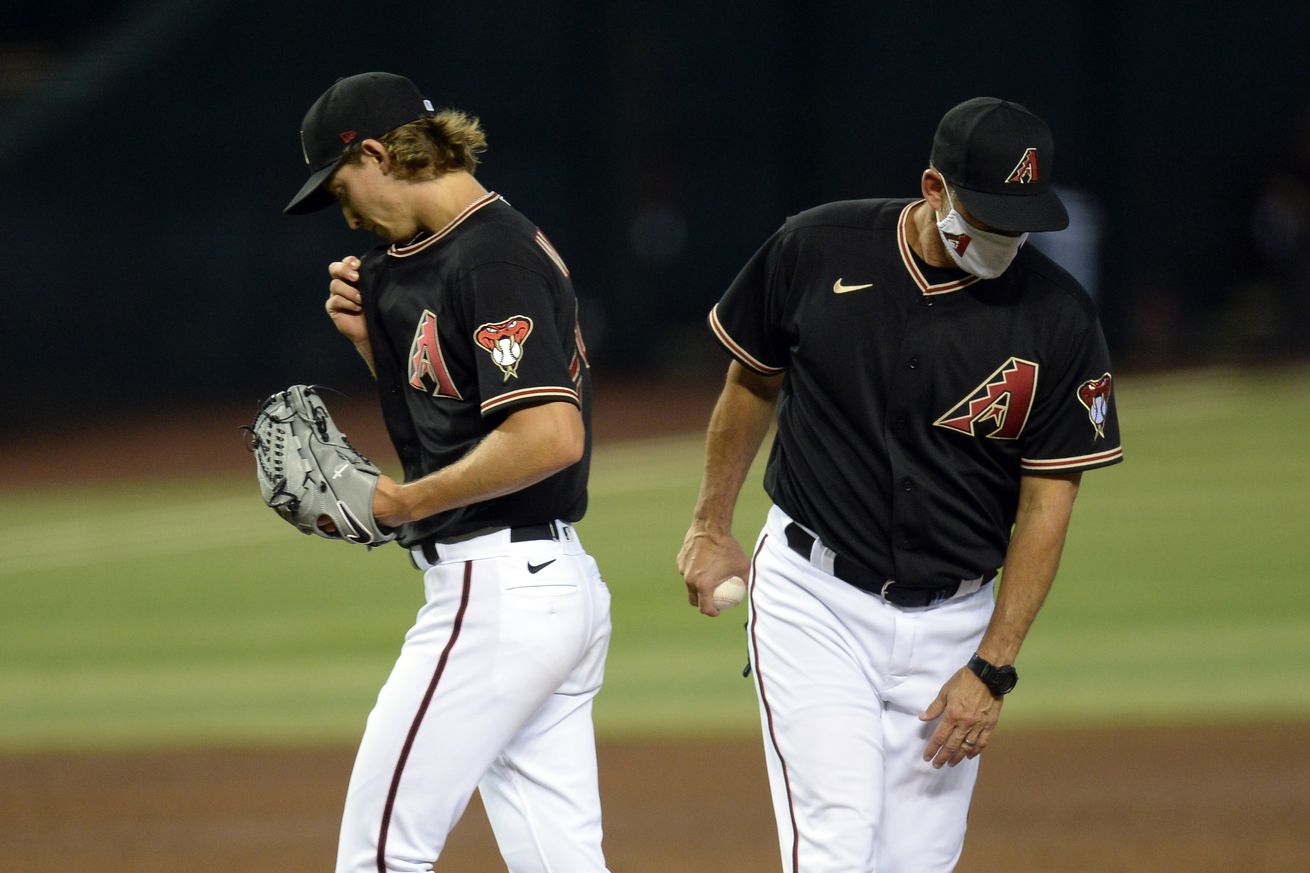 The Dodgers slugged four homers among their 7 extra base hits on the way to tallying 11 runs and Julio Urias held the Diamondbacks to two runs in 6 strong innings.

The game started off well enough for Arizona. Starter Luke Weaver stranded a one out double by Mookie Betts but otherwise looked pretty sharp, at least with his fastball velocity and changeup.

In the bottom half of the frame the Diamondbacks jumped out to a 1-0 lead. Ildemaro Vargas drew a one out walk. That was followed by a Starling Marte single and a sharp single up the middle by Eduardo Escobar scoring Vargas. The threat was shut down thereafter as Urias struck out Christian Walker on a check swing and got David Peralta swinging to get out of the jam.

In the 2nd inning Weaver stranded two more runners working around a walk to A.J. Pollock and a two out single by Will Smith by striking out the other 3 batters he faced that inning. His Changeup was really working and getting a lot of swing and miss. However Since98 commented in the game thread:

This turned out to be insightful and prescient on his part. Weaver actually got through the 3rd cleanly, stranding another double. But in the 4th inning things fell apart for him once again. A leadoff walk was followed one out later by a long homerun from Edwin Rios. The ball traveled 434 feet to centerfield, clanging off the girder above the homerun porch and the Dodgers had a 2-1 lead. One out later Matt Beaty pulled a cutter that didn’t cut down the line for another Dodger homer.

The D-backs answered back with a run of their own in the bottom half of the 4th thanks a Christian Walker double and a two out RBI knock by Carson Kelly, but that’s all they’d get.

Weaver came back out for the 5th and promptly walked Betts, than gave up a 113 MPH single to right to Corey Seager. In stepped the red menace Justin Turner who ripped another cutter off the wall in deep right center field, scoring Betts and Seager. That was all for Weaver as Torey Lovullo came out to get the ball.

Bob Brenly lamented several times during the 4th and 5th that Weaver should have realized he didn’t have his cutter and gone with the fourseam, change and curve. Instead Weaver therew 21 cutters, just 12 for strikes, and several of those “strikes” were extra base hits.

Yoan Lopez relieved Weaver and gave up a single to score Turner and then a homerun of his own to AJ Pollock. Despite an error by Ildemaro Vargas Lopez managed to get out of the rest of the inning, but the damage was done as LA emerged with an 8-2 lead.

From there the D-backs just flat gave up. A Ketel Marte infield hit in the 5th was promptly erased by a Vargas 5-4-3 double play and that was the last baserunner they had for the rest of the game. There were just four more at bats over the last 15 that even lasted 5 pitches , most of them being just 2-3 pitches long.

Taylor Clarke had two good innings of relief, and then a bad one, allowing 3 runs after getting two quick outs in the 8th. The big blow was a Chris Taylor homerun that closed out the scoring for LA.

The Dodgers hit 4 homeruns in 9 innings. The D-backs have hit 2 homeruns in 9 games. As a friend texted me, “Like Varsity against JV”. I can’t argue.

The 3-6 last place DBacks will go for the series split tomorrow when Merrill Kelly faces off against Clayton Kershaw. Game time is 1:10 P.M. Arizona Time