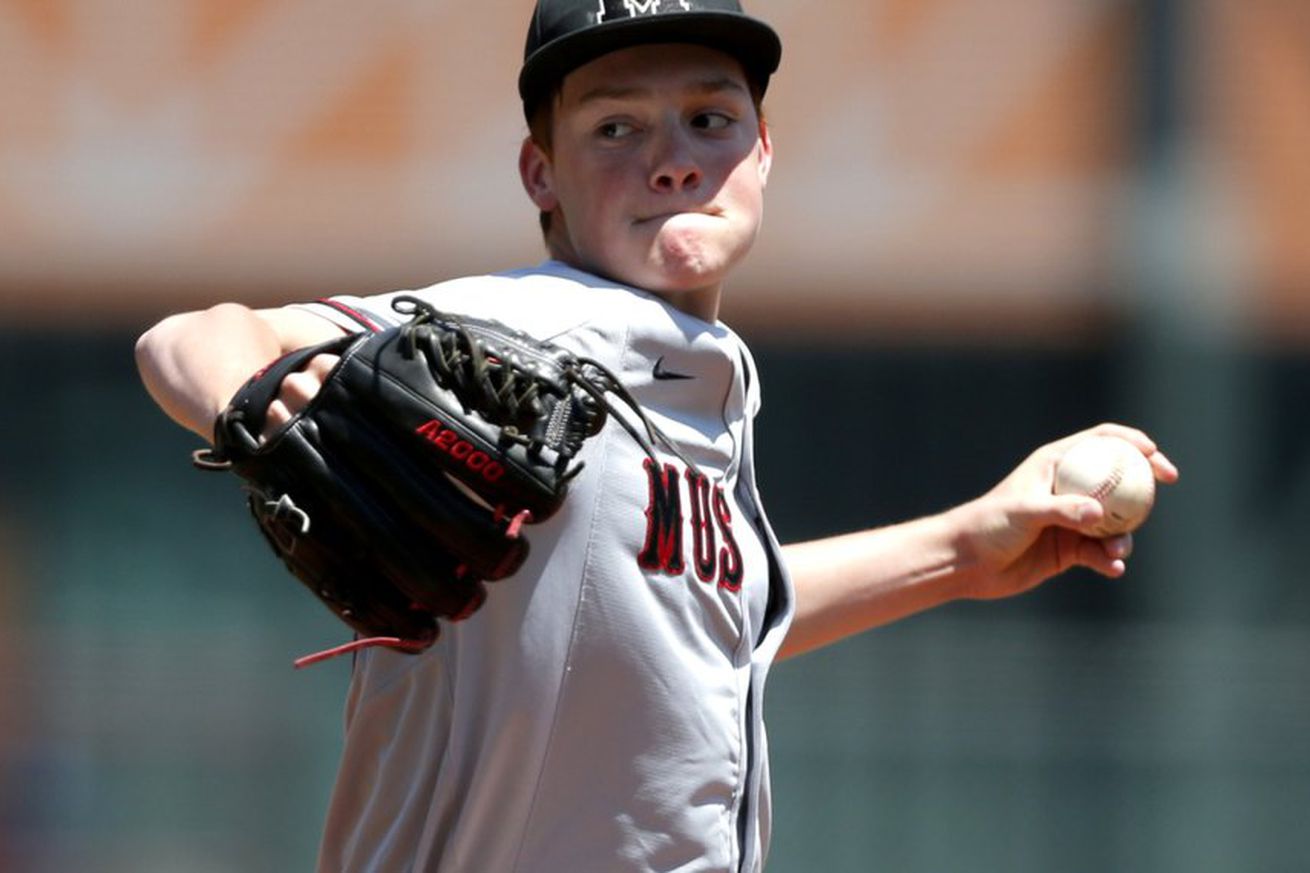 Dax Fulton throws a pitch during the 6A state baseball championship game between Mustang and Westmoore at the Chickasaw Bricktown Ballpark in Oklahoma City, Saturday, May 13, 2017. | Sarah Phipps/The Oklahoman

Taking a look at some of the top prep arms who could be available at the 33rd overall pick.

I’m very skeptical the team will target a prep arm with the 33rd pick with the large assortment of playable college arms the team will have to choose from, but I want to cover all the bases with the pick. There’s a slight possibility that enough college arms go in the 20s that the high school arms have the same amount of upside and can be signed at the pick.

Justin Lange, RHP, Llano HS (TX): Lange has a projectable 6’4” frame and comes with plus athleticism and fastball velocity. With the velocity and athleticism, Lange is a very raw pitcher with high reliever or total bust risks. If the D-backs want to take a chance on a pitcher who could be a moldable impact arm, they could throw caution into the wind.

Carson Montgomery, RHP, Windemere HS (FL): I watched Montgomery in June and he looked solid at the PG Showcase with a fastball velo around 93 MPH with a good slider. With only a solid 2-pitch mix and concerns about his delivery causing occasional command problems, there is significant reliever risk for Montgomery. He’ll need to develop a 3rd pitch in order to stick as a starter as opposed to a setup man.

Daxton Fulton, LHP, Mustang HS (OK): Of this group, I liked Fulton the most. Fulton comes with a very projectable 6’6” frame with an already playable fastball/curveball combination. Unfortunately an elbow injury and subsequent Tommy John surgery likely cost Fulton a shot at the first round. He may also be a tough sign since there will be time for him to refine his craft at the collegiate level and have a full year of starting, so he may need full slot at 33 to seal the deal. The combination of tall and a plus curveball gives him similar traits to 2019 first rounder Blake Walston.

Jared Jones, RHP, La Mirada HS (FL): Jones would be an above-slot signing with quality athleticism and a fastball that regularly hits 96. At the Perfect Game showcase, Jones was 94-98 in the first inning, but saw his fastball velo drop to 92-94 in the second inning. I believe he’ll be able to sustain velocity later into his appearances as he adds more muscle and incorporates more of his lower half in his delivery. Jones comes with significant reliever risk due to some considerable effort in his delivery, but has two secondaries that project to be above-average.

Alex Santos, RHP, Mount St. Michael Academy (NY): Santos didn’t get a chance to show what he could do in 2020 thanks to COVID, but he has a strong enough body to stick as a starter. He gets good spin on both the fastball and curveball, which fits the preferred mold of pitchers under Hazen, and has made strides on improving his physique and his change-up. Santos might have been able to sneak into the first round had there been a high school season in New York, but could still be signable at the 33rd pick.