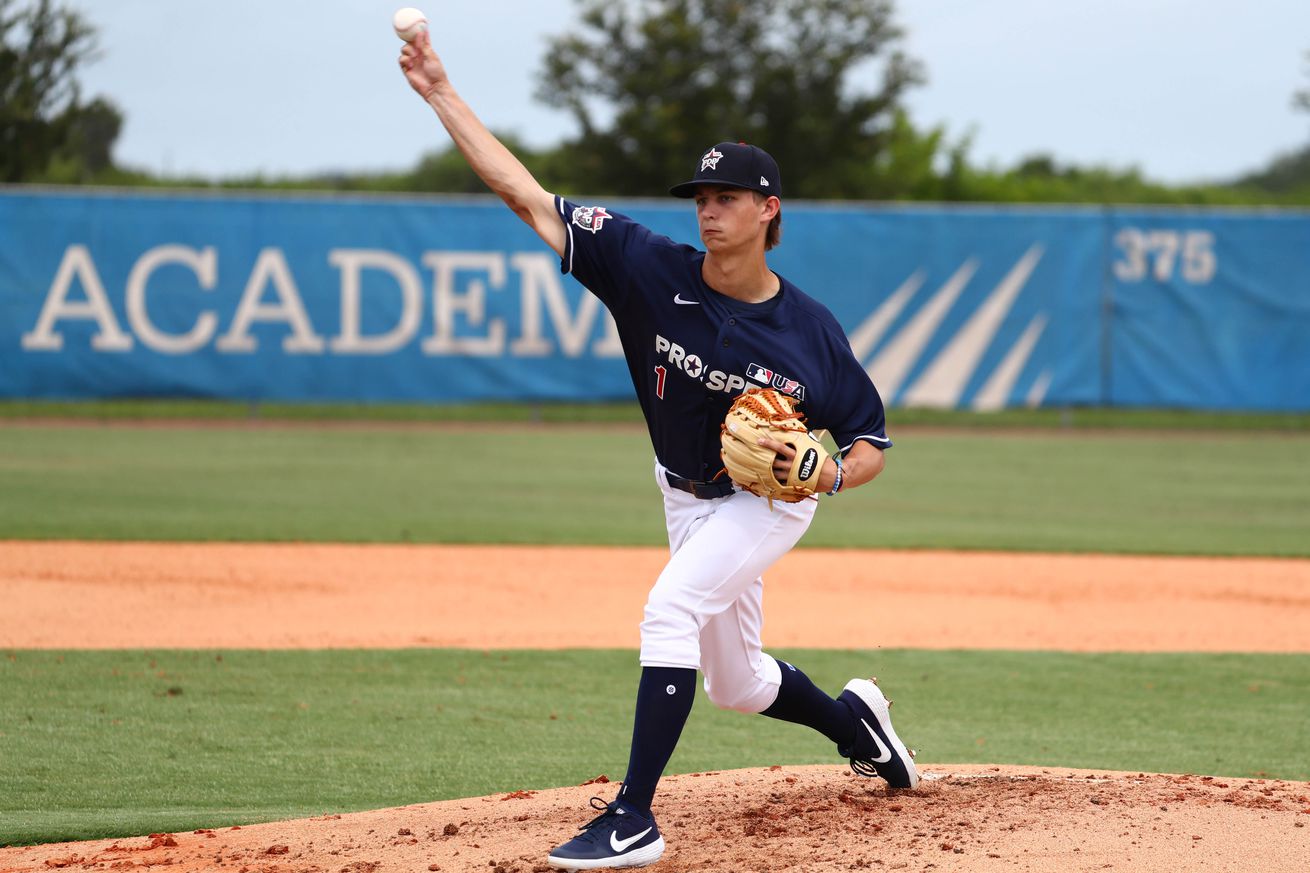 Of the three prep arms that project to go in the first round, Abel possesses the most long term upside although he’s the least likely to make it to the Diamondbacks’ top pick in the draft.

I’ve mentioned on both the Jared Kelley and Nick Bitsko scouting report about the team’s stockpile of arms and the team’s reported attention on the top three prep arms in the draft. Kelley and Bitsko are two of them, this report will cover the third player in that group.

Abel has the most upside of any prep pitcher in the class with potentially three swing-and-miss pitches between the fastball, slider, and change-up. He also mixes in a curveball, although it will occasionally blend with the slider at times. Abel shows solid enough ability to spin the ball that he should be able to develop the pitch in the future. Once he reaches the majors, he should be able to command a full mix of pitches at an exceptional level and develop into a potential top of the rotation arm.

Unlike Bitsko and Kelley, Abel offers more projectability down the road so you may see better raw stuff in the future. That comes with a trade-off of a longer development time because adding too much weight too quickly becomes dangerous. Abel has about 30 pounds to add onto his frame in order to get to an ideal playing weight of 220 or more.

Abel is one of three prep arms that have top of the rotation type potential and the D-backs certainly aren’t going to pass on that upside. Abel is the least likely of the three to make to the 18th pick, even though he does in Keith Law’s latest mock draft. The combination of now stuff and projectability gives Abel the best ceiling in the prep class of pitchers and the team can afford to chase upside for an extra year of development time in the minors.

The only reasons I can think of the D-backs passing on Abel has to do with the ability to sign him. Otherwise I don’t expect him to even be available with the D-backs top pick but I’m still doing this report because you never really know.

Unlike Bitsko or Kelley, I see Abel being a tougher sign for the D-backs. Abel could go anywhere as high as 6 to Seattle and as low as Arizona at 18. That could come with a significant signing bonus demand. This concern is addressed with the Cole Wilcox article, although I think Abel has more upside and less risk as a pitcher than Wilcox and the D-backs would be more willing to sacrifice some flexibility for a player of Abel’s talent level. My guess is the ballpark for signing him will sit around $3.8-4.5MM.

As Abel adds muscle mass, we could see his stuff tick up even further. The now stuff is good enough that he could start his first full year in the system with the D-backs Low A affiliate although the team will move him up slower than Kelley or Bitsko, who aren’t going to improve their raw stuff much between now and the majors. The final version of Abel has the potential to give the D-backs a playoff level ace and make them a World Series contender.