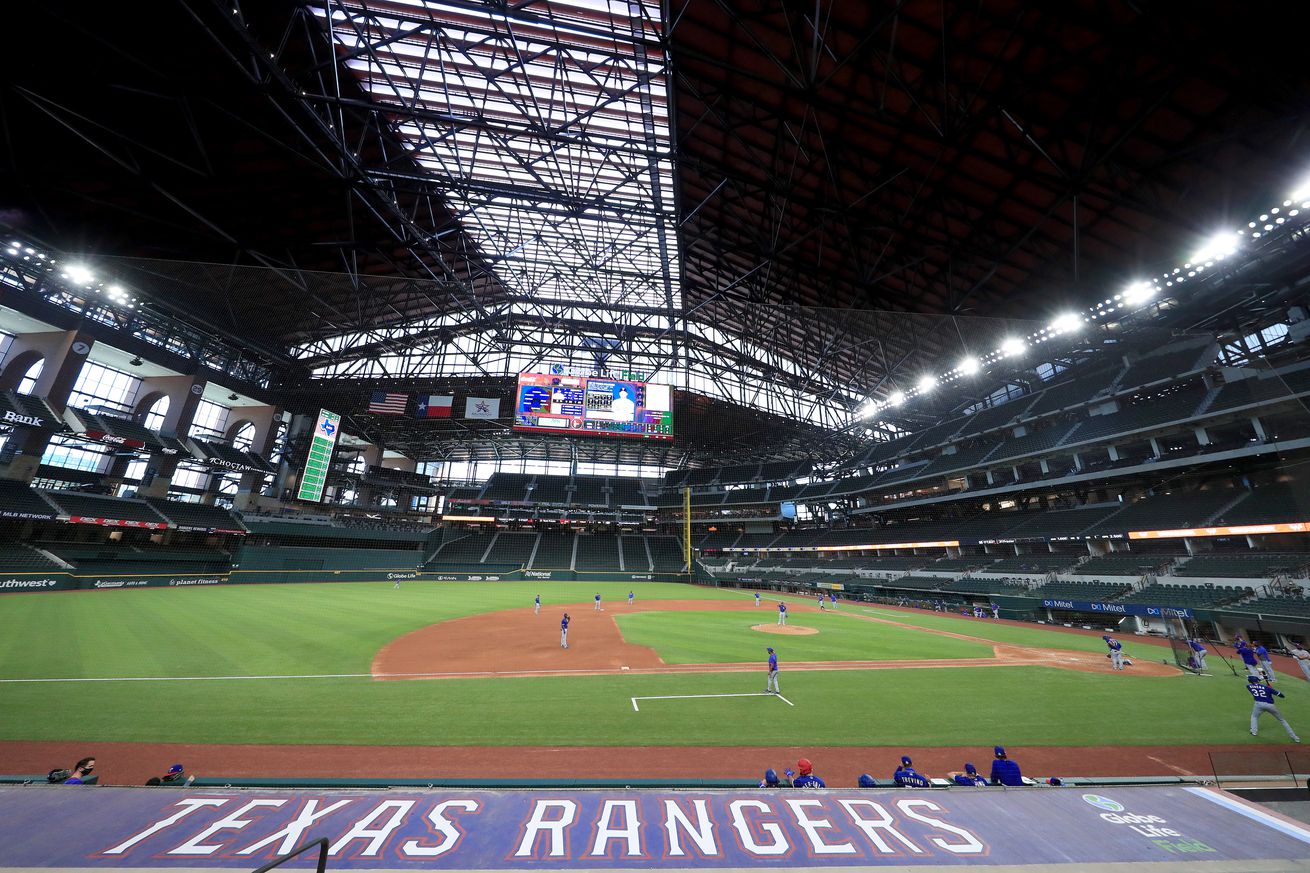 Will the Diamondbacks sweep the 2-game series?

What are the outfield characteristics of Globe Life Field?

Unlike Chase Field’s artificial-turf which was praised as softer than natural turf, Globe Life Field’s artificial-turf is about as hard as natural turf. “It really doesn’t feel like [artificial] turf. It’s the best turf I’ve been on. It doesn’t feel like there’s any lingering side effects from it. The playing surface is top-of-the-line. It doesn’t get any better than that.” — Joey Gallo

The outfield fences are deep. “It is playing big as hell….It’s a little deep I am not going to lie. Us hitters are getting a little nervous about that. But it’s a beautiful ballpark.”— Joey Gallo

When the roof is closed, the galactic slabs of dark roof contrast with bright natural light of huge side windows. “It’s not just the roof, but the side wall — it goes light, dark, light, dark, back and forth. It’s really tough on our outfielders.” — Chris Woodward, Rangers’ manager

“The angles of the fence are something I don’t think we were anticipating when we first saw the designs of the stadium. There are a lot of little ones you can’t see with the naked eye that, when it hits off, it shoots in a completely different direction.” — Chris Woodward, Rangers’ manager

“And [the ball] comes off the padding a lot harder than in other stadiums, so there is going to be some potential for easy triples or inside-the-park home runs.” — Chris Woodward, Rangers’ manager

Which Ranger players will be interesting in this series?

Joey Gallo is one of the top 5 outfielders in baseball. In 2019, his BA and slugging rose to career highs before injury ended his season. Will he return to his 2019 peak?

Will Rougned Odor be the power hitter that he is capable of being? Yes, if spring training is any indication. On 10 July, he was 6-for-12 with a double, two home runs and two walks over six simulated and intra-squad games.

I wondered, despite his offensive weakness, whether former D-back (2017 & 2018) Jeff Mathis would catch for the Rangers. The answer was yes! In the first two games of the season three catchers got into the game: Mathis, Chirinos, and Trevino. Robinson Chirinos was acquired in the offseason and sprained his ankle in summer camp. In addition, it appears the Rangers liked Mathis’ game-calling and Trevino’s offense.

In 2019, the pillars of the rotation were Mike Minor and Lance Lynn who appeared in 65 games. The remaining games were started by 17 pitchers. For this season, the Rangers kept their pillars and added Corey Kluber, Jordan Lyles, and Kyle Gibson.

How good is the Rangers’ rotation? Anthony Castrovince wrote, “…you have the seeds of what could be a top-flight starting five [7th best in the Majors], with former top prospect Kolby Allard an important depth piece.” Let’s look at the additions to make an informed opinion.

How do the Rangers compare to the Diamondbacks?

First, let’s look at the 5 positions in the middle of the field.

Although the teams are equal in top-two starting pitchers and center field, the Diamondbacks have an advantage in catcher, second base, and short stop. Next, let’s look at three other factors.

All things considered, I predict the Diamondbacks will sweep this 2 game series.

How does Chris Woodward manage the Rangers?

Before we look at Chris Woodward, please understand that in the context of this series, Torey Lovullo is clearly the better manager. Now, let’s proceed.

For a second year, Chris Woodward is managing the rebuilding Rangers. He has four strengths:

His culture has three pillars:

“A player might not win a championship, but he could be considered a champion, just by the way he conducts himself around his teammates, the way he plays the game, the fight he goes through in the struggles, in the good times. It really defines the person. I believe that that’s what defines a champion, and if you get a group of guys believing that same mentality, you’re going to be tough to beat.” — Chris Woodward

They’re excited. They’re ready to take on the challenge and that’s all I can ask — just be fearless when they compete.” — Chris Woodward

“It’s such a negative game. For a lot of us who have been around it and been around the negativity your whole career, it will literally destroy you. It will eat you from the inside out. It did it to me. That’s personal experience. I failed because of that. But then I thought. ‘I’m going to battle. I’m going to scratch and claw for everything I get in this game.” — Chris Woodward

“I’m not going up to the plate with a smile on my face. I’m not confusing being positive with just a pat on the butt and saying, ‘Hey you’re OK.’ I want our guys to fight. I want them to be relentless everyday.” — Chris Woodward

“I don’t like to lower expectations…Just say, ‘OK, this is good enough. As long as you’re always reaching higher.” — Chris Woodward. One aspect of process is players can learn and grow every single day.

“Process is a big one for me, I don’t like to think of results. I think young kids, young players nowadays, they get caught up in results. … I want to drive home the process that’s going to get them the results.” — Chris Woodward