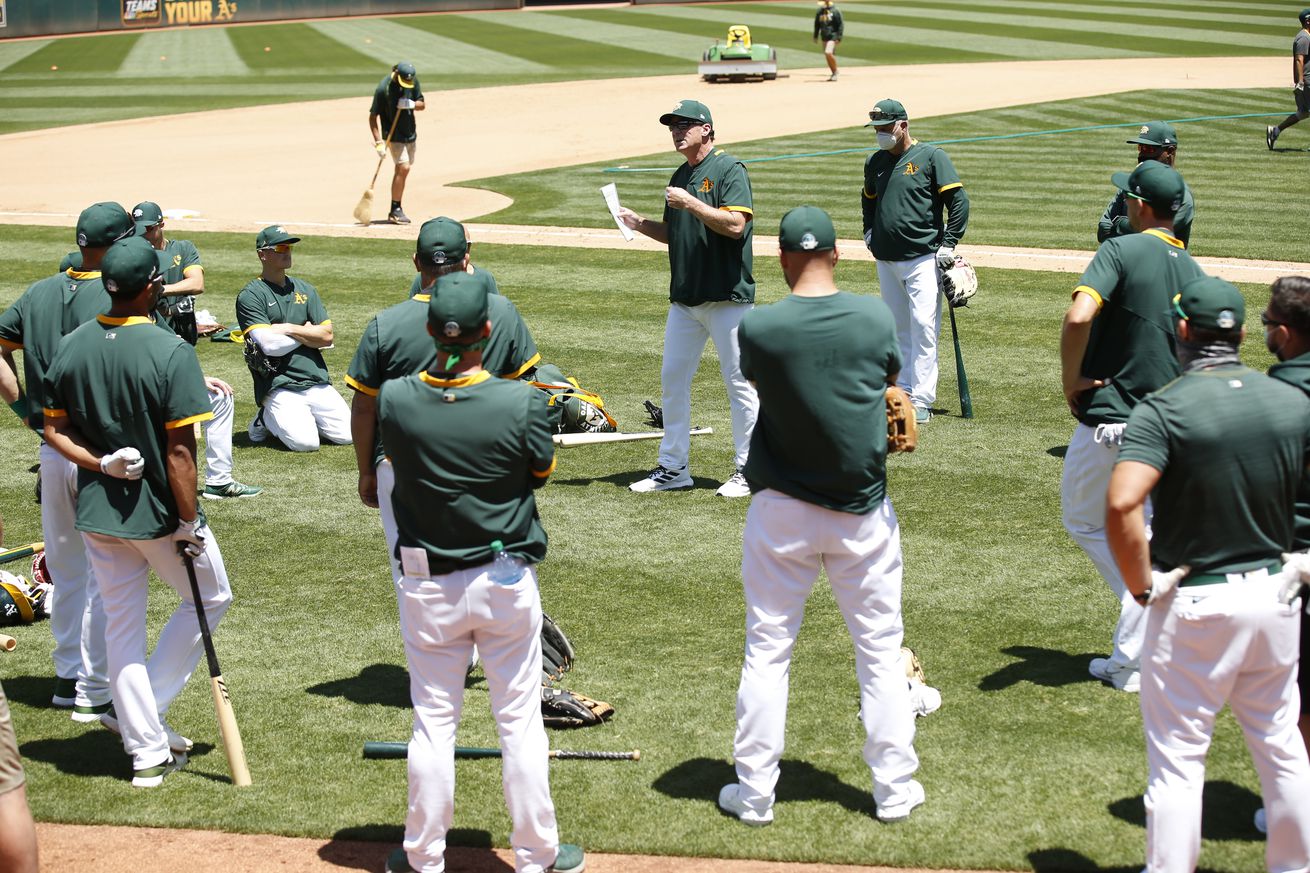 “The earth has music for those who listen.”

The Athletics are dominating the AL West.

Their 71% winning percent through 15 August puts them solidly in first place in the AL West; the next best teams are the Rangers at 53% and Astros at 50%.

The Athletics outfield’s 1.9 wins above average ranked first in the Majors through 15 August. Their four primary outfielders are outstanding hitters. Robbie Grossman is hitting the ball harder than last season. Recently, Stephen Piscotty is in-the-zone. On 4 August against the Rangers, he hit a walk-off grand slam. On 14 August against the Giants, in the top of the ninth he hit a grand slam to tie the score. The Athletics won in extra innings.

The Athletics relief pitchers’ 1.4 wins above average ranked first in the Majors. In the offseason, the Athletics snagged TJ McFarland off waivers from the Diamondbacks. This season, TJ McFarland pitched 8.2 innings with one earned run.

Which catcher is better — Sean Murphy or Carson Kelly?

Both catchers are 25 years old, and neither is known for his excellent hitting. The difference is in pitch framing where Carson Kelly is better. Statcast measures framing as strike rate in the shadow zone:

This is league-wide, but we’ll be showing it by batter and pitcher. And catcher too.

We’ll also eventually break up the Shadow zone for catchers especially (by bat-side and/or pitch-type and/or pitcher). pic.twitter.com/lFcwGedE9p

Perhaps Zac Gallen’s pitches work better as a group (via sequencing & deception) than individually. That conclusion came from three things he said:

Bassitt’s latest start was his worst of the season, allowing 4 earned runs in 5.2 innings. For that reason, this match-up is slight advantage Diamondbacks.

In Luke Weaver’s first four games, his ERA was 11.85. In the first three innings of those games, his ERA was 3.0. If I am the manager, I pull him after 3 innings. No exceptions. Jack Sommers tweeted that Weaver needs to fix his cutter. That is a secondary problem.

Luke Weaver on the struggles with the cutter pic.twitter.com/yJS51e8S9K

On Friday and again on Sunday, Montas was scratched because upper back tightness. This season, Montas has not allowed a homer. This is an opportunity the the Diamondbacks to hit a homer to break his streak.

This match-up is advantage Athletics.

This season Merrill Kelly’s four starts have been at least 6 innings. That’s great because after Weaver’s start, the bullpen will likely need a day of light work.

This match-up is advantage Diamondbacks.

This will be Alex Young’s second start of the season. His first start exceeded my expectations. He pitched 4.1 innings with 5 strikeouts, 1 walk, and 1 earned run.

These pitchers are relatively young (ages 26 and 28). This match-up could be a pitching duel by two pitchers showing off their best stuff.

This match-up is advantage Diamondbacks.

UPDATE: Which super-star third-baseman (Nolan Arenado or Matt Chapman) will perform better against the Diamondbacks?

Reminder: Points are earned as follows:

Results to date for Nolan Arenado:

He was friends with Bob Brenly. From 1986 to 1988, he was the secondary catcher for the Giants (primary was Bob Brenly). During those years, they became the best of friends. The following offseason, Melvin was traded to the Orioles and Brenly was released.

Later, when Brenly was manager of the Diamondbacks, he picked Bob Melvin as his bench coach. They coached the Diamondbacks to back-to-back NL West titles and a World Series victory! Friendships can make a difference!

His attitudes supported him in adversity. The Mariners fired him after two seasons. He absorbed the news stoically. He said, “There’s no ill will…When you get fired as a manager, you get experience going into your next job.” He confidently looked forward to working for another team.

The Diamondbacks did not select Bob Melvin as their new manager. This was followed by a four-day media storm covering their choice’s financial problems and legal problems. It takes character to admit a mistake, which Ken Kendrick did, “…that was one of the biggest public mistakes I made.”

The Diamondbacks offered their manager job to Bob Melvin. His attitude was their previous bad choice was no cause for enmity towards the Diamondbacks. He enthusiastically grabbed his opportunity. Bob Melvin said, “This really is a dream come true. There’s nowhere else I’d rather be than here.” Talking about hiring Bob Melvin, Ken Kendrick said, “But sometimes great success that you have in life comes out of one of your mistakes…”

“As regular readers are well aware, I also question Melvin’s skills at lineup construction. While I can believe the theory that continuing to play Gonzo is at least partly the result of outside pressures, things like having Counsell batting leadoff are entirely his decision. And that’s something which has been obviously A Bad Idea for about the past six weeks. We saw on one gameday thread, you’d have got a more efficient batting order by reversing the lineup completely.” — Jim McLennan’s Melvinesque Thoughts July 11, 2006

“Bob Melvin had a knack for running out a different lineup nearly everyday being dubbed later on [2007] as the “mad scientist” by Mark Grace and Daron Sutton.” — Keegan Thompson

“His in-game strategy will include persistent lineup shuffling, slow hooks on his starting pitchers and bullpen matchups that will combine statistical analysis and “gut” feel.” — Jim Bowden

His first big success was NL Manager of the Year with the Diamondbacks.

“…a worthy winner, turning one of the lowest payrolls in the league into a division title and pennant series.” — Jim McLennan

“He did an amazing job keeping a team of very young players together as a cohesive unit, and kept them from getting too down on themselves when things got bad. He dealt with injuries to three major players. He had the craziest lineups all year ‘round. He pushed almost all the right buttons at almost all the right times. In the end, he took a group of guys nobody’s ever heard of to the NLCS.” — snakecharmer

One big success was not enough.

AL Manager of the Year, 2012. “… despite the second lowest payroll in baseball and no less than eight key injuries to regulars, …as Oakland’s roster had 17 rookies at the end of the season. The A’s improved as the season went along, posting the best record in baseball (68-33) after starting the season 26-35.” — Clarence Baldwin Jr

“I can’t say that I’ve been with a team with so little expectations early in the season to end up where we did — pretty magical season.” — Bob Melvin

AL Manager of the Year, 2018. “…with guys getting hurt and guys moving around, I think his leadership… focusing on the guys that were here and really just moving forward every single day. …the team that won 97 games [a 22 game improvement].” — David Forst, Athletics General Manager

“I’d trade in all three [manager of the year awards] for a [World Series ring].” — Bob Melvin