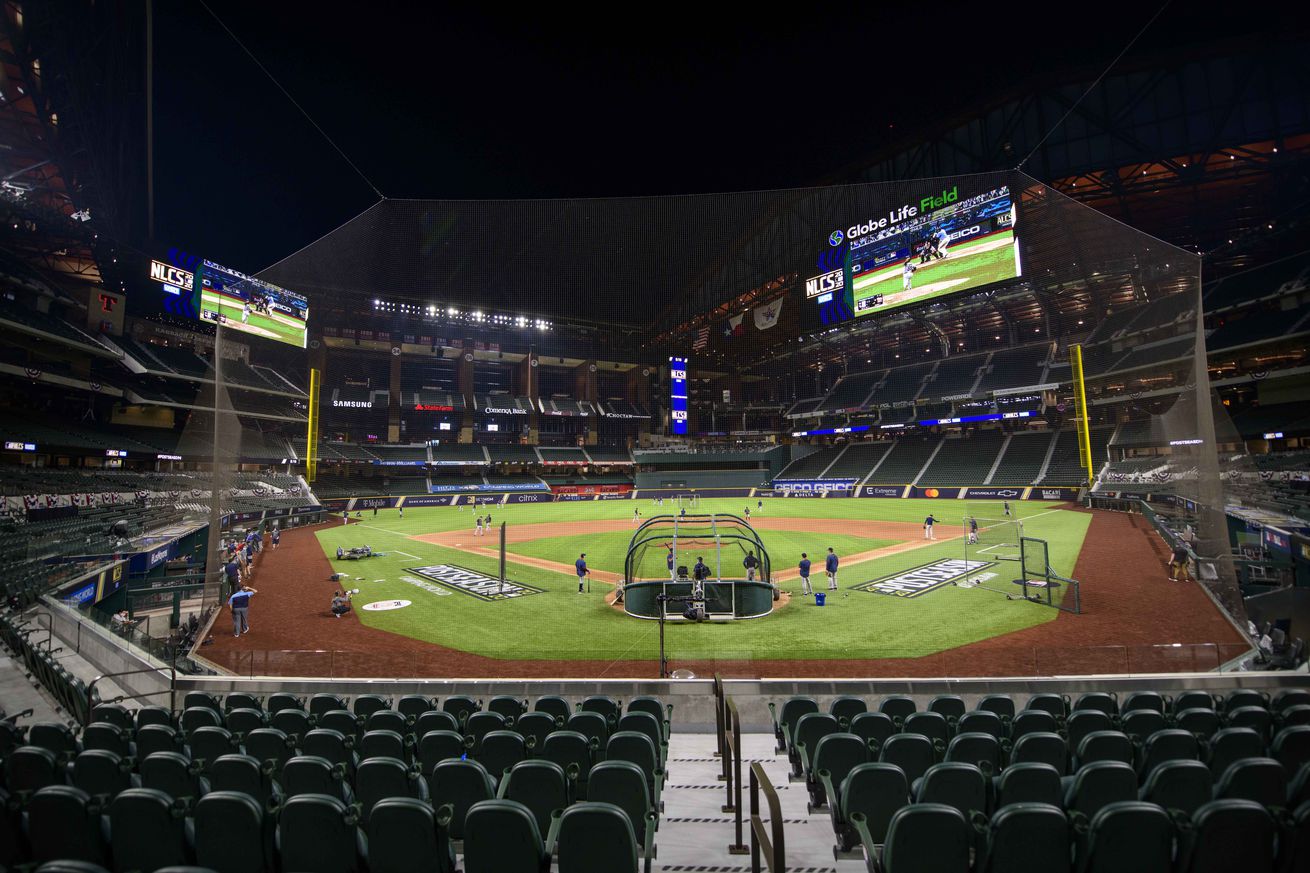 Braves and Dodgers will meet in Texas for the NLCS while the Astros need to sting the Rays in game two of the ALCS.

Urueta has been with the Diamondbacks organization for a long time, but the 2020 season was his first as Torey Lovullo’s bench coach. He actually interviewed with the Red Sox after they dismissed Cora. That doesn’t mean Urueta will get another look this winter, but he fits the modern mold and he should receive more interview opportunities over the coming months.

What a relief! Rays escape Game 1 with win

The Astros struck first, but the banging came from Randy Arozarena as the Rays take the first step to the 2020 World Series with a 2-1 win. Blake Snell grinded through 5 innings and got out of the jams giving up a sole run, while losing pitcher Framber Valdez gave up a walk too many in 6 innings. Both bullpens kept clean sheets, allowing the game to be as close as it can be.

Charlie Morton starts for the Tampa Bay Rays and Lance McCullers Jr. for the Houston Astros in the second game of the American League Championship series.

Globe Life Field in Arlington welcomes the undoubtedly two best teams in the National League in the first game of a seven game National League Championship series. Max Fried will take on some serious opponents this time while Walker Buehler tries to get past 4 innings. Travis D’Arnaud will try to stay hot as hell and fire the Braves past the Dodgers in the Texas grill.

Why MLB has a brain drain problem in front offices; and how the COVID-19 pandemic accelerated it

Even now, as the expanded playoffs continue, teams continue making cuts to their scouting and player development staffs. The upcoming winter is not expected to be kind. Teams will be steeling themselves for the second of potentially three compromised seasons in a row: two because of the pandemic, one because of a work stoppage. In 10 years’ time this stretch could be viewed as the beginning of a transformative period for the industry, and specifically for front offices.

MLB coach Alyssa Nakken was included by the US magazine amongst the “most powerful, most influential and most outstanding women in sports right now”. Nakken became the first woman to coach full time in Major League Baseball. She was hired as an assistant under San Francisco Giants manager Gabe Kapler and this summer she replaced the first base coach during exhibition games against the Oakland A’s, becoming also the first woman in MLB history to coach in an on-field capacity.

The outbreak is the second in NPB in recent weeks. In late September, four Hanshin Tigers players and a staff member tested positive for the virus. The news of the Lotte outbreak comes just a day after a meeting of the NPB-J. League COVID-19 task force, where the two leagues said they would explore the possibility allowing more fans to attend games.

Mitsuo Kaku, who leads the medical panel, said the panel had been given a hypothetical case in which a 60,000-seat venue was filled to capacity. Data from the case, he said, indicates that if those in charge of venues follow COVID-19 precautions, the risk of infection could be lowered.

South Korea: KBO to wrap up regular season on Oct. 30

The Korea Baseball Organization (KBO) unveiled the schedule for 34 makeup games, to be played from Oct. 20 to Oct. 30. Those games were rained out earlier in the year. The start of the regular season was delayed by the coronavirus outbreak, from March 28 to May 5, but the league stuck to the usual 144-game schedule. The KBO is hoping to crown the Korean Series champions before the end of November.

Dwelling up news from European baseball is sometimes like looking for a needle in the hay, but here we go: Sofia Blues win the Bulgarian championship in 3 games in a best-of-five over the Buffaloes Blagoevgrad, while the Espoo Expos claim their 17th championship in Finland crushing the Tampere Tigers. The Hoboken Pioneers apparently clinched the title in Belgium.

The Mexican winter league hopes to become the only league in 2020 so far to start its season on schedule when games start this Thursday. A lot of stuff that goes on in the MLB can be experienced south of the States; with Mexican players wandering around with the virus, discussion on fans in the stands or not, domestic violence concerns and a former Dodger Cy Young winner moving a franchise.

The WBSC will broadcast games from the Panama baseball league that started last Friday. This year former Diamondback Enrique Burgos will be representing the Province of Coclé. Burgos joined the D-backs organization back in 2008 and pitched 68.1 innings combined in the MLB to a 5.27 ERA in 2015 and 2016. He got designated for assignment in May 2017 to make room for Reymond Fuentes. WBSC’ broadcast channel can be found here.

Tyler Acosta was drafted in 2018 by the Arizona Diamondbacks in the 39th round. After careful deliberation, Acosta opted against signing. And there hasn’t been one iota of regret. “I’m super happy with the decision we made,” he said. “With my development in the last two years, I know I’ll be ready for pro ball when the next opportunity comes around.”